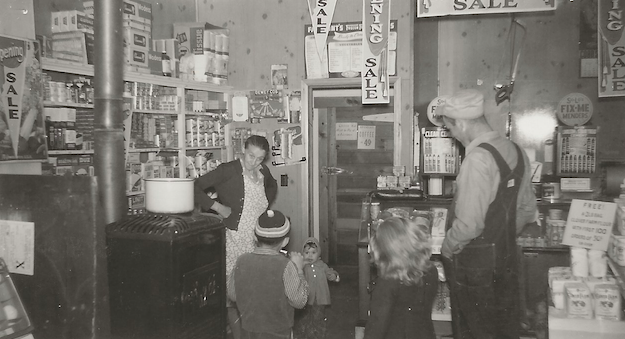 Mary Englebert stands behind her grandmother Emily Coisman Englebert (left) at the Clover Farm Store in Forestville. The older man is Louie Englebert. The boy and girl in the foreground were not identified. Submitted.

Gilbert and Agnes Englebert built their Clover Farm Store next to their home in Forestville in 1946 and owned it until 1967. Their daughter, Mary Englebert Neinas, remembered that it was a busy village back then.

“I grew up in the store,” she said. “Ours was one of three grocery stores in Forestville for a population of just a few hundred. There was also Schlise’s Market and another operated by the co-op, but people shopped locally in those days. They didn’t drive to Sturgeon Bay or Green Bay for groceries.

“Farmers would drop off their wives’ shopping lists and then leave to run errands in the village,” Neinas recalled. “Those errands could have been going to Mark Schlise’s Implement Store for machinery parts, to the local feed mill, also run by the co-op … or sometimes visiting one of three local taverns for a ‘quick beer’ before stopping by to pick up their groceries before heading home.”

Besides selling groceries, Gilbert Englebert also provided another service for customers: He cut up sides of beef and pork that they could keep in the store’s freezer lockers.

“He also made Belgian trippe, using his mother’s popular recipe,” Neinas recalled. “Another big item was ground and seasoned raw beef, purchased by local taverns to feed the baseball teams the tavern keepers sponsored. It was common for the players to stop at the taverns after their games to enjoy a lunch and a ‘beverage or two.’

“The baseball field was located behind the Legion Hall, and games provided family entertainment for many of the villagers. This was life in a small town. Everybody knew everybody, and it was a great place to grow up.”