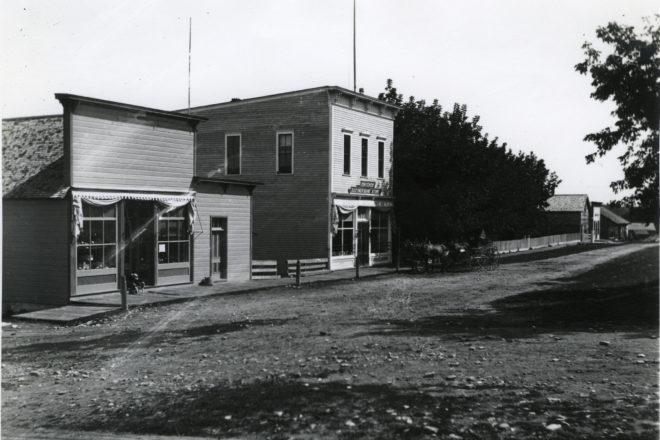 The Hill brothers are credited with building the two-story Fish Creek General Store in the heart of the little village in 1895. Wallace Hill was the architect and contractor, but the title L.P. Hill & Co. headed the business stationery in March 1904. The company advertised itself as dealers in general merchandise, fresh and salt fish, and farm produce. A large wood stove sat in the middle of the store to keep products from freezing during the long, cold winters.

The store changed hands at least twice – there is a reference to a McLeod as an owner prior to the Poiriers’ purchase in 1914 – before Lester and Amanda Schreiber purchased it in 1916, beginning a long run for the family in the heart of the village. In the history of his family, son Edward Schreiber wrote that his dad’s father and stepmother, Ed and Lottie Schreiber, loaned Lester and Amanda the money to buy the Poiriers’ store, which was “badly in need of being upgraded into a viable business.”

Edward recalls that his parents spent several months cleaning and remodeling the building and planting a large vegetable garden behind it to provide produce for the store. As Cottage Row was beginning to develop, Lester walked up that street every morning, collecting an order from each house and later delivering the orders in a two-wheeled cart.

Those residents and many others in town were eager to purchase baby carrots and baby beets for 10 cents a bunch. Lester also built a chicken coop behind the store and an enclosed running yard under the stockroom. The hens supplied the store with fresh eggs and sometimes a few chickens to sell.

Edward recalled that his father was very liberal in extending credit to customers, sometimes carrying them all winter when money was scarce and there was no Social Security or other government programs to help families in need.

“Most paid up when they were able,” Edward wrote, “but many left Dad holding the bag and never made payment.”

At a time when there was little or no land transportation, all of the freight for the store had to come by boat from Marinette. Each fall, Lester had to order the winter’s supply of groceries before Green Bay froze over. One year, a furious storm sank the boat carrying the supplies, and the entire cargo was lost. There was no insurance, and the law required that Lester pay for the loss.

When Lester went to work one morning in 1940, he found that the store had been robbed during the night by someone who had gained entrance through a window, smashed the safe and made off with all the money in it. The sheriff inspected the scene, but the burglar was never caught.

Edward worked in the shipyards during WWII and was his dad’s partner in the store. After Lester was no longer able to work, Bob and Edward became partners until Bob’s death in 1970, by which time the store was called Schreiber’s Complete Shopping Center. Edward sold the store later that year to Gerald and Ann Norz, who placed their own distinctive mark on the grocery’s history.

Geri (pronounced Gary) Norz was born in Switzerland and spoke five languages. Before settling in 1965 on a farm at the corner of County A and Gibraltar Road, he and Ann had bounced around Europe while he worked for General Foods after graduating from the University of Pennsylvania’s Wharton School of Business.

When they purchased the Fish Creek Market in 1970 and affiliated it with Red Owl, they had no background in managing a grocery store – or any small business, for that matter. But they liked to eat, they said, and Geri just didn’t want to wear a tie to work anymore. Edward Schreiber helped them to learn the ropes.

It was important for Geri to master the art of butchering. He studied a book called Fachbuch: fur das Metzgereigewerbe – fortunately, German was one of the five languages in which he was fluent – and the couple traveled to Germany to learn from butchers firsthand and to collect recipes for the authentic Swiss brats and sausages and the potato salad for which the store became known.

Like the Schreibers before them, Geri and Ann maintained a general store, carrying nongrocery stock such as Coleman fuel for campers, plus rope and other necessities for boaters, in the basement. They made car keys, sold paint and fixed broken windows and screens, but they never sold alcohol. Ann hand-washed all the white aprons that the employees wore and hung them on the clothesline out back to dry.

Although they had a home on the farm, the family lived upstairs so they could be up early to bake cookies and buns for the store, stuff ads in the big bundles of newspapers dropped outside every morning, and take care of customers at the Greyhound Bus Depot inside the store. (The bus made a round trip from Sister Bay to Manitowoc every day.)

The back door of the store was always unlocked, and sometimes before Geri and Ann were up in the morning, customers would walk in and shout upstairs what they needed.

As the Schreibers had done, Geri and Ann extended credit to families having a hard time during the winter, and before there was a bank in Fish Creek, the market used to cash Social Security checks. Ann remembered that the store operated on a “pencil-and-paper basis” until credit cards became popular. Because there were no barcodes then, every item had to be hand-entered on the bill.

The two little Norz boys grew up in the store. Gerald was in school during most of the year, but Charles went to work with his parents every day. Ann recalls that he was shy and hid behind soap boxes when customers came in.

Boaters used the store’s grocery carts to haul their purchases down to the docks, and Ann rounded them up each evening. When the store’s phone was out of order, the Catholic Retreat Center on Chambers Island called the Fish Creek police to place its order, then arrived by boat to pick it up. Ann remembered that the orders always included a lot of candles because power on the island went out frequently.

The lasting mark of Geri and Ann was the Norzwich. About 1975, when many young people began arriving in the area for summer employment, most of them had no refrigeration available in their rented rooms. With limited funds, many bought bread, meat and cheese at the store and asked to leave it in the refrigerator. When the number of packages with little name labels threatened to exceed the capacity of the fridge, Geri set up a long table in the back of the store with Ann’s homemade buns and a variety of meats, cheeses and condiments.

The Norzwich was soon famous among locals. Summer people and tourists bought them, too, but they just called them really good sandwiches.

Geri had his own ideas about what belonged together on a bun. For example, people who asked for turkey and cheddar got turkey and Swiss instead. If he felt a customer was short of money or needed fattening up, he stacked on extra ingredients. Children who wanted just peanut butter and jelly paid the same price as adults – less than $2 in the beginning – and it all evened out eventually. Later, fruit or chips and one of Ann’s chocolate-chip cookies were added, and the price went up a little.

In 2000, the Norzes sold the market to Mitch Larson, who spent a year researching a renovation that would preserve the building’s 105-year-old history.

In 2002, the Larsons sold the business (but not the building) to Mitch’s cousin, Jeanne Hyde; and her husband, Mike, who continued the grocery business and the Norzwich, as did

Bryan Seiberlich when he took over in 2014. New owners Cristina and Stephen Jones are keeping the tradition alive after taking over in 2020.