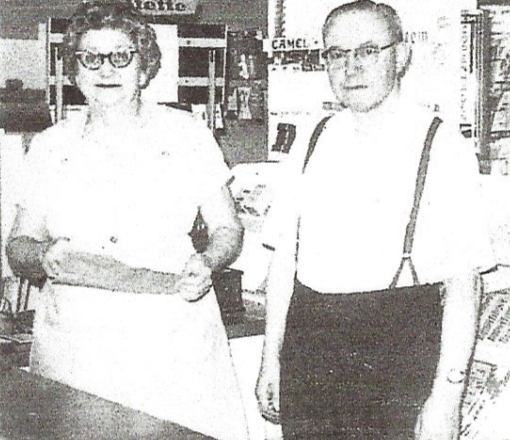 Viney and Joe Fontaine in the store in the 1950s. Submitted.

William Struck built his store and cheese factory in 1916 near the big curve on Highway 57 just south of Namur (then known as Fairland). The building, the big curve and Namur are still there, but the store closed more than 50 years ago and Highway 57 now bypasses Namur on the east.

To learn about the history of Fontaine’s Store, Priscilla Fontaine Delorit  referred me to conversations that she and her mother, Viney Fontaine, had with Paul and Frances Burton for a chapter in their book, Door County Stories: And Stories from the Belgian Settlement, published in 2003. (Much of the material here is taken from that source, with Paul’s permission.)

After running the store for a few years, Struck sold it to the parents of Joseph (Joe) Fontaine, who, during the Depression, sold it to their son Joe. He and his wife, Alvina “Viney,” made the store their life’s work. They lived upstairs with their two children: Gary, who preferred to work outdoors, and Priscilla, described by her mother as a “born storekeeper who worked in the family business from the time she was a youngster.”

A hired cheesemaker ran the cooperative factory on one side of the building while the Fontaines sold groceries, hardware and dry goods – just about anything you could name – on the other side and sold hand-cranked gasoline from the pump out front.

Gaslights lit the store, and a pot-bellied coal stove – with chairs and a spittoon nearby – heated it. Bags of flour, sugar and salt sat near the middle of the store during the early days, replaced later by TV sets and refrigerators. Two barrels of vinegar sat toward the back, and a tempting candy case was near the front door. A stalk of bananas hung from the ceiling, and wooden bins held three kinds of coffee beans. Paint, plowshares, windowpanes, barrels of motor oil and turpentine, and the steam boiler for the cheese factory filled the basement. Spools of barbed wire, salt blocks and empty egg crates occupied the wide front porch. (Farmers arrived with a full crate of 30 dozen eggs, exchanged the eggs for store credit and took home an empty crate.)

The cash drawer, considered high tech in its day, had a number of wires that ran along the bottom with rings at the end. If the wires were pulled in the right sequence, the drawer opened. If the correct sequence did not occur, a bell alerted Joe to get to the front of the store.

Because the Fontaines lived in the heart of the largest Belgian community in the world outside Belgium, most of their business was conducted in Walloon, a language that originated in Belgium’s Wallonia region. Priscilla recalled that she spoke very little English when she started school.

Times were hard when Joe and Viney took over the store.

“We took eggs in trade at nine cents a dozen and sold them for a little less just to keep the business,” Viney said. “We had to scrape to set aside a little bit of money each week to go toward paying taxes at the end of the year.”

The store opened at 5 am, when farmers delivered their milk to the cheese factory, and closing time was about 9 pm. Occasionally, customers were difficult. One woman bought a lot from Viney, but she bought very little if Joe or Priscilla waited on her. Men consulted Joe when they shopped for hardware.

Joe and Viney closed the store and retired in 1969, and the building has long been a private residence.