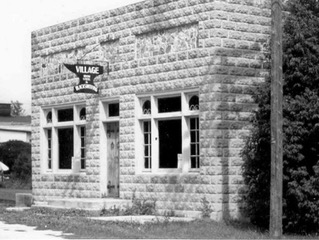 In 1901, H.F. and Emma Eames sold property to Fred and Annie Hanson that’s now the Plum Bottom Gallery’s downtown location. The following year, the Hansons built a house and store on the site.

Jim Wilson began his career as a storekeeper during the late 1800s, working as a clerk for Fred Hanson and then as manager of Truman Thorp’s general store. It was part of the home built in 1875 by Truman Thorp’s father, Levi Thorp – one of Egg Harbor’s founders – on a land grant signed by President James Buchanan in 1859. It’s now the site of Parador restaurant.

Wilson built his own store in 1910 at the intersection of Highway 42 and County G, and he and his wife, the former Rose Manney, operated it. Wilson was known for making special ice cream sundaes for youngsters and packing a bag of candy in the groceries of families with children.

After Wilson’s death in 1933, Milton Wulf purchased the store from Rose Wilson. Wulf and his wife took out the ice cream parlor and opened a Gambles store that sold a variety of merchandise, including linens. The Wulfs had the store into the 1950s, when Milton was killed in a car accident.

His wife sold the business to Ida Haberli and her daughter, Vi, who also had a hair salon in the building. Later owners included Meyer, Columb, Oscar Kohlmann, Lee Adams, Helen Olson, Brown, Smits, Cheryl Crowe and Fitzgerald. Other businesses in the building included a meat market, a beauty salon operated by Eldon Robertoy, a restaurant, gift shops and a bakery.

The village purchased the Wilson property in 1977 and demolished it to create the first phase of Harbor View Park.

In 1934, Worachek’s Meats and Sausage Company opened in the building that now houses Blacksmith Clothing Co. A smokehouse is still attached to the back, and ice harvested from the harbor was used for refrigeration. It was the first building in the village to be constructed of concrete blocks, with decorative “hard head” stones on the front. Later, the building was used as a blacksmith shop and hardware store.

During the 1940s and ’50s, Loyal Cornell and his wife, a daughter of the Woracheks, opened a butcher shop and grocery store in the building and rented meat lockers because not many families had home freezers.