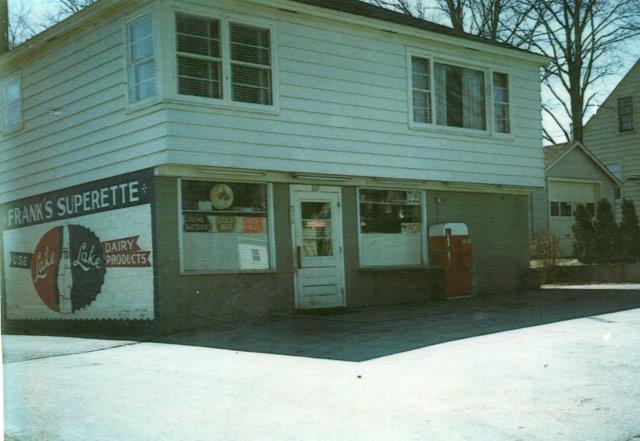 A potato, a pig and the theme Together Forever graced the T-shirts for the 2015 Sausage Daze event. (From left) Brothers Tom and Todd Hobart were on duty with the 1800s sausage stuffer that their dad used in Frank’s Superette. Submitted.

Frank and Sarah Hobart bought Sig Anderson’s grocery store on Maple Street near Corpus Christi School (now St. John Bosco) in Sturgeon Bay in 1961, when Barb and Jim, their two older children, were in high school. Frank had previously worked as the head butcher at Trodahl’s Grocery Store at Madison and Maple. Treiva Wiltering recalled visiting Sig, her father’s cousin, in his family’s apartment above the store.

Dave Pankratz, whose grandfather and uncles had the Squiers’ grocery stores in Sturgeon Bay, grew up just a block and a half from Sig Anderson’s store before it was sold to Hobart.

“I’ll never forget how many times my mom gave me 26 cents and said, ‘Run to Sig’s and get a loaf of bread,’” Pankratz said.

“Jim and I had been familiar with Anderson’s store long before my parents bought it,” Barb Hobart Rimert said. “When we were just little tykes, we used to walk there to buy penny candy, especially those play cigarettes that came two in a package. We’d ‘smoke’ them all the way home to our house on Duluth. Our family moved to the spacious apartment above the store, with three bedrooms and large living and dining rooms. Our former home was sold and moved to Walnut Street. Where it stood is now the site of Corpus Christi Church, but the garage my dad built is still there.”

Barb was 16 when her youngest brother, Todd, was born. “I was in high school and busy with a lot of activities,” she recalled, “but I hurried home most days to take care of Todd and give my mom a break so she could give my dad a break in the store. Some days I’d take Todd for a drive, and we’d often stop to visit Grandma Delwiche on the east side. Of course, I worked in the store, too, and it was a lot of fun.”

“The store afforded me a great part-time job through high school and college,” Jim said. “While the store carried a full range of groceries, Frank’s Superette was best known for its fresh meat and homemade sausages.” Tom, the middle of the three Hobart boys, recalled that he regularly carried packages of meat to customers’ cars and found bags of groceries from Red Owl or Piggly Wiggly already in the cars. “No matter where else they shopped, people came to Frank’s for meat,” Tom said.

“Back then, home delivery was common,” Jim said. “After I got my driver’s license, I became the designated delivery boy, bringing either a few items or large orders. There was never a charge for delivery, and I do not recall ever being tipped. It was just fun to be out and about the neighborhood instead of stocking shelves. Talking to customers and salesmen was really the best part of having and working in a small, neighborhood grocery store. Most people who entered the store were folks we knew and had some connection with.”

Tom remembers that a lot of people bought just one or two eggs at a time for a nickel apiece. “There were no cartons,” he said. “We’d just put them loose in a little paper bag. I recall a few complaints that I was too rough with them.

“At dinnertime, Mom would call me to come upstairs first. She’d throw a plate in front of me and say, ‘Now hurry up and eat so Dad can come up and have his dinner.’ So I’d gobble my food and run downstairs. It’s a habit I’ve never been able to overcome. No matter if I’m eating with my wife or company or in a restaurant, I’m always the first one through.” (Barb also recalled hurrying through the early dinner shift.)

“Dad always had charge accounts,” Tom said. “People sometimes just picked up things and walked out the door, saying, ‘Put it on our account.’ We had to hurry and write down what they had. My dad would open anytime for someone who called after hours and said they needed something – even on Christmas, if a woman realized she had forgotten an item for Christmas dinner.”

Tom said that most people who mention the store these days remember walking over from Corpus Christi School to see all the penny candy behind the counter – and trying to find a nickel to buy some. “We also had bulk candy at Christmas time – big boxes of caramels and chocolate-covered coconut we called angel candy that we scooped up and sold by the pound.”

“By that time,” Barb said, “it was hard to find grocery suppliers that would come to stock the business. Finally, there were so few small stores that the suppliers were no longer interested. My folks continued to live upstairs for a few years and turned the first floor into a rec room with pool tables, a TV and a big bar. That’s where we had all our family dinners.”

Several years later, Frank and Sarah bought a home on Geneva Street, and the building was sold. It’s now a duplex. Sarah died in 2009 at age 90, and Frank died a year later at age 95. “They led a very long and wonderful life,” Barb said.

All those years in the store created a family connection that has continued through the generations. Grandson Brad Hobart, who recently moved to Sturgeon Bay to work as a pharmacist at Door County Medical Center, emailed, “Frank’s famous recipe for potato sausage is put to use every fall here in Door County at a family reunion called Sausage Daze.

“My aunts and uncles put on the event, and Hobarts come from far and wide to ‘turn the crank for Frank.’ Yes, we still use Frank’s original crank sausage stuffer that was cast in the 1800s. The event has been a good opportunity to see relatives and celebrate the life of my grandparents.”

There’s a new theme every year, and Jim creates T-shirts for everyone. Barb said attendance is usually about 25, representing four generations of Hobarts.