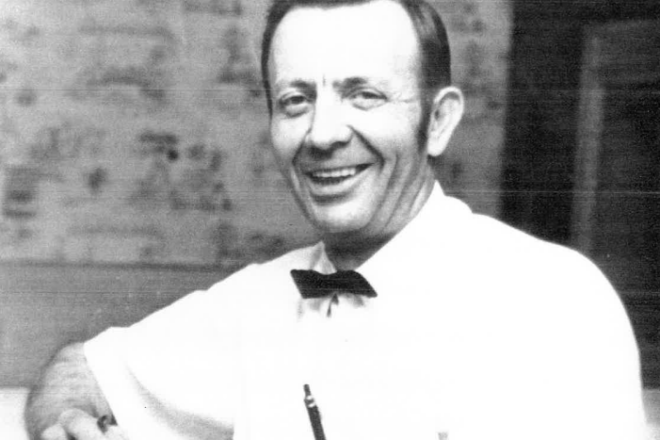 After weeks of scrubbing, painting and stocking shelves, Herman and Keta Steebs opened Happy Herman’s Market the week before Christmas in 1956. John Kopitzke ran a half-page ad in the Door Reminder and, as Keta said, “inadvertently became our first customer by buying a nickel candy bar.”

Keta’s brother-in-law, Wesley Landstrom, made a huge, plywood Santa Claus sleigh cutout for the store’s roof, and it won second prize in the Lions Club competition. Keta’s sister, Delores Landstrom, helped out in the store.

The following description of the early days of Happy Herman’s was written by Keta for a local newspaper. Her son, Scott, and daughter-in-law, Kathy, provided the copy.

Opening night saw our first employee, Harriet ‘Sis’ Seaquist manning the checkout, yours truly helping Herman at the meat counter and gobs of customers jamming our aisles. The event was an unqualified success.

Our suppliers, the Plumb & Nelson Company of Manitowoc, Mrs. Karl’s Bakery, Pleck Dairy, Dick Brothers Bakery, Fairmont Ice Cream and two Green Bay produce companies all chipped in with prizes, adding a bit of a fillip to the occasion. Although our little store only had three aisles, we were able to carry some of everything. Space on the bread rack – limited as it was – was fought over daily by our competing bread men: Dale Seiler of Mrs. Karl’s and Gene Kasten of Dick Brothers.

Herman’s Market prided itself on its meat and, to justify that claim, Herman bought nothing but the best, using the oldest, least-popular cuts for our personal use. Equipped with a frying pan, slow cooker and Nesco roaster, Herman made such savory, good-smelling meals that our morning regulars – Wes Staver, Alma Bunda, Emma Pahl and Joe D’Louey – would copy his recipes and have the same meal themselves. One Ellison Bay couple – she thrifty, he not – drove in every other day to see what was cooking. While she shopped for the basics, he loaded his cart with gourmet foods and choice steaks.

Our meat first got a taste of the limelight when I decided to walk in the Fall Festival parade leading Ed Koessl’s cow – proclaiming “The Only Meat Fresher than Herman’s” – down Main Street. The cow showed her disapproval by stepping on my foot, laying me low for days. That same year, 1957, was the year our good friends Rita and Earl Willems opened their bowling alley, encouraging every business in the area to sponsor teams. Thanks to my bad foot, Herman’s Market was in the cellar all year.

But everything else was coming up roses. In 1962, in order to do needed remodeling, we bought – rather than continuing to rent – that homely little concrete building from owner Anna Peterson, who, with her niece, Eunice, had once used it as a tea room.

Before then – between the time Herman’s Market opened and Earl Willems bought a rotisserie to serve roast chicken to his growing number of bowlers – a major event took place. Ellsworth “Andy” Anderson, owner of Masterfreeze, a freezer-cooler operation, moved his factory directly across the street. Were we ever happy! Not only did business pick up, but Andy and Herman worked out a deal trading groceries for a new walk-in freezer-cooler, which, to my knowledge, may still be there.

Life was full and rich in those still-young years but, by 1968, the handwriting was on the wall. Blessed by then with two young sons but burdened with an unprofitable business (chains could sell cheaper than we could buy), we got out while the going was good.

Painful as the process was, it was inevitable. The mid-sixties, we belatedly learned, was not a propitious time for shoestring operations. Nor for stores prone to extending credit to customers who shopped elsewhere when they had money. But then, I never was good in arithmetic. The store was leased to George Brunns, and the Steebs’ farm home was rented.

What Keta had been good in since high school, however – when she penned essays for college students – was writing, and she soon had a job on the Women’s Desk of the Green Bay Press Gazette. She loved it, but Herman and their two little boys, Scott and Patrick, missed Sister Bay. “I came home every night to three long faces,” Keta wrote.

“Just as I was about to resort to a heavier dose of Valium, the miracle occurred, the clouds disappeared, the sun came from behind the clouds. Herman’s Market had a new owner, and that owner wanted Herman to run his old store. A Sturgeon Bay newspaper could use my services, and our home, thanks to an understanding renter, became available.”

Although the Steebs boys weren’t very old when Herman and Keta ran Happy Herman’s Market, Scott has one vivid memory.

“Little bags of Frito corn chips had a prize inside – a little eraser in the shape of the Frito Bandito. I took one to school, and all the other first- or second-graders were really impressed. I thought if I took enough erasers for everyone, I’d be really popular. So, I opened every bag in the store to get the erasers. My parents were not happy!”

The building that once housed Happy Herman’s Market is now Grasse’s Grill.