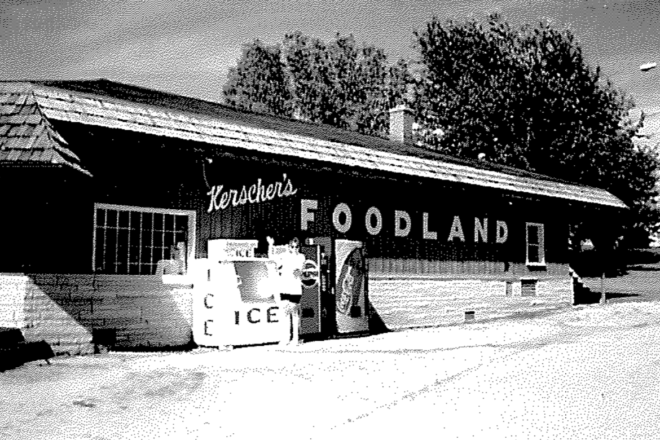 Jim Kerscher shared this photo of the Valmy store, established in 1958.

“There was a store on almost every corner,” Jim Kerscher said, “but every family was loyal to just one.” Friday nights were the busiest. People got their paychecks that day and went in to stock up for the week.

From 1941 to 1958, Lawrence and Loretta Kerscher operated Kerscher’s Market at 368 Jefferson St. in Sturgeon Bay, across from Pleck’s Ice Cream and Dairy. Their son, Jim, worked there while he was growing up, stocking shelves and lending a helping hand to Fritz Pfeifer, the head butcher, who owned the building and lived behind the store. Pfeifer taught Jim how to cut meat, which was invaluable – Jim recalled butchering lots of chickens and turkeys at Thanksgiving.

Jim also remembered that milk was five cents a pint, and although the store carried Del Monte, among other major brands, there was much less variety than there is today. “If you wanted a can of peas,” Jim said, “there was one choice.”

“We got a lot of Jamaicans and Hispanics who picked cherries and apples,” Jim said. “They came in the evening after the store had closed, but we opened up just for them. I remember that the Hispanics came in their own cars, but the Jamaicans all came in a bus from the orchards.”

Lawrence Kerscher closed the doors of the Jefferson Street store for the final time in 1958 – the building now houses Peninsula Creations – but that was not the end of Kerscher’s.

In April of that year, Jim married Carol Stoeger, and he and his dad opened Kerscher’s Foodland at 4436 Whitefish Bay Road in Valmy. It was already larger than the Sturgeon Bay store, but after only a few years, it had doubled in size.

Jim and Lawrence continued to work together – Jim handled the groceries while Lawrence was in charge of the meat department – but a heart attack in 1960 caused Lawrence to stop working and sell his share of the business to Jim.

Forty years later, Jim and Carol retired. In order to keep the market in the family, their sons – Ron, Jim, Terry and Tom – formed a corporation to buy Kerscher’s Foodland from their parents. They remodeled it and hired a manager to operate it as a convenience store with gas pumps out front.

“Such a wonderful place,” she said, “with Mr. Kerscher making his own sausages, and later his son, Jim, carrying on the tradition. Mrs. Kerscher manned the checkout counter and knew every customer by name. As kids, we were allowed to drop in and pick up groceries, maybe some candy and a comic book, and just say, ‘Put it on our bill.’ This place was definitely the center of our summer community.”

Despite the fact that no Kerschers have been involved in the business for 16 years, the sign still says Kerscher’s. And multiple reviews swear that the brats are still the best in the county.