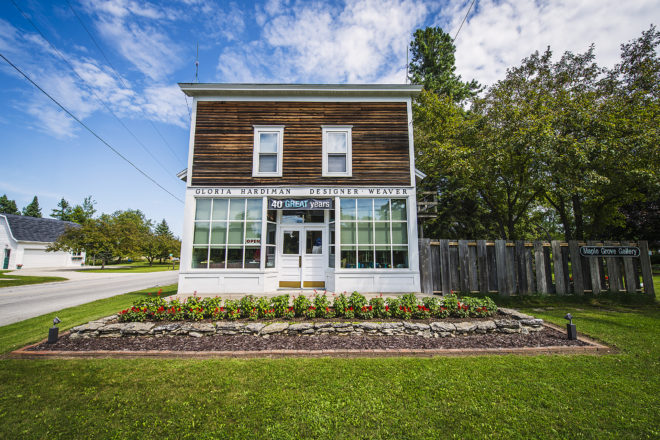 The old “BS Store” in 2013, during its days as the home of Gloria Hardiman’s Maple Grove Gallery. The building was home to a grocery store until 1968. Photo by Len Villano.

William and Wilhelmina Reinhard built Reinhard’s Store in 1916 on the southeast corner of Highway F and Maple Grove Road. They lived on the farm across the road, where Camp David – the home of today’s Fishstock concerts – is now located. Their grandchildren, Delores Prust Spittlemeister, Helen Prust Mueller and her twin brother, Herbert, were born at the store in the 1930s, when their parents, Herbert and Hildagard Reinhard Prust, ran it.

Helen remembered the store’s potbelly stove, a gas pump out front, and flour and sugar that came in barrels and were sold by the pound. Delores added that vinegar also came in a barrel with a pump. Local farmers provided the butter and eggs for sale, and eggs sold for eight cents per dozen. A truck came by regularly to deliver bread. Candy was moved to higher and higher shelves as the children got old enough to climb. During the winter, their father cut ice from the bay in Fish Creek and stored it in sawdust in a shed behind the store.

Times were hard. Delores remembered her parents saying that dairy farmers earned about eight dollars per month for the milk they sold, with a dollar going to the bill at their store, a dollar for cattle feed, and soon it was all gone. Victor Champeau, who lived up the road, owned the cheese factory next door, and teachers at Maple Grove School, across the road, boarded with the Prusts.

About 1940, Alfred and Margaret Franke bought the store, when their son, Allen “Toby” Franke, was five and his sister, Joanne, was three. The family lived in rooms behind the store and rented the upstairs to Smoky Bley, who worked in the cheese factory. Toby remembered “like yesterday” that his first-grade class was outside for recess when the cheese factory, which by then belonged to his parents, burned to the ground. Instead of rebuilding it, his dad tore out a wall of their living quarters to enlarge the store.

When Toby and Joanne were quarantined for six weeks with scarlet fever, their aunt, May Jarman, built a miniature snowman on the ledge outside the bedroom window to entertain them.

A few years later, John and Tessie Nippert bought the store and operated it for a number of years before selling it to William and Wilhelmina Reinhard’s son, Lawrence Reinhard, and his wife, Glenna.

By the time Gloria Hardiman and her husband bought the building from the Reinhards in 1968, locals called it the “BS Store” because older men in the neighborhood loved to sit around the stove and tell tall tales. (There was even a sign on a nearby corner pointing to the BS Store.) The Hardimans spent five years turning the building into Maple Grove Gallery, where Gloria Hardiman created lovely woven items for 44 years. before closing in 2017.