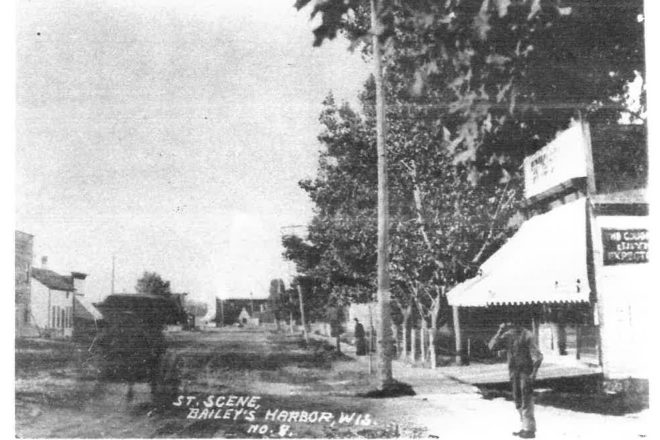 In 1914, Frank Blakefield bought a small building in Baileys Harbor and operated a grocery store there until 1939, when Bill Norton took over the business and ran it as an IGA. Fifteen years later, Anton and Lillian Olson bought it. Although it occupied a small space, it had a selection of meat and groceries.

From 1954 until 2018, it was an ice cream parlor, for many years known as the Yum Yum Tree. Recently, Britton Unkefer – owner of the Wild Tomato restaurants in Egg Harbor, Fish Creek and Sister Bay – has been hard at work remodeling the building and has reopened it as Clover & Ash Restaurant.

Leann Despotes, who grew up in Baileys Harbor, recalled that families pretty much had loyalty to either the Olsons’ store or the other, larger grocery store down the street, which Otto and Ella Voeks owned. They moved from Jacksonport around 1920 and built Voeks’ Red Owl.

The store was on the north side of the building, and the family lived in the quarters on the south. Later, they expanded the business to a third area on the north side. Like most little stores of the time, the Voekses carried many nongrocery items such as comic books, Despotes remembered buying blouses there.

The meat counter was at the back of the store. Otto made his own sausage, and there was always a large selection of sausage and big half-circles of longhorn cheese. Fresh vegetables were usually limited to potatoes, carrots and onions.

At Christmas time, there was a big box of popcorn balls – wrapped in different colors of cellophane – near the register, along with a large box of angel candy – airy, irregularly shaped, golden pieces dipped in chocolate.

Ben and Pearl Schraml bought the store from the Voekses in 1944. Susie Peil Bauldry started stocking shelves there when she was about 12. Because she loved to garden, she arranged the produce as it might have grown, with a bunch of radishes stuck in here and there. Someone told her she was doing it all wrong, but Ben came by and said, “Let her alone. That’s the best the produce display has ever looked.”

Bauldry also remembered that Ben, with his ever-present cigar, liked to slip away to visit with his good friend Nick Rehr, who owned a tavern where the Blue Ox is now. Or maybe the bar owned by another friend, Emil Herbst, where Chives is now. “None of us who worked in the store could cut meat,” Bauldry said. “Somebody would have to run and get Ben.”

The Voekses’ son Elton bought the store back during the mid-1950s and operated it at least through the 1960s as Voeks’ Super Food Market. Elton’s brother, Orville, had invented and patented a machine that made plastic staples, so Bauldry, by then grown up, was employed to produce them in the basement of the store. She recalled it being a dark place with lots of cats – and not as much fun as arranging produce.

Elton and Orville also built and ran the Lake Theater in a Quonset hut in Baileys Harbor when they returned from military service in 1947, and in 1950, they built the Skyway Outdoor Theater on Highway 42.

Later, Bob Zak and Tom Ziegler ran the grocery store as Bob and Tom’s before selling it in 1978 to John and Dennis Hickey, who called it Harbor Market. Carol and Lester Newman operated it as a Red Owl from 1983 to 1994, when Carol Moroney bought it. She owned the store for a short time before selling it to her realtor, who remodeled it into the Harbor Market Building, with three small, connected shops: currently What Next?, the Red Geranium and Knit Whit’s.