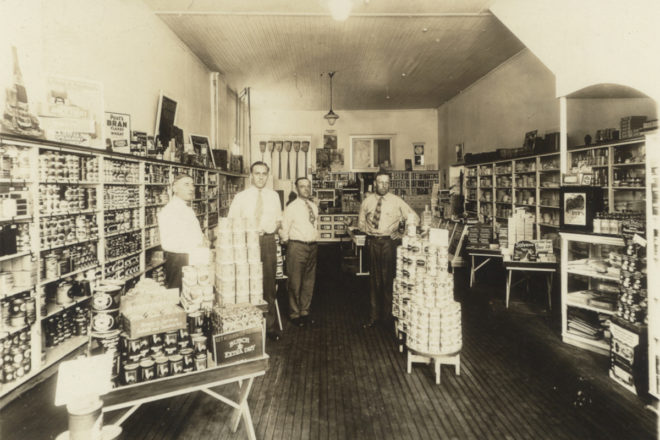 In 1916, Henry Goettelman and William Warner formed the Goettelman-Warner Company, selling groceries and dry goods from a building on South Madison that was later owned solely by Goettelman. When the Bank of Sawyer next door moved to the D.C. Pisha Building, the space it vacated was converted fully to a grocery store, with an opening between the two buildings.

On Dec. 18, 1925, a local newspaper reported that a “live tarantula was found in a bunch of bananas at the Goettelman-Warner grocery on Wednesday, and the big spider is on display in a glass jar.”

On Feb. 20, 1931, an item in the same newspaper announced that Leonard Schafer, formerly a clerk at the Goettelman-Warner Store “and an expert meat cutter,” will be in charge of the meat department at a new grocery and meat market located in the rear of the Sawyer Hardware Company, formerly used as a display room and tin shop.

The same issue of the paper reported that Lester Olson, employed in the Goettelman-Warner grocery department, was the owner of a new Chevrolet. (Chevy prices had been reduced by $20 to $35 that year and ranged from $475 for the two-passenger roadster – the lowest ever for a Chevrolet – to $545 for the coach model.)

Royal Goettelman formed a partnership with his father, Henry, in 1938 and assumed full ownership of the dry-goods business. In the meantime, the Goettelman-Warner partnership had been dissolved, and the building that had been the former bank at 49 S. Madison, where Zoerb’s is now located, was retained by the Warner family.

On April 22, 1938, Bill Warner announced that he was now the sole owner of the store, would continue giving the same courteous service to all and “would continue to buy anything in the produce line” – something not usually promised in other grocery ads.

Not a lot of people have memories of Warner’s. Bill Berglund remembered that his aunt, Emma Kimber, was a friend of the Warners and worked at the store part time. He also said that Daw Smelzer was a Warner’s butcher who did custom meat cutting.

Lynette Harris said, “The grocery store our family shopped at was Warner’s. It was quite small, yet held everything we needed, it seemed.”

She recalled that her grandmother, Beatrice Moore, sold eggs to Warner’s.

“Dad carried them there in a metal box with a lid and handle, layers of eggs nestled inside,” Harris said.

Tom Savage had an especially nice memory of Warner’s when it was managed by Dale Blaiser.

“They were good people,” Savage said. “They provided a sort of welfare for me, letting me buy on credit when I was unemployed and waiting for a check to arrive.”