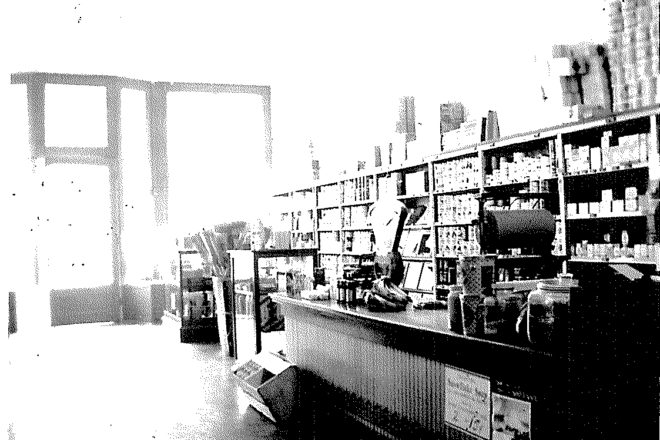 Inside the Worley store. Photo Courtesy of Cheryl Worley Meingast.

When Sarah DeBaker Worley’s husband, George Worley Sr., abandoned her and their four children during the early years of the 20th century, it was hard for a divorced, Catholic woman to find work. She received relief from Sturgeon Bay and Door County for a while before finding a job as a school custodian to support her family.

She worked hard, as did her children, William, George, Joseph and Ida. By December 1921, Sarah had saved enough to purchase a building at 1922 Spruce Street (now Michigan Street), in back of the Merchants Exchange Bank and next door to the library (now the site of Door County Vacuums). Joseph Worley & Co. opened for business a month later.

The store advertised groceries, candies, cigars, church goods and school supplies. A newspaper article dated Feb. 1, 1922, noted that “the firm consists of Miss Ida Worley and her brother Joseph. Both are well-known and popular young people and there is no reason why they should not get their share of the public patronage.”

A few days later, an open-for-business ad stated, “We will be pleased to have the privilege of showing the public that it will be to their advantage to trade with us.” The following month, the store’s ad read, “Our Prices are Right and Quality of the VERY BEST.” It reminded customers that delivery was available and listed the phone number: 120.

By March 1, Sarah had moved her family into the lower level of the Nic Moeller house on Sherman Street. Two months later, carpenters – under the supervision of Ben Defaut – were busy adding a second story to the Worley Store, to be used as living quarters.

Ida had been a partner and the bookkeeper for the grocery store since it had opened, but because Joseph’s wife, Wilma, had also worked in the business world, she took over book work at the store, leaving Ida to find other employment.

After Ida’s share of the business was bought out, she attended business college in Green Bay, worked for companies in Sturgeon Bay and Green Bay, and did not marry. Cheryl Worley Meingast remembers her great aunt as a very sweet woman who enjoyed visits from her great nieces and great nephews and loved to bake for them at Christmas.

In 1937, Joseph moved the store into the north half of a building he’d purchased at 20 N. 3rd Ave. Sarah leased the building that the grocery store had previously occupied to W.J. Grall.

The school and office-supply portion of the original grocery store was discontinued in 1975, freeing more space for books, especially juvenile publications. By then, the wholesale division, Peninsula Periodical Distributors, served all of Door County north of Sturgeon Bay. Since 1992, the building has housed the Door County Confectionery.

Cheryl has fond memories of her grandparents’ store and visiting Grandma Wilma in her office on the second floor.

“She’d have the large account book open,” Cheryl recalled, “and her wrists wrapped for what must have been very painful carpal tunnel syndrome. She would stop whatever she was doing, never once asking me to wait just a minute before opening her arms for a hug and kiss.

“Grandpa Joe, always known to our family as Grandpa Fuzzy – as in Fuzzy Wuzzy the bear, who had no hair – was always hard at work in the store from very early morning, sorting and stacking newspapers for the paperboys to pick up, and then making his own deliveries.”

Cheryl also recalled spending the night with her grandparents when she was a very small child.

“Before bed, they would ask if I would like ice cream or pop or both to make a root beer float. Grandma would send Grandpa downstairs to the store to get those items, or popcorn or malted milk balls to give their dog after he did tricks.”