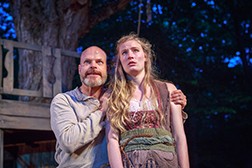 Mark Corkins as Prospero and Grayson Heyl as Miranda.

The rough magic that occurs in the Björklunden garden during this summer’s performance of Door Shakespeare’s The Tempest conjures up what might well be one of the best shows in the history of the company.

Prospero, aptly performed by Mark Corkins (a longtime member of the Milwaukee Rep resident acting company), serves as a sort of ringmaster as he manipulates the fates of those who have wronged him bringing about not only justice, but also romance for his daughter Miranda and humor for the audience.

In the backstory, this Duke of Milan had been betrayed and deposed, and through treachery marooned on an island with his small daughter Miranda. But because he has his books and the services of resident spirits, his life has not been bad; however, after several years have passed, he seizes the moment for revenge when a ship carrying the instigators of the coup d’etat sails near the island. Through the use of a magic administered by his servant, the airy spirit Ariel, a storm is conjured up to wash the villains ashore. And with a stylized shipwreck on stage, the action of the play begins.

A number of factors contribute to the success of this production, perhaps most important the choice of the play. The story of The Tempest takes place outdoors on an island; the garden setting of the production easily suggests that location. Also, the natural space is enhanced through the addition of a permanent set piece this season that includes an elevated platform and two sets of steps that add performance levels to what had previously been a flat space. 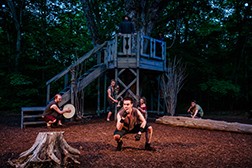 Steven Lee Johnson as The Tempest.

The cast is uniformly strong. Along with the fine performance by Corkins, Steven Lee Johnson’s acrobatic portrayal of Ariel is as magical as the conjurations that Prospero directs him to perform. Jonathan Wainwright’s Caliban, the deformed monster, is equally spellbinding. The earth-bound Caliban, the antithesis of Ariel, scrambles simian-like, his body knotted with energy.

Grayson Heyl (Miranda) and Andrew Carlyle (Ferdinand, the prince) shine as Shakespeare’s lovers. The couple grins and flirts with the verisimilitude of universal young love, and the audience smiles in return.

The tone of the show is light throughout, appropriate for an audience on folding chairs sitting under a cool night sky. In this production, time passes quickly because of the level of energy of the actors, the imaginative movement patterns, and the engaging live performance of incidental music. When Prospero says, “We are such stuff as dreams are made on,” his words ring true.

But the humor also has depth. “Oh brave new world that has such people in it!” Miranda exclaims when for the first time she sees the unsavory visitors to the island; the irony is not lost on the audience.

This playgoer always brings with him a bit of ambivalence regarding modern dress Shakespeare productions, contemporary costumes seeming at odds with archaic language, even though philosophically we all champion the universality of the bard’s themes. But in this show, the costuming works, formal wear for the visiting castaways and grunge for the island residents. 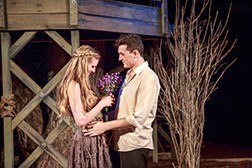 Grayson Heyl as Miranda and Andrew Carlyle as Ferdinand.

For theatergoers who have been reluctant to attend a Door Shakespeare production because of the challenge presented by classic theater in an outdoor setting, this might be the show to attend. The plot is easily followed, the script abridged to a comfortable length. And the restored formal garden near the playing space provides a pleasant stroll during intermission.