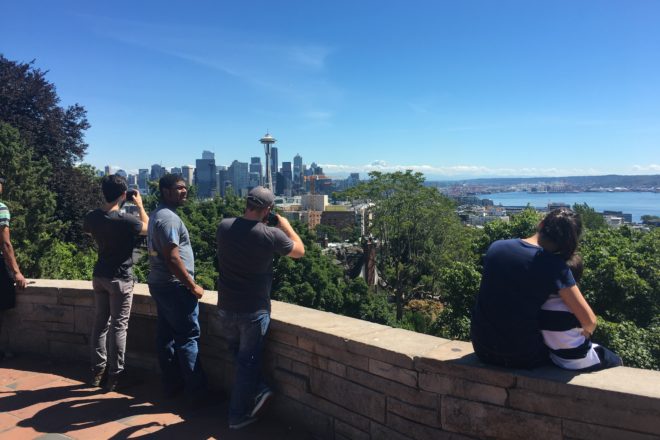 Late July isn’t usually the time to take a vacation if you work in Door County. There’s an uneasy feeling that comes along with requesting time off, finding people to cover your shifts, responding to your overtired co-workers with, “I’m gonna go have fun now. See you next week!” as you drive in the same direction of vacationers going back to the “real world.”

Not to mention this is the time to make most of your money for the year, taking off work to go spend money makes little sense.

All of this was in mind when I agreed to meet my high school friends, none of whom work seasonal jobs and all of whom have paid time off, in Seattle for a long weekend to celebrate one of us moving there for a fancy tech job.

A lot is going on in Seattle these days. The army of people working for Amazon creates its own traffic jams before and after work. The city government is passing legislation that would make a Texas rancher or a Chicago businessman squeal, just as the cost of living would make a Midwestern food service worker queasy.

I knew a little about Seattle before my plane arrived last week. I knew the tech boom Seattle was experiencing was changing everything. I knew all of coastal Washington and Oregon were threatened by a massive earthquake expected to occur off the coast which would send a tsunami to wash this place away.

I knew the hip-hop duo Run the Jewels was performing that weekend at the Capitol Hill Block Party, and that me and my seven friends all had tickets.

I knew that the Seattle city council had voted unanimously two weeks ago to implement an income tax on the city’s rich, complementing a $15 minimum wage, and that the day after I planned to leave Seattle a law would go into effect making holding a cellphone while driving a fineable offense. Suffice it to say Baileys Harbor will likely not be pushing these kinds of reforms any time soon.

Flying west toward Seattle is a thrill for any Midwestern kid sick of flat ground. The Rockies, peeking out among the clouds, give way to the Cascade range and Puget Sound. Mt. Rainier, marked as one of the most dangerous volcanoes in the nation, presides over the Seattle metropolitan area with a terrible quietude.

All these characteristics are hard to miss, not the least of which being the tech boom. The presence of some of the largest names in the tech world – Apple, Amazon, Microsoft, Google, Facebook – has brought enormous wealth to the city, which has fostered a food scene, arts festivals, and out-of-this-world infrastructure projects, including a tunnel for which they had the world’s largest tunnel boring machine of its kind built. Bertha, named after Seattle’s first and only female mayor Bertha Knight Landes, has a drilling diameter of 57.5 feet, is 326 feet long, and weighs more than 6,000 tons.

Any city on the west coast will have a little Asian influence. Sushi, ramen, dim sum, and even poké – a Hawaiian dish featuring raw marinated fish – are widely-served in Seattle, without taking away from the amazing Mexican, Caribbean and Turkish restaurants also putting out great food.

Seattle is no utopia. The other side of this prosperity is the damage it has wrought to the lower classes of Seattle. The tech boom has created enormous wealth for those at the top of the ladder, while the city’s middle class has shrunk. King County, where Seattle is located, has one of the country’s fastest-growing homeless populations and is now home to nearly 12,000 homeless people.

And it is in plain view. Know where to look and you will come upon tent villages that look like post-apocalyptic shantytowns.

Of course, homelessness is a ubiquitous aspect of urban centers, and the worst of it is found outside of our country. But it is experiencing this adversity alongside wealth, watching a Tesla drive past people who struggle to eat, which is so provoking.

Homelessness is different everywhere it’s present. The causes are just as unique as the solutions are complex.

Just as unique is how the people of a city respond to their homeless. A friend of mine in Chicago who gives freely to the poor references the Pope as his inspiration:  Who am I to judge? he said. Look right into the eyes of those who beg for charity and give. If there are 20 dollar bills in your pocket, what’s the problem?

And so, as I spent time away from Door County in the busiest season, the textural differences between the place we all know and love and this place I went to relax and enjoy the company of friends stand out clear as day. The human aspect present in urban areas crowds out the natural world, which for us in Door County is so ubiquitous. We have small talk about the weather and the seasons and what is growing; they have small talk about the people and their issues and accomplishments.

And in rush hour, as in every other city, the secret to how it all comes about is shown: Every one of these cars contains a busy person, all hurrying somewhere, each of them navigating roads carved out of hillsides nestled between mountains and ocean, a cloister of human activity in a fierce, beautiful world.