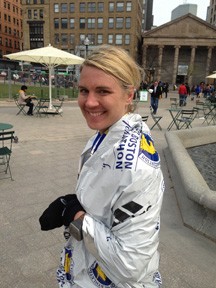 April 15, 2013. The average person may not be able to place what occurred on this date initially, other than noting it was the date federal and state taxes were due. However, we recently passed the one-year anniversary of a date that changed hundreds of lives in a very severe and abrupt way.

It was the date of the Boston Marathon bombings. The tragedy that gripped our nation for several days and weeks shook not only the running world, but the entire country with the events and manhunt that unfolded in the Boston area.

I was in Boston on April 15, 2013. I ran the Boston Marathon and had finished the race that day. While I wasn’t on the course or in the finish line area when the bombings occurred, I can tell you there isn’t a week that has gone by since then that I don’t think about that day. In the hours after the horror of what happened on Boylston Street sunk in, we were witness to things you just don’t see in America – multiple Department of Homeland Security vehicles zooming through the streets, as well as Massachusetts State Troopers and Boston Police Department presence on just about every corner and at every “T” station yielding visible weapons.

Back Bay area hotels went on lock down – no one let in, no one let out. Everyone was in disbelief and shock, and gripped by the ongoing media coverage via their smart phones and televisions with the repeated question “who could have done this?”

The scene was just absolutely surreal to me because less than a few hours before, I was on that very street, in a very different atmosphere. There had been jubilation and excitement on Boylston Street with thousands of spectators cheering for loved ones and strangers alike. That is the essence of the Boston Marathon. People from different backgrounds and cultures come out on this day to celebrate the triumph of running 26.2 miles. Even if they have never identified with being a runner, they come out to lend encouragement to strangers who have trained many long months with the goal to run from Hopkinton to Boston on Patriot’s Day.

If you’ve never experienced this special day in Boston, let me give you a little background. Patriot’s Day is a civic holiday commemorating the anniversary of the Battles of Lexington and Concord on April 19, 1775. There are observances and re-enactments of these first battles of the American Revolution in Lexington, Mass., and The Old North Bridge in Concord, Mass.

In the morning, mounted re-enactors with state police escorts retrace the rides of Paul Revere and William Dawes, calling out warnings the whole way. Patriot’s Day also begins a weeklong vacation week for Massachusetts’ public schools, as well being a school holiday for many local colleges and universities. The Boston Red Sox have been scheduled to play at home at Fenway Park every Patriot’s Day since 1959. It is also known as “Marathon Monday” in the greater Boston area. It doesn’t matter if a person has ever run a mile in their own life. The Boston Marathon brings people out to gather and celebrate a sporting event, history and life on what is often a day off of work or school on a spring day in New England.

Over the course of the years that I’ve run this race, I’ve always been struck by the varying groups of people that line the course. Old, young, rich, poor, students, tourists, children, firemen, military members, families and many different charity groups. Some are runners coming out to support other runners, but most do not identify with the strange ritual of 26.2 miles. Yet they wholeheartedly respect the event and spectacle before them.

From the start in sleepy Hopkinton, runners make their way through Ashland, Framingham, Natick, Wellesley, Newton and Brookline before entering the city of Boston. There’s a biker bar at about mile one where many leather-clad enthusiasts welcome us and toast us with Bloody Marys as we run by. One of the highlights of the course is running past the Wellesley College campus, where all runners are treated to what’s known as the “Scream Tunnel,” where hundreds of screaming, cheering Wellesley students line the course with homemade signs to coax runners to “Kiss me – I’m a science major” or “Kiss me – I’m not picky” or a clever favorite from last year, “Hey, I just met you and this is crazy…but it’s tradition, so kiss me maybe?”

The scene might sound a little odd, but once a runner encounters this stretch of the course, you find yourself picking up the pace and feeling pretty entertained, buoyed by the enormous outpouring of crowd support. Who knew running 26 miles could seem like an outright party at times? The atmosphere can be electric here, as well as near mile 21 and Boston College, where you can smell barbeques and witness lawn parties in the front yards of many homes along the course with happy co-eds and families laughing and enjoying the day’s merriment, especially if it’s a mild spring day. 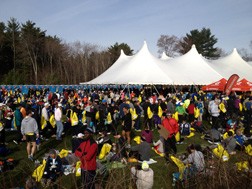 The reason for the celebration may vary for a lot of them, but what matters is that people come together on this third Monday in April in hope and support with civic and community pride. What cuts deep about the events of April 15, 2013, is that this day, Marathon Monday, is a healing, celebratory ritual. We may be “crazy runners” but people come out to support us in our journey to run 26.2 miles from Hopkinton to Boston, and we, as runners, get the distinct pleasure of experiencing their happiness and revelry as we run by them. The spectators and the small town communities we run through make this race the beloved event that it is.

The Boston course is notoriously difficult and hilly. The famed “Heartbreak Hill” between mile 20 and 21 comes at a point when most runners are tired beyond belief. It’s a struggle especially so late in the race, when so many runners hit what’s known as “the wall” with “dead” legs that are ready to give out and give up. The Boston Marathon spectators truly inspire us to keep going. Their signs, their smiles, their cheers of support are so integral to convince a runner to “dig deep” and find strength to continue on.

I can recall the 2012 race, when the temperature reached into the high 80s. It was beyond hot and without much shade on the course, my pace slowed. Someone handed out ice from their own cooler along the race route at mile 18. I took jellybeans and Twizzlers from young children offering such welcome treats at mile 21. By mile 23, a stranger handed me a Popsicle, which I fully credit for allowing me to keep my head up and continue on to the finish. Spectators were the ones who brought their own assistance and aid to us that made all the difference. On any other day, I would likely not accept food from a random person standing along the side of the road. But on Marathon day in Boston, this is a perfectly acceptable and normal thing. People help people.

I’ve witnessed some of the best examples of humanity being there for each other on this day, so it was no surprise that the Boston Marathon officials, runners and spectators jumped into action immediately to come to the aid of the wounded last year. The fact that the race itself became a target for violence is still beyond upsetting, it’s simply heartbreaking. Too many innocent people were hurt in a senseless act on a street that had been filled with enthusiasm moments earlier.

In the days, weeks and months since April 15, 2013, we still don’t fully understand and grasp a reason for the evil acts. Would any explanation or justification really suffice? The answer is a resounding no.

What I have come to determine in my thoughts and reflections on what happened last year is that it is important to restore the spirit of this great event. It’s important to overcome fear and hesitation and not abandon the marathon and community that has supported its growth for 118 years. I hold a lot of hope that while it will be difficult for us to return to the same location of the terror, it will be healing to gather, to mourn, to remember and ultimately celebrate what the Boston Marathon represents – our freedom.

I just received my official “Runner Passport” and “welcome” brochure for this year’s Boston Marathon, which will be my 10th Boston and marathon #31 for me. I believe it will be challenging, but it will also be special. On the very first page, one of the sponsors, John Hancock, has put forth a resonating message:

“We run as a reminder of the odds we have overcome. We run on behalf of those who can’t, or who never had the ability or opportunity. We run for ourselves, for the personal satisfaction it brings. We run for the world that shares our spirit and camaraderie.”

I think we also run for hope and in solidarity for a better world. We set goals and do our best to achieve them. Some of us will and some of us might fall a bit short. But if you don’t at least try, what’s the point? If you let fear and darkness take over, we aren’t left in a good position. Somewhere, I’ve seen this phrase – “Darkness cannot drive out darkness, only light can do that.” In Boston’s case, I think this means returning with heavy hearts but with resolve to bring “light” and positive energy back to the event. Running away from our fear doesn’t seem like the right answer here. There’s never been a day of the year when I feel more strongly that I’m in the right place than on Marathon Monday…and I don’t think that will be any different this year in Boston. I’m optimistic that the joyous spirit of this day will come forward amidst the remembrance and mourning we most certainly will encounter. It will be an emotional and bittersweet day for certain, but I’m eager to be present and participate. I want to be a part of this healing event and I want to run to help pull the community back together. And I’m hopeful the beloved spectators will feel the same way.