Silver carp jumping at the sound of a motor boat at the Illinois River Biological Station. Photo by Nerissa Michaels.

Attendees at the annual summer program of the Door County Environmental Council on Sept. 9 got an earful on the various threats facing the Great Lakes and our water supply.

Marc Smith, senior policy manager for the National Wildlife Federation, talked about the threat of an Asian carp invasion. Accompanying his talk with a video and photos of silver carp leaping from the Illinois River, Smith said there are sections of the Illinois where the five species of the invasive carp – bighead, black, common, grass and silver – are 90 percent of the fish mass, pushing out other species. 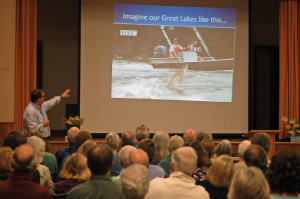 “They would love Sturgeon Bay, Green Bay, any of the shallow bays. That’s prime habitat for them,” he said.

As with many invasive species, Asian carp were introduced with a purpose in mind, but without thought of unintended consequences of their presence. Asian carp are ravenous filter feeders that were introduced in southern states in the 1960s and ’70s as a means of algae control in the aquaculture industry.

While Smith said no one denies that Asian carp pose a significant threat to the Great Lakes, he said a solution to prevent carp from entering Lake Michigan in Chicago is being held up by barge operators, who would be forced to change the way they operate. Smith said even though the barge business is small in the larger scheme of things – just one percent of Chicago commerce is moved by the shipping industry – everyone is willing to work with them to block watery throughways for Asian carp.

“They don’t want any change to the system,” Smith said of the barge operators. “How do we work through that? That’s where we are right now.”

George Meyer, who served as secretary of the Wisconsin Department of Natural Resources under Gov. Tommy Thompson and now is executive director of the Wisconsin Wildlife Federation, spoke next about a couple of major, ongoing threats to our water.

He started off with the Great Lakes Compact, which he described as a major accomplishment that brought eight states, two Canadian provinces and the U.S. Congress together in a plan to prevent future water diversions from the Great Lakes basin. 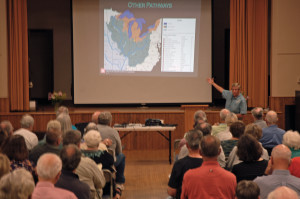 Meyer explained that the compact laid out strict guidelines for water diversion. The only way for a water diversion outside of areas that border the Great Lakes is if the Great Lakes basin line bisects a county, any community in that county can apply for a diversion permit. But Meyer said the standards were set very high, including that the community must be in need; it has to show there is no reasonable alternative to obtain water; it must show they have been through aggressive water conservation standards; and they must return treated water to Lake Michigan at much higher standards than inland water returns.

In October 2013, the City of Waukesha applied for a diversion from Lake Michigan that is currently under review by the DNR.

Meyer said Waukesha is a community in need because it has a radium problem in its groundwater, so it meets the first requirement for diversion. However, he said there is a reasonable and more economical alternative, and that is to treat the radium-contaminated water. He said the city has also requested way more water than they are currently using simply as a plan for expansion in the future. He added that the city has not met the standard of conservation practices and has not proven that the water returned to Lake Michigan will meet necessary standards. That water would be diverted from and returned to the City of Racine, Meyer said, because the much closer City of Milwaukee has already refused Waukesha.

“Why are we involved?” Meyer said. “We really believe in the Great Lakes Compact. If Waukesha met the standards, we would support them.”

A consortium of conservation groups hired two engineering firms to come up with a reasonable alternative for the city, which involves treating the radium in three of the city’s wells, at half the cost of the giant pipeline that would have to be constructed for the diversion and return.

“They have enough water using that system at half the price until at least 2050 or 2060, at which point there may be more alternatives,” Meyer said.

Meyer then moved on to “the one issue that keeps me up at night in terms of protection of the waters of the state of Wisconsin” – CAFOs, or concentrated animal feeding operations.

Meyer added that he has nothing against CAFOs if they are built in the right place and conducted with proper management practices. Kewaunee County, with its shallow soil on top of karst is the wrong place for them, yet Kewaunee County is ranked No. 1 in cow density in the state due to the high concentration of CAFOs (15).

“The waste generated from those 15 CAFOs – this is an amazing statistic – produces the waste equivalent of 924,822 humans. That’s the equivalent of Milwaukee, Madison and Green Bay put together, and this is on karst soil in Kewaunee County.”

Worse, he said, the Kewaunee County Soil and Water Conservation Dept. is predicting 45,000 more animals added to those CAFOs.

“Part of the problem, and this pains me,” Meyer said, “the DNR today is not meeting the challenge.”

Meyer said the DNR has to grow a spine and toughen CAFO regulations. He said he attended a recent board meeting that involved a discussion about better guidelines between the Dept. of Agriculture and the DNR. He was told the DNR is not in a position to put out tougher regulations. Instead, they will issue voluntary guidelines.

“That’s just truly irresponsible,” Meyer said. “We and others will be pushing that there be regulations. There should be a moratorium on any more expansions until they get this under control, but that’s not the way the world is working today in Madison, Wis.”

Meyer finished with a brief look at the dead zone in Green Bay created by runoff containing phosphorus, nitrogen and other chemicals.

“You end up with lower oxygen levels, which means fish and other aquatic life can’t survive. The area has expanded four times in the last 20 years,” he said.

The major culprit is the Fox River. “Every day the equivalent of 127 truckloads of sediment with nitrogen and phosphorus and other chemicals are introduced into the bay through the Fox River. That’s 10,000 truckloads a year,” Meyer said. “That’s why we have a dead zone.”

While he said much of that is from agricultural runoff, it includes urban runoff as well.

“We are regressing in terms of the dead zone in Green Bay,” he said.

Yet there is a solution for all of these problems.

“This is going to be solved by local citizens putting pressure on the legislature and the governor to direct the DNR to do what it used to do in terms of protecting the water of Wisconsin,” Meyer concluded.