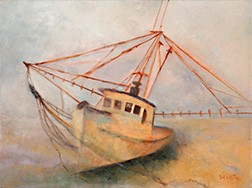 The Meadows Art Gallery within the walls of Scandia Village in Sister Bay will usher in the New Year with a look at three very different types of art – photography, painting and sculpture – in its January show, appropriately titled, “Three Directions.”

Featuring the eclectic photography of Jim Rossol, oil and pastel paintings by Karen DeNoto, and wood and metal sculptures by Bethany Kirwen, “Three Directions” will usher in perhaps the most exciting year so far for the Meadows Art Gallery, which opened in November 2012.

Its mission is simple: to promote the Door County art community by featuring only local beginning artists. It features visual art and three-dimensional art, and in 2015, will expand its boundaries even further. Tom Seagard, administrator for the nonprofit gallery, pointed to “Three Directions” as proof of the gallery’s intention to share not only varying forms of artwork, from sculptures to paintings, but the fine art it represents.

“Each artist has their own path that they’re following, but the end result brings about really fine art,” Seagard said of “Three Directions.”

On one end of the spectrum, photographer Jim Rossol bounces between representational art to abstract, created visions but is always highly selective of what he conveys.

“He gears in onto making a statement about the spatiality, if you will, of what he’s looking at and then he translates that into different ways of presenting the image and the statement in a manner that, the easiest way I can tell you is he’s representational, he’s abstracted, he’s anything in between those two,” Seagard said.

Karen DeNoto will present her work under the title “Color Language,” which perfectly describes her use of color to steer viewers toward understanding the subject’s story. 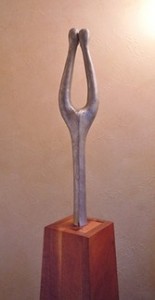 “She’ll bend or vary the color to push you in the direction she wants you to go based on the subject matter,” Seagard said.

The final artist of the show, Bethany Kirwen, will present a retrospective of her life as an artist and will dedicate the show to her mother, who recently passed away.

Kirwen will show three sculptures she created in college called “Come Together” along with a childhood drawing that exemplifies her mother’s influence on Kirwen’s artwork.

“This is more or less a retrospective of her work,” Seagard said. “… It’s going to be mom’s influence in the direction that she chose and some of the philosophy that mom gave her.”

Seagard hopes viewers take away not only an individual appreciation for the artists of “Three Directions,” but a common sense of honesty in the group as well.

This year the gallery will further expand on its mission by welcoming varying types of art, from decorative kites and poetry to photography and wreaths.

Following “Three Directions,” the gallery will set up for its next show, “Tres Amigos’ Experiences Young and Old” featuring work by Ernest Beutel, Samantha Vanderhoof and Tom Seagard from Jan. 25 – Feb. 14.

While many of the shows will be on display for three to four weeks, the spring poetry show will be extended to 11 weeks and will feature a collection of poets from three different groups: Word Women, the Wallace Poetry Group, and The Unabridged Poets.

This summer, the gallery has set a very tentative schedule due to the planned construction in Sister Bay. In fact, Seagard has affectionately called the summer show “Fearless Explorer,” in honor of the lengths to which visitors will have to go to get to the gallery. 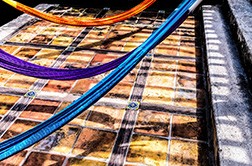 “It has everything to do with the people who will have to go through the barricades of the construction to get to the Meadows Art Gallery,” Seagard said.

An opening reception for “Three Directions” will be held Saturday, Jan. 3 from 2 – 4 pm at the gallery. The Meadows Art Gallery is located in Scandia Village, 10560 Applewood Road in Sister Bay. For information call 920.854.4416.