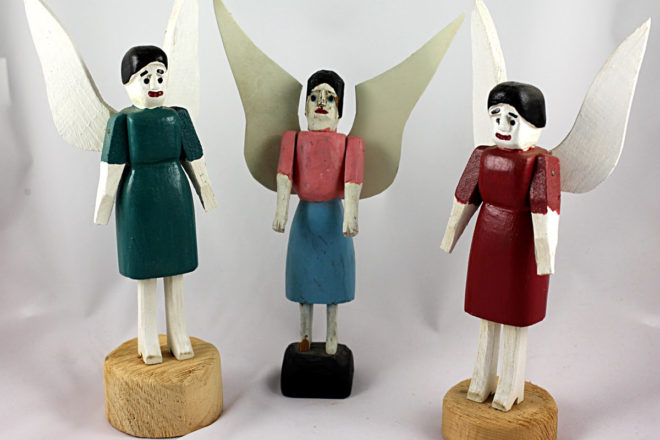 “Angels” by Albert and Randy Zahn. 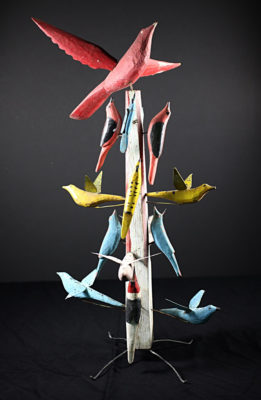 Ed Zahn (1923-2012), and great-grandson, Randy Zahn (b. 1953) are featured artists this summer in the Madeline Tourtelot Archives and Study Center at the Peninsula School of Art in Fish Creek. The exhibition, titled INSPIRED: The Folk Art of Albert, Ed, and Randy Zahn, runs from June 25 to Oct. 5.

Albert Zahn was a lifelong wood carver who emigrated from Pomerania, Germany to Door County as a child. After retiring from farming, Albert built a home, Birds Park, at the north end of Baileys Harbor. He transformed the home and surroundings into a total art environment of carved and painted birds and other imaginative figures. He carved deer, angels, family tree towers, and biblical figures that were painted by his wife Louise and then attached to the exterior of the house and displayed in the yard.

Albert’s carvings are unique, imaginative and sincere. His work was inspired by his love of nature and family. Today his carvings reside in the permanent collections of the Milwaukee Art Museum, the Kohler Art Museum, and the Smithsonian Institution in Washington, D.C. His house, still known as Birds Park, is now on the National Register of Historic Places. 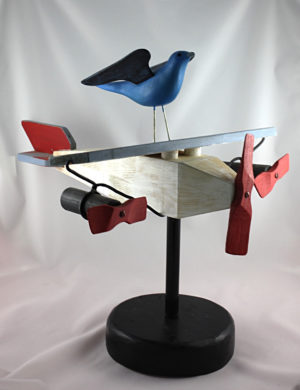 “Bird on Plane” by Ed Zahn.

Albert’s artistic legacy inspired his grandson, Ed Zahn, a cabinetmaker by trade, to carve birds, angels, Prussian soldiers, and bird trees in the style of his well-known grandfather.

A fourth generation, Randy Zahn is also following in his great-grandfather’s footsteps, carrying on the artistic legacy with delightful hand carved and brightly painted birds, some of which are on display at the Milwaukee Art Museum.

Exhibition hours are Wednesdays from 10 am to 2 pm or by appointment. The Archive building is located on the grounds of the Peninsula School of Art, located at 3900 County F in Fish Creek. For more information, call 920.868.3455 or email [email protected]