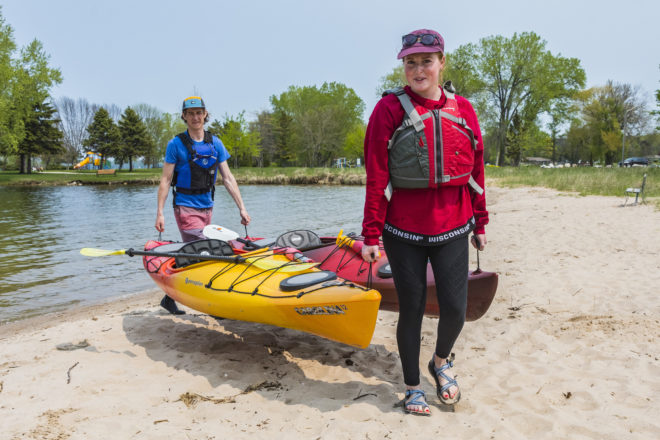 Writer Celeste Benzschawel kayaked down the Sturgeon Bay shipping canal for a story during her 2019 summer internship with the Peninsula Pulse. Photo by Len Villano.

For those in search of serenity on the water, there is no shortage of destinations around the Door peninsula. But when our editors wanted a glimpse of an excursion down the busy Sturgeon Bay shipping canal and bay, I was happy to accept the assignment.

My only real prior kayaking experience was going up and down the shore of Lake Winnebago for 30 minutes tops, and scraping the bottom of my kayak along the most shallow parts of the Sheboygan River while balancing a beer in my lap.

The task of kayaking the canal was a bit daunting: it’s 1.3 miles long. That may sound like nothing to a more experienced kayaker, but remember who we’re talking about here. I cheated a bit so I wouldn’t be sore until the end of summer, launching from three spots along the waterway to get a glimpse of different points along the route. And to save myself from defeat, I took along a guide for instruction, encouragement and safety (mostly safety).

Mark Schuster of Bay Shore Outfitters provided me with a kayak, a paddle, a life jacket and a guide: local resident Thomas Stasiak. He grew up in Door County and knows the area well. He’ll soon be starting a job with the Greater Escarpment Organization of Door County and the Door County Land Trust.

We launched beneath sunny skies into calm waters beneath the Bayview Bridge that bypasses downtown Sturgeon Bay. Our entry point allowed us to see the city in one direction and the end of the canal in the other. Looking east toward Lake Michigan, the canal narrowed in the distance, making the opening to the lake look like a speck.

We paddled beneath the bridge and around the Madelyn Marina, looking at the charter fishing boats docked there. Though I was mostly focused on not falling behind, I noticed how quiet the area was. Not one car passed by on the nearby road; no one was docking or pulling out to fish.

Next we decided to try out the waters near Fincantieri Bay Shipbuilding, the city’s largest employer and a bustling hub of massive lakers in the winter. My previous kayaking experiences have been serene, tucked away somewhere in nature, but the noisy shipyard was the opposite: the clanging of metal and construction filled the air. Views of the machinery and cranes of the city’s hallmark industry were juxtaposed with views of Potawatomi State Park and other surrounding landscapes of the bay.

Next we headed to the Ship Canal Preserve — part of the Door County Land Trust — to see where the canal meets the daunting waters of Lake Michigan.

The seas were more calm away from the city, and they were clear, too — I could see the old wooden-poled barriers in the water along the shore. Some were fully submerged — large and kind of scary. (I might have submechanophobia, the fear of human-made objects under water.) Stasiak said they’re meant to keep boats from drifting when coming through the canal: “kind of like bumpers in bowling.”

While kayaking through the rest of the canal to Lake Michigan, we could feel the air getting colder and see lush greenery surrounding us on both sides as we approached the Canal Station Light Tower and the famous North Pierhead Light.

The water became a deeper shade of blue; the seagulls went into a noisy frenzy as we approached the piers; and an almost nauseating scent of fish permeated the air. Still, after four hours of kayaking, I was hungry.

And with that, our journey was over — a journey revealing two sides to the bay along one short stretch of water. Plus, I got a free ab workout. You decide which is better.