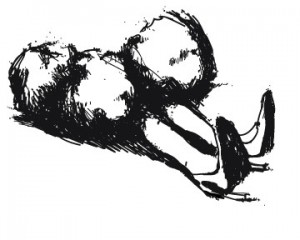 She handed them to me like they were precious – three stones. She is Grace, my granddaughter, and the stones were random bits of gravel from the farmyard she thought valuable because “they glittered.” Childhood is good at baseline economics of the earth. To value common stones, or dandelions as proper flowers, which of course they are but adults are not so generous. Perhaps beyond our replication this is what grandchildren are so good at, extolling the value of the common.

Listening to BBC this morning at about 5 am I was both fascinated and repulsed by an interview with the designer of high heel shoes for women, five-inch heels with bright red soles that sell for something in that realm of $1,500 a pair. The man was quite bitter that there were knock-off look-alike five-inch heels with bright red soles coming out of Romania and Chile by the container load at a mere $100 a pair. The interviewer asked him whether they were “comfortable shoes,” whether women could catch a bus wearing these shoes? The designer sounded almost indignant that they should have to run because someone seeing the shoes would offer them a ride.

Any average kid hearing of this nuance of style would wonder what then might be the effect on female allure if they attempted bright red stilts, say two feet high. Then no one would ask if females could run in stilts much less if they are comfortable because it’s the chance to breathe of the ionosphere that matters. If also the rare air of allure at $1,500 a pair.

I do occasionally buy my wife high heel shoes for which she has a rule. They are sex toys only and not to be worn to town, never mind that is another kind of toying. According to my wife high heels make her slightly dizzy which is probably the point as far as the male perspective is concerned. To be at hand and of service to dizzy females, lest they need our support.

Childhood is free of such considerations, children don’t know politics, children don’t know about money and rent and whether the food is organic or the beef fed grass. Children don’t yet know animals have no souls, that if you say the right things you get to go to heaven. A child will paint the soles of their Keds and think they are the same as $1,500 high heels.

I have often thought if there was a drug that could return us to those childlike appreciations wouldn’t it be a nice thing. There probably is and now that I recall, I had friends who were conversant with such supplements that allowed them to act like a child that in the end wasn’t very attractive.

I have the three stones from my granddaughter on my desk as I write, myself I don’t see the glitter. When she visits I’ll break up one of the stones with a hammer and look at it through the microscope, 30 Power should do it. It never ceases to amaze me what ordinary things look like when blown out of proportion. I suspect we will see glitter, something very like diamonds or gold from the farmyard stones.

I wonder if the point sometimes isn’t always finding a cheap method of doing red-soled high heels. Not so long time ago Dick Tracy was the only person with a walkie-talkie wristwatch. If the cell phone isn’t precisely a wristwatch it does tell time and the weather and corn futures, I can Google Earl Scruggs on my telephone and hear bluegrass banjo while driving a tractor. My granddaughter Grace would call this “glitter.”