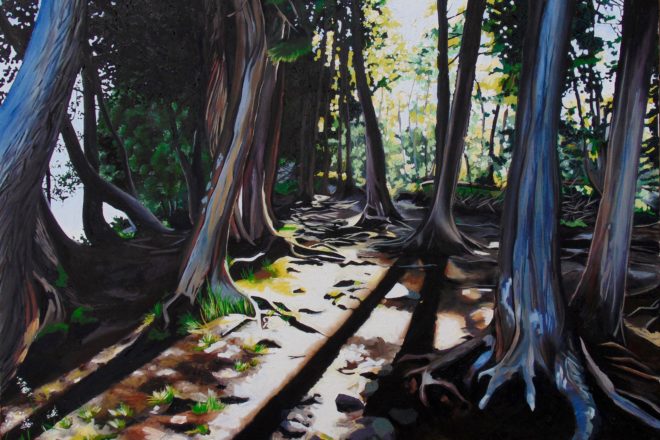 To the Dunes! by Sophie Perry

Last summer, as I was enjoying a delicious soup-and-baguette combo at the now-bygone Base Camp Coffee, I found myself captivated by a series of paintings displayed on the cafe’s walls. The places depicted in the oil paintings looked familiar in a way, as though I might once have been standing in the same spot where the artist had painted them. Those vivid, light-filled scenes stayed with me, so I was glad I had picked up the business card of the artist, Sophie Perry, when I again came upon her work during the Hardy Gallery’s recent Juried Exhibition.

The paintings I had seen in 2019 were part of a series called Cabin Days. While working on these paintings, Perry was inspired by places and scenes around Door County whose distinctive nuances any resident or frequent visitor would recognize: depictions of a rocky shoreline with cedars, a harbor at dusk, and several perspectives of a seasoned log cabin.

Perry’s painting style is described as straddling the line between photo-realism and expressionism, which, arguably, is the way we hold our memories: not a snapshot of detailed visuals as a perfect perspective or representation, but a conglomerate of details that we’ve noticed – consciously or unconsciously – and that take on meaning from our emotions and state of mind in that moment. As Perry describes it, her paintings explore spaces “through the filter of human memory.” Her memories of spending summers at her family’s vacation home in Ellison Bay inspired Cabin Days.

“I think my style is sort of unique: photo-realistic with a strong illustrative influence that makes my work feel intimate and nostalgic,” Perry said. Although the Ellison Bay home has since been sold, she and her husband and young son now travel often to Washington Island for getaways from their home base in Milwaukee. Residents and visitors to the island can see a small group of Perry’s paintings called Lake Sketches at the Washington Island Art and Nature Center through Labor Day.

With the Cabin Days series completed, she’s now at work on a new collection called Out of Fashion. These pieces still have Door County influences, but they will go beyond the peninsula to other places where Perry has spent time.

“This series is [composed] of works that convey spaces that are personally resonant to me,” she said. “They evoke for me a keen sense of nostalgia, a love for place. My hope is that through art – through their representation – that they may emanate this familiarity and resonance for others as well.”

These new pieces venture further into more vibrant palettes and include more material – manufactured elements to juxtapose with the natural ones.

“I enjoy exploring this intersection of man-made objects and nature and how we create our own little worlds within a much larger, more dominant natural world,” Perry explained.

For example, in “Afternoon Delight,” the scene is essentially a living room space, with a couch near a coffee table holding a vase, and a side table holding books and a bowl. Yet those items are peripheral details. The sunlight streaming in and puddling on the sleeping, blanketed figure on the couch is what commands the viewer’s attention and stokes one’s own memories. It’s this experience of lounging during the late-afternoon glow that is familiar and that – despite a wholly unfamiliar setting – most viewers can relate to.

Perry’s “To the Dunes!” painting, also a part of her latest series, was recently displayed at the Hardy Gallery in Ephraim as part of its 58th annual Juried Exhibition. She earned the People’s Choice Award for the piece, which displays a high-contrast view of cedars in sunlight and shadow – a common theme in her work, although other elements have become part of her style.

“My paintings have definitely evolved and refined over the years,” Perry said. “It’s nothing intentional, which is always interesting to me. My color palette and style have become more fine-tuned each year.”

Perry finds the inspiration for her subjects through her experiences. As part of her process, she takes photos to capture various parts of a place and then refers to them while painting to best translate the feelings she had while in that place. It’s an artistic challenge she’s still trying to master – an effort to find the right depth and balance of light and dark, she explained.

“I take photos and comb through those photos to see what will work with a composition. Over the years, I’ve realized I like to take photos that are more flat, but a great photo won’t always make a great painting.”

Her goal is to make viewers feel as though they’re “in” the painting, rather than viewing the scene from afar, as many traditional landscapes are portrayed. For me, it was easy to fall into the evocative scenes and connect to the memories they generated. Each painting seems to emit something abstract, but perceptible – or, as Perry described it, “emanate familiarity.”

You can view a new piece by Perry at the Miller Art Museum’s 45th annual Juried Exhibition in downtown Sturgeon Bay, Aug. 29 – Oct. 19. Her work is also frequently featured in the showroom of Peabody’s Interiors in Milwaukee. Visit sophieperry.com to find more information and news.