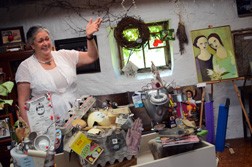 Renee Hilgers shows off her various assemblage creations at Alchemy Fields, a converted barn featuring work by artists of many mediums. Photo by Katie Sikora.

The gallery of Alchemy Fields, a converted barn, smells like a grandparent’s attic full of treasures and memories. Renee Hilgers displays her collections of black typewriters, large and small globes, phones of various colors from throughout the past century, and her detailed, intrinsic assemblages with care.

“I honestly don’t know where this came from,” Hilgers says of her ability to create mixed-media, sculptural-like pieces that invoke a feeling, portray an era. “I’ve always had an artistic flair and as a kid loved collecting things,” she explains.

Hilgers gathers objects to create her pieces from “Bargains Unlimited, garage sales, friends who are clearing out – getting rid of stuff they don’t want to deal with,” she says.

Her artistic process begins with “an image I get,” she explains. She gestures to a cut-out of a middle-aged waitress in a pink uniform complete with a white apron – the centerpiece of one of her assemblages, “I loved her, an old waitress from diners – so I started with that.” One piece features a mermaid, another a wild-west cowboy, another a bright red car.

“I once found an old computer case and Andy Warhol popped in my mind. It was odd and one of the last pieces I thought would sell,” recalls Hilgers. “But then this woman who owns an original Marilyn Monroe print by Warhol walked in and wanted it.” 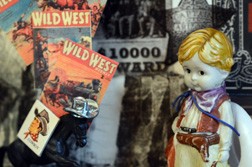 “I like the idea of repurposing. I think people like that idea – not just throwing stuff in the landfill. You throw nothing away,” she says, surveying her pieces, which feature themes ranging from nautical to culinary to her past.

“I’m working on a piece with all my high school chums from Danville, Illinois – the Danville Vikings. I graduated in 1969,” she says. Using the framework of an old computer, she has begun to create her old high school and place yearbook images of her friends on paper dolls. “I haven’t figured out how I will put it all together yet,” she laughs.

After graduating from Danville High School, Hilgers trekked across the country to San Diego State, where she received a bachelor degree in marketing. “I didn’t use anything I learned in college,” she laughs. “I think you learn by doing.”

Hilgers and her husband, Larry, opened Alchemy Fields in 1992. Then the inventory included antique and artist dolls and bears, as well as children’s tea sets and trains. Soon she began to feature “nature creations” as she refers to them, wreaths and swags created from driftwood, pine cones, dried flowers, and cherry pits. 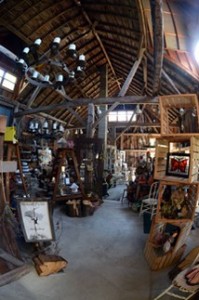 Alchemy Fields features work by many artists as well as various antiques to complement the space. Photo by Katie Sikora.

Even the 80-year-old property reflects this idea. “We wanted to protect the property,” says Hilgers. “Everyone who has owned it before us has made the place better.” The Secretary of Interior listed alchemy Fields, once known as the William Zachow Farmstead, on the National Register and State Register of Historic Places in 1997.

After selling out the inventory of dolls and bears, hosting a wedding for her son, Hilgers decided the shop “would be my deal.”

July of last year, Hilgers opened the shop as a gallery. She shares her artistic talent by offering a series of assemblage workshops throughout the summer with fellow assemblage artists Tyler Lambert and Teresa Ann Gifford.

“I call us an eclectic group of artists,” laughs Hilgers.