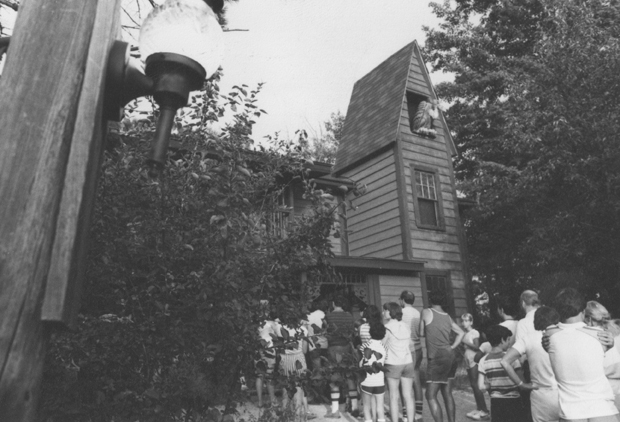 Memories of the haunted house at Thumb Fun still give people chills. Submitted.

Standing amid the suburban-style condominiums that make up the Northhaven development in Fish Creek, one can’t help but be struck by the contrast between what was and what is. Here, where water sprays into the air from the middle of a pond ringed by 141 condominium units, is the land that was once the site of Thumb Fun, hallowed ground to generations of kids on Door County family vacations.

When Thumb Fun amusement park closed after the 1998 season, it represented the final shove that transitioned Northern Door into a different era, one where the Door County vacation was repackaged to appeal to the Baby Boomer crowd.

By contrast, Thumb Fun was the ghouls of the haunted mansion, the unabashed rowdiness of the bumper cars, and the thrills and screams of the Tilt-A-Whirl. It was families, first dates, and the smell of cotton candy and fresh popcorn.

“I think that initially Thumb Fun going out of business hurt Door County a lot,” says Digger DeGroot between answering questions from a steady stream of first-time visitors at the Fish Creek information center. “Families missed it a lot. Thumb Fun was iconic.”

DeGroot knows a bit about icons. He owned a landmark Door County restaurant, Digger’s Grill, for over 20 years.

The creation of Doug Butchart, the “progression of errors” that was Thumb Fun became an attraction unlike any in the county before or since. A nightly county fair that operated from May through Halloween, the park welcomed 3,000 to 4,000 people through its doors on busy summer days. It featured an arcade, a drive-up restaurant, go-karts, bumper boats, a train, and a classic pre-World War II carousel bought at auction from the old Funtown Amusement Park in Chicago. But two attractions stood above the rest. The mini-golf course, with its Frankenstein figure towering over the holes alongside Highway 42, and the Haunted House. 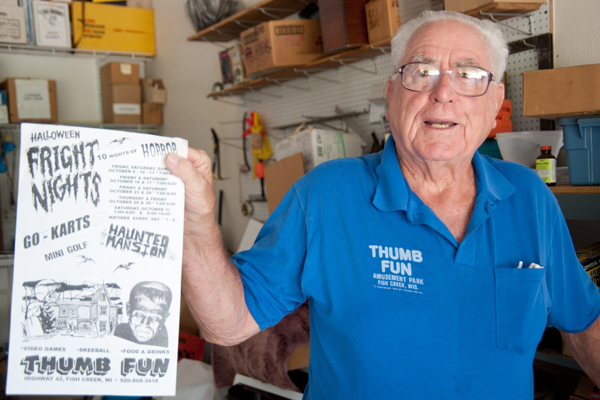 Doug Butchart, at 80, would go back to his amusement park days in a heartbeat. Photo by Dan Eggert.

Butchart turned 80 years old this year, but he remains very much the same caricature of the man that he was when DeGroot says he was nicknamed “the Walt Disney of Door County.” His white bushy eyebrows match his thick hair, and a Santa’s belly sits atop matchstick legs. His mind works in tangents, as an ever-rushing flow of ideas takes him darting from one thought to the next. “He’s a total carnie,” DeGroot says. Even today, nearly 12 years after he closed the park, his eyes spark with excitement as he recounts the story of a ride “find” at an auction or a deal that made good. His inflections are still those of a promoter and salesman.

“We set up the American Raceway track, and I tell ya, it was an IN-STANT-TANEOUS SUCCESS.”

Thumb Fun began as a dive shop, originally located in Egg Harbor, but moved to Fish Creek in 1961. The property along Highway 42 just north of Gibraltar School had once been a driving range, and Butchart re-opened the range, which proved far more profitable than the dive shop. He soon added mini golf at 50 cents a game, with free popcorn at the end for kids. Then, a man proposed he put a pinball machine in.

“I told him, ‘I don’t want those damn things in here, they make too much noise.’” But Butchart relented and allowed him to bring in a primitive driving game, with the stipulation that the man come pick it up at the end of the week. “He came back in a week and pulled $170 out of it! ‘Holy mackerel,’ I said. ‘Line em up!’”

But Thumb Fun didn’t add its defining symbol until 1971. That’s when Butchart, Toby Schlick, and Weldon Blum went in on a deal to build a haunted house on the property. It met with instant success.

“We had people lined up, packed in lines four-wide, as soon we opened,” he said. “We had the thing paid for by Labor Day.”

But they stumbled on the secret to its lasting success by accident. To protect the props from getting torn up by kids, they put a person inside the house, dressed in all black to stay hidden, to watch people. Eventually a customer touched him “and when the guy moved, it spooked the heck out of the customer and he went sprinting out,” Butchart said. “Then we knew we had something.”

The house featured three to seven live actors from then on, possibly the first haunted house to do so. They had to remodel the house to provide secret passages, which became part of the house’s mystery, for the actors to move around without anyone seeing them.

The Thumb Fun Hearse became a staple in Fourth of July parades, one of many promotional gimmicks Butchart became famous for.

He traveled the Fox Valley, dropping free passes at businesses and offices for use in employee parties. He bought local television spots when it was cheapest, during Saturday morning cartoons, getting kids begging their parents to go to Thumb Fun. Every year he tried to add something new to the park to create buzz, and in 1992, he swung for the fences and installed a water slide at a cost of $1.2 million.

“We opened on June 13th and the temperature was 85 degrees,” he said. “We were swamped!”

But the weather didn’t cooperate. The rest of the summer the slide was open only 23 days, and year one was a financial disaster. In years to come though, the slide grew more popular and proved a success.

Butchart recounts the history of the water slide and the park for five hours on a Saturday in May, when he was once gearing up for the season. Today, he lives in a non-descript house just a few steps from the old site of Thumb Fun. DeGroot, as fate would have it, now lives in a condo at Northhaven.

Butchart’s coffee table is smothered in stacks of tourism trade publications and other industry periodicals. One could be forgiven for thinking this is not the home of a retired man. We go through shoeboxes full of photos and clips and a garage filled with leftovers from Thumb Fun, mostly of the non-sentimental variety. Before I leave, he tells me of a deal he worked out with Nor-Door Sport and Cyclery, the bike shop down the road, to sell off his stash of blinking red tail-lights for bikes.

It’s clear he still loves the business, that he’s still a “carnie.” So why did he get out of it? He says it was a combination of age, opportunity, and a desire to free his daughter and right-hand lady, Peggy, to pursue a life outside the confines of the park. 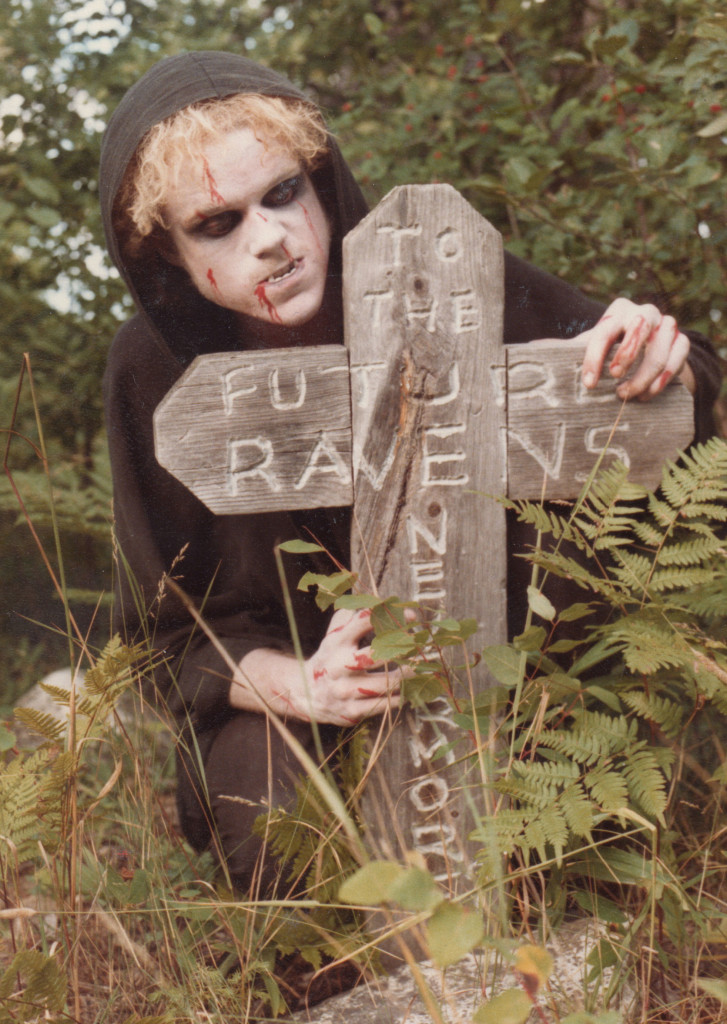 Images like this haunted generations of Door County children…and adults.

“My biggest problems were labor,” he says. “We had 106 employees that final year. Peggy handled the kids, she was wonderful with employees, but I was a pain in the butt with them after a while.”

Peggy wanted a family of her own, not a life confined to the amusement park business. Then, out of the blue, a developer expressed interest in the property.

Butchart still owed over a million dollars on the water slide, and the offer covered that and then some. It also offered the chance to set Peggy free.

“Peggy said, “Dad, most people retire when they’re 65. And you’re out here at 69 working out here all day long. And I want to have a family.’ And she was right,” Butchart says. “I was not capable of doing it alone anymore. I realized it was time, and the buyers had created the opportunity. I thought, geez, this might not come up again.” 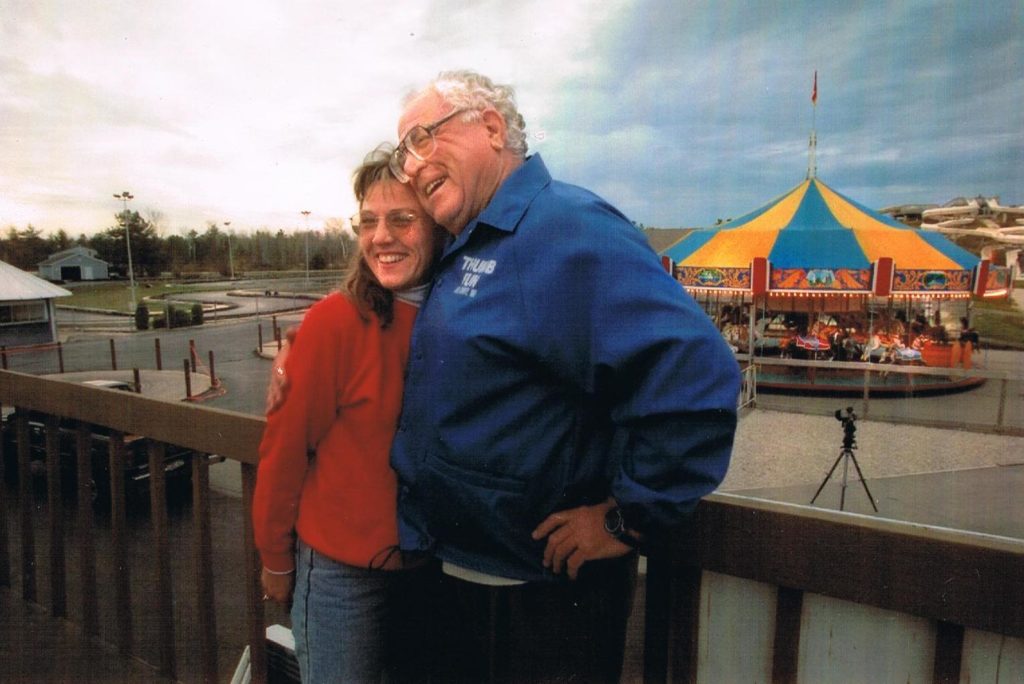 Dough Butchart with his daughter Peggy during the final day of operations at Thumb Fun Amusement Park in 1998. Submitted.

He didn’t try to find a buyer who would keep the park open, and none came to him. The land was now worth more than the park. By 1998, Butchart was paying six times as much in taxes as he had originally paid for the land.

On Halloween night, 1998, the park opened for the final time. Hundreds showed up, including many former employees. When the lights went out and the last person had been spooked, the Haunted House closed, and so did an era of a different Door County.

Near the end of our conversation, he gets juiced up talking about the new plans for the amusement park being built at Coney Island. He hops on his computer and digs through the daily emails he gets from an amusement park trade publication. He has read them all, ever in search of ideas. Ever a carnie.

“If I were younger,” he says wishfully, “I’d go back into it in a minute.” 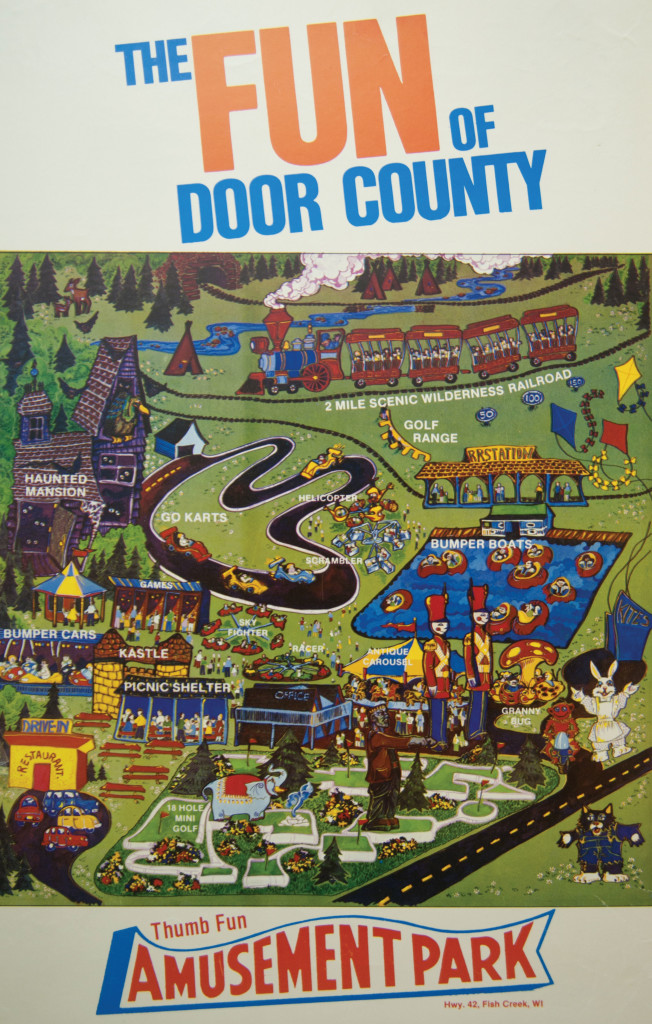