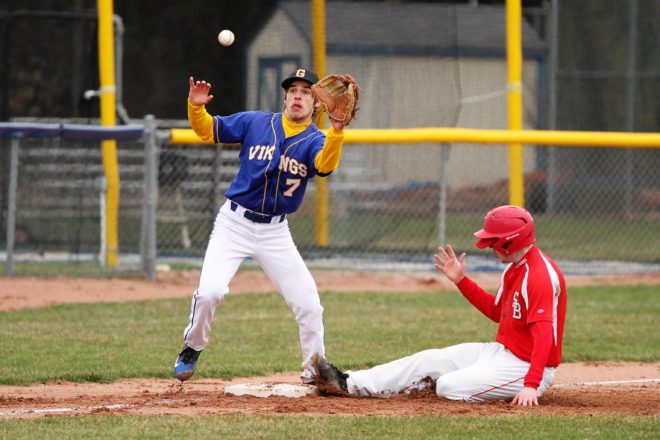 Ryan Jacobson is safe at third base before Luke Steebs is able to catch the ball. Photo by Deanna Reinhardt.

“Solid performance by Jake in his second consecutive shutout,” Sturgeon Bay coach John Berns said. “Jake kept throwing strikes, and for the most part, we kept making plays on defense. He only needed 72 pitches for a  complete seven-inning game, which is one of the lowest pitch counts you will ever see for that length of game.”

Andras Szakala hit a double for Gibraltar. Trevor Reinhardt and Griffin Reinhardt each added a single.

Sturgeon Bay, 7-1 overall and 4-0 in the Packerland Conference, travels to Peshtigo Monday. The Bulldogs, who Berns considers the favorite to win the Packerland title, enters the game with one conference loss.

“Both teams return outstanding pitching and three all-conference players from last year,” Berns said. “It’s two very even teams, which explains why these two teams tied for the 2018 Packerland Conference title. To defeat them we can’t strike out 14 times like we did last year when we lost 5-4 in our only meeting of the season.”

Grace LeGrave, Lexi Wery, Jackie Atkins and Kendra Dantoin led the Eagles’ 10-hit attack with a pair of hits each. LeGrave, Wery and Atkins each had an RBI.

Wery struck out five batters in four innings to pick up the win. LeGrave pitched the final three innings and struck out three.

The Clippers struck for 11 runs in the first three innings. The Vikings rallied for four runs in the bottom of the third inning on a grand slam from Karlee Kita, but the Clippers responded with a run in the fifth inning and two in the seventh to put the game out of reach.

Despite out shooting NEW Lutheran 19-5, the Clippers were unable to score. Coach Bob Desotelle said the Blazers’ stout defense was the difference in the match.

“Our team passed well, worked hard and controlled much of the game, but finishing with a goal in the final third of the field was our nemesis tonight,” he said. “We played consistently tonight, but this was one of those wonky games where one small breakdown can be the difference maker.”

Sturgeon Bay travels to Kohler for a tournament Saturday.