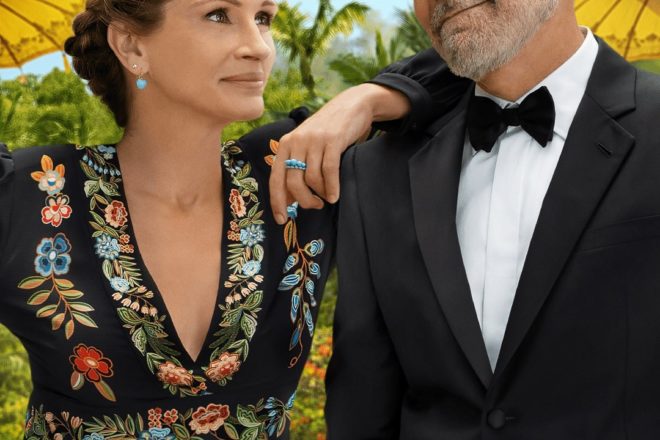 In movies – as in life – looks can be deceiving.

From all appearances, Ticket to Paradise (PG-13) looks like a sure thing: Two of the most glamorous A-list movie stars (Julia Roberts and George Clooney) playing the leads, a solid supporting cast (including the always dependable Kaitlyn Dever), an engaging new face (Maxime Bouttier), an exotic setting (Bali – although the production was actually shot in Australia), and a director with a track record for making adult romantic comedies in visually stunning locales (Ol Parker of The Best Exotic Marigold Hotel franchise). So why does the film seem so … off?

The script by Parker and Daniel Pipski might be the culprit. It doesn’t really give the two stars at the center of this story much to do other than bicker until that moment when … well, if you’re familiar with the genre (and who isn’t?), it’s pretty obvious where all those insults will lead.

Roberts and Clooney play Georgia and David Cotton, and we meet them in an especially awkward montage at the beginning of the film during which they spend, apparently, most of their waking day ripping into each other for the benefit of hapless business associates and friends, even though they’ve been divorced for more than a decade and don’t even reside in the same zip code. Georgia runs a trendy art gallery in Los Angeles, and David works as a corporate lawyer somewhere out east.

The graduation of their daughter, Lily (Dever), from law school brings them together for a “miserable” weekend, which they do their best to endure, but then when Lily’s postgraduation vacation to Bali with her best gal pal, Wren (Billie Lourd, playing the sardonic sidekick to perfection), leads to romance with a dreamy island seaweed farmer named Gede (Bouttier), the Cottons declare a truce in order to break up the couple, convinced that if Lily marries, she will end up as bitter and angry as they are.

What ensues is a series of pranks and hijinks that are meant to be funny but come off as patronizing and cruel, especially in the context of the island culture that Lily wants to adopt as her own. I kept wondering how a girl so grounded and considerate was born of these two jerks. It’s true familial love that she wants anything to do with them at all.

There’s a humorous subplot involving a hunky pilot named Paul (played by Lucas Bravo), whom Georgia seems to be dating just to annoy her ex. Paul is so smitten and intent on marrying her that he follows her to Bali, figuring that a wedding in a tropical paradise might be just the right setting to melt her icy heart, but every knee-bent proposal is interrupted by someone or something, much to Georgia’s relief and David’s snarky amusement.

The purpose of these scenes is to rekindle the romance between Georgia and David – love being the flip side of hate and all – but the cumulative effect only underscores how self-centered and insensitive they are to just about everyone they encounter.

By the time the film grinds to its inevitable conclusion – with a tacked-on happy ending that seems like it belongs in a different movie – I had tired of my time with the Cottons, which is a shame. The credits include “bloopers” that make it clear just how much Roberts and Clooney enjoy working with each other. They have an unscripted charm that is captivating, so maybe the film should have been about two movie stars who like each other, playing themselves instead of the dreary Cottons: two killjoys who can spoil a destination wedding in paradise just by showing up.

Ticket to Paradise is currently in theaters, but look for it to stream later this month on Disney+.

In another lifetime, Mike Orlock wrote film reviews for the Reporter/Progress newspapers in the western suburbs of Chicago. He has also taught high school English, coached basketball and authored three books of poetry. He currently serves as Door County’s poet laureate.