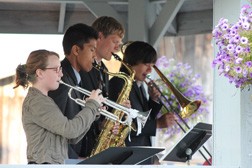 Birch Creek Music Performance Center is pleased to announce that tickets for the 2015 concert season are now available for purchase at birchcreek.org.

The Percussion and Steel Band Session, June 18-27, will kick off the season with “Celebrating Four Decades of Hits in the Barn” under Program Director Ben Wahlund. Birch Creek’s Percussion performances highlight a wide range of musical styles and influences such as Jazz, World Music, Rock, and more. The “Drumming Moves and Dance Grooves” performance on June 20 will feature Latin Dance instruction by Orlando Cotto, and the James Dutton Memorial Concert will take place on June 26.

Symphony session concerts, under the direction of Ricardo Casta?eda, will then run July 2-11, featuring an array of works by composers such as Beethoven, Tchaikovsky, Bach, and Sousa. The annual Pie & Ice Cream Social beginning at 5:30 pm will precede the July 4 concert, free for children ages 6-11.

Ticket Prices are $29 adults, $10 students and $6 children. Birch Creek also offers a premium seating area for $34. Group rates available for parties of 20 or more. All performances begin at 8 pm, with the exception of the July 4 concert, which begins at 6:30 pm. Prelude music is held 30-45 minutes before every performance in the courtyard gazebo or in Juniper Hall. For more information visit birchcreek.org.