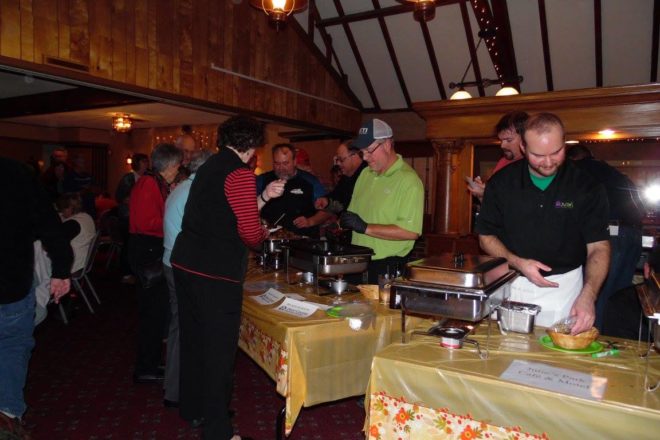 Guests line up for a sampling of ribs at Neighbor to Neighbor’s 2016 event. This year’s Rib Fest is Nov. 11. Submitted.

Lynell Pickering-Blucher works for a company that sells medical equipment, but she’s putting forth a great effort this week for an organization that loans much of the same equipment for free.

She and her husband, Luther, just marinated about 20 slabs of ribs to charcoal-grill for the nearly sold-out Rib Fest cook-off Saturday to raise funds for Neighbor To Neighbor.

“They’re sort of the competition but it is a great thing to have in this community because not enough people can afford to buy a wheelchair or walker,” said Pickering-Blucher, who is a consultant for people who have had mastectomies.

And her employer, Bayside Home Medical, is sponsoring her in the ninth annual Rib Fest, which takes place Saturday at The Lodge at Leathem Smith in Sturgeon Bay.

Pickering-Blucher doesn’t seriously think of Neighbor to Neighbor Volunteer Caregivers as competition. After all, the organization helped more than 1,500 clients last year. It not only has medical equipment to loan from its locations in Sturgeon Bay, northern Door County and Washington Island, it also gives caregivers a break by providing volunteers through its respite care program. Plus, its volunteers check on, sit with or run errands for homebound residents through the Peer Companions program.

What Pickering-Blucher is serious about is competing for first place against the other cooks – first-time entry Dr. John J. Beck; perennial competitor Casey’s Barbecue and Smokehouse of Egg Harbor; Sonny’s Pizzeria, Door County Fire Co. and The Lodge at Leathem Smith of Sturgeon Bay; and Jeff’s Sports Bar and Grill of Kewaunee. Mr. G’s took a year off from the competition.

The Pickering-Blucher pair, who are from St. Thomas, Virgin Islands and St. Vincent, again will provide a Caribbean-style rib for everyone to taste. They’re coming off a third-place finish.

“We’re going to tweak it because we want to come home with first place this year,” she said.

Lodge at Leathem Smith proprietors Holly and Paul Meleen are preparing not only their space for the chefs and for 250 people who bought $20 tickets but also are preparing ribs to enter in the competition.

“We’re honored to host it,” Paul said of the Neighbor to Neighbor fundraiser. “We think it’s an important part of the community and we want to support it.”

Meleen said Rib Fest is a hot ticket. He heard only about a dozen tickets were left at the end of last week. He said he’s glad to see some new entries for the event, which he knows will sell out.

The Meleens said they’ll change their recipe a bit for the diners, each of whom will receive one rib from each of the seven chefs.

It behooves competitors to make sure they don’t run out of ribs – each diner votes, every vote counts and winning restaurants often use a win as marketing material, said Ann Bennett, Neighbor to Neighbor executive director.

EconoFoods provides baked beans and coleslaw for all, and volunteers bake desserts to fill a platter on each table.

Neighbor to Neighbor’s peer companion program tends to see an increase in referrals in winter and fall, when some elderly residents may have trouble driving or even getting to their mailboxes, Bennett said.

In addition to that program and the respite care program – which helps caregivers get out to buy groceries or have time for themselves – Neighbor to Neighbor hosts the Lemonade Club support group for cancer patients and survivors.