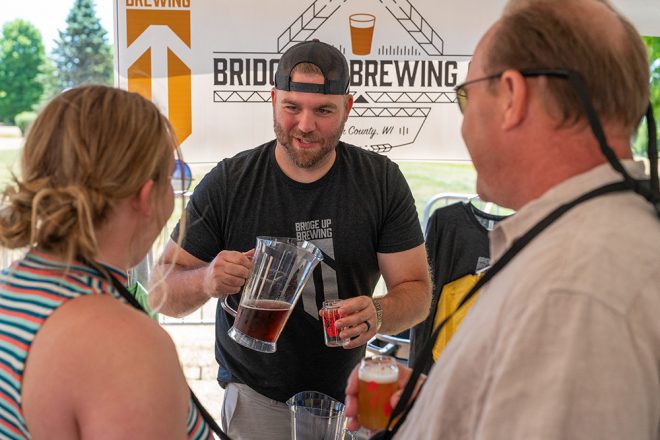 Beers, beards, pretzels and hats. The 2021 Beer Festival on Saturday was the place to see and be seen, and sample delicious beer. Photo by Brett Kosmider.

This Father’s Day Saturday, more than 1,000 beer lovers will gather at Maxwelton Braes in Baileys Harbor for one of the state’s best beer events. The 2022 Door County Beer Festival will return June 18 with more than 150 beers from 45 Midwestern craft breweries to sample.

The festival has become a must for those with experienced palates and those seeking to branch out. You’ll find beers of every genre and flavor, including much of the best from the Wisconsin and Door County beer scenes.

The VIP event has long since sold out, and general-admission tickets are going fast. Get yours at DoorCountyBeerFestival.com to find out why this festival is a must for beer aficionados.

The open-air tasting brings dozens of craft breweries to the peninsula for tasting, conversation and fun. Meet the brewers behind many of your favorite beers; chat with other Midwestern beer lovers; and enjoy food served street-food–style from local chefs from Jamaican Door, Dog House and Great Lakes BBQ.