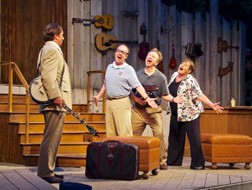 “Strings Attached” was also performed for the 2014 season. Submitted photo.

Northern Sky Theater (the new name of American Folklore Theatre) announces tickets are now on sale for the 2015 summer season, playing in repertory at their outdoor amphitheater in Peninsula State Park.

No Bones About It, a “rib-tickling” new musical set in the world of competitive barbecue, is the sixth offering from the Richard Rogers award-winning writing team of Dave Hudson and Paul Libman, the creators of Cheeseheads, the Musical and Muskie Love. The cast will feature Doug Mancheski, Rhonda Rae Busch, Eva Nimmer, Chase Stoeger, Bill Theisen, and new company members Alex Campea and Kelly Doherty.

Northern Sky’s summer season runs from June 11 to Aug. 29. General admission tickets are $20 for adults, $10 for teens, and $6 for children 12 and under. Reserved seats are $7 more per ticket. There is no park sticker required to attend performances in the state park. Tickets are on sale now at the Northern Sky box office at the Green Gables shops in north Ephraim, via phone at 920.854.6117 and online at NorthernSkyTheater.com. April office hours are 10 am to 4 pm Monday through Friday. Fall season tickets go on sale May 1.