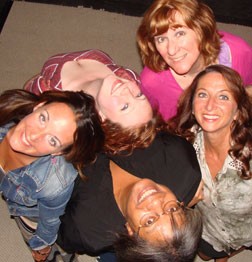 Higgins was born and raised in Alabama and started her theater career with the Writers Who Act in San Francisco, ultimately performing her work at various venues in the Bay Area. Her full-length play, Birmingham Blues, was read at the Magic Theater in San Francisco, and she is the author of the novel Blue Monday. Although a native of Alabama, she has lived in Placerville, Calif., for almost 20 years.

Alabama Bound ambles the dusty back roads of Alabama with five memorable, edgy Southern women. Each of the women has a unique point of view. It quickly becomes clear that these women are bound in the sense that they are tied to this place through their history and circumstances. These memorable women, whose voices are seldom heard, contain power, biting humor, tragedy and wisdom.

Performances began on July 17 and will be held at The Depot PAC Wednesday, Thursday, Friday and Saturday at 7:30 pm, with a Sunday matinee at 2 pm. The Depot PAC is located at 341 N. Third Ave., Sturgeon Bay. Tickets are $15, and are available by calling 920.818.0816 or at Greco Gallery and Avenson Photography, also on Third Ave. A portion of this show’s proceeds will go to the Women’s Fund of Door County.