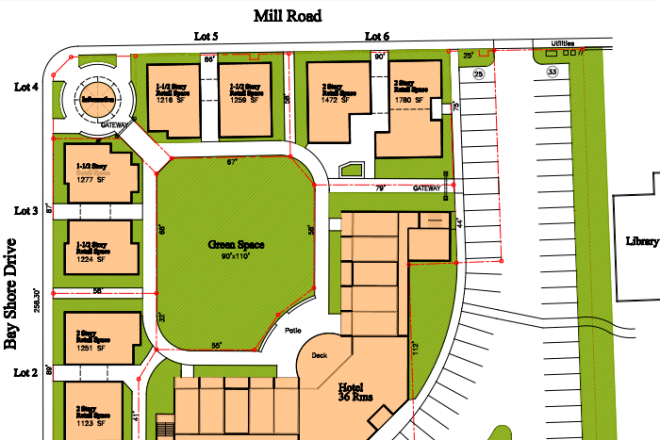 The preliminary plan of the Braun property accepted by the village board. Produced by Steve Thomas.

With the highway near completion and the beach up and running, the conversation at the Feb. 16 Sister Bay Village Board meeting centered on spurring development. But conversation had some urgency as board members and developers discussed the village’s Tax Increment Financing (TIF) expiration date in seven years.

The village needs to pay back its $6.8 million of debt incurred from the highway reconstruction and other property acquisitions in the next seven years, which can be extended until 2025 under distress. It hopes to do so through increasing property tax revenue following economic development.

The village is looking for that development on its empty lots, including the Braun property and the old school house property overlooking the downtown district.

“It doesn’t do the village any good to sell property and to sit on it and try not to capitalize on the TIF,” said board member Pat Duffy at the meeting.

A TIF is a district within a municipality that can be used to spur economic development by offering benefits such as crediting developers or building infrastructure. These incentives for development will hopefully increase property values and, in turn, property taxes. The municipality can then use that increased property tax revenue to pay for these financing projects. After those payments are made, the increased property tax revenue can be used for other municipal improvements or allow a decrease in the tax levy for residents.

In Sister Bay’s case, the TIF was established to revitalize the blighted downtown district. This included purchasing property and paying for improvements such as the highway reconstruction. It is assumed that these projects will attract private enterprise that will increase property value. The added tax revenue from those new developments will retroactively pay back the debt.

But those developments haven’t been fully realized yet. The assessed value of Sister Bay has increased less than one-tenth percent since the TIF was established in 2008. Although likely due in part to the economic recession, with a more stable economy and brand new highway, Sister Bay now looks to recoup that debt.

“Three years ago was the first time that our TIF turned positive,” said Village Administrator Zeke Jackson in an interview. After starting the TIF in 2008, the village bought properties it hoped could turn into development projects, causing the TIF to slide negative even further.

But it’s not enough to just sell the property. The village also needs to see some buildings go up.

“I think the idea is we don’t want to encourage speculative buying,” said Duffy. “We want to sell for development to capitalize on the TIF.”

Taxing on buildings that aren’t there

A lot in downtown Sister Bay with a water view in front of a major highway reconstruction is an attractive buy for someone who would simply hold onto the property and let its value appreciate. To avoid these speculative buyers, Sister Bay brought forward a tax concept called minimum assessed value.

This idea imposes taxes on a developed property whether it has been built on or not. When entering into a development agreement, a municipality can impose a minimum assessed value to incentivize the developer to build rather than watch an empty lot appreciate. In its meeting, the village board used this in moving forward with plans on the old school property brought forth by developers Allen Gokey and Harbor View LLC.

“If his plan, within the next 12 months, is to build spec homes, that’s fine,” said Duffy. “Twelve months from now, if it’s there, great. If it’s not, we expect that tax money.”

Gokey was surprised at the concept of taxing on buildings that were not built, a common practice according to Jackson.

“Some of this, we never knew when we purchased the property that there was going to be some kind of payment due so this is all new to us,” said Gokey. “I would have my partners that are involved right now say, ‘Screw this.’ They wouldn’t have done the deal.”

In the original proposed purchase of the property, Gokey said he would like to build the first structure by the winter of 2014. At the time of the sale, Gokey committed to building on the property in 2015. According to Jackson, due to factors outside of his control, nothing was built. The minimum assessed value is a way to push the developer to start building.

“If you’re a developer and you’re holding a tax bill for $46,000 whether you’ve got a house on it or not, or a real estate unit, or commercial development on it, all of the sudden that carrying cost is much higher so you’re better off going, ‘Let me build’,” Jackson said.

At the board meeting, Gokey said they could guarantee development of a quarter of the property in two years. The taxed value is the minimum estimated value for the developed lot, which Gokey believes is somewhere between $150,000 and $180,000 for each of six lots.

So in two years, the board will tax that property as if 25 percent of the buildings are built, whether or not they have been built. The assessed amount will increase by one lot each year until all the lots are being taxed as if they were built upon or the entire property is actually developed. If the property is fully developed, the minimum assessed value is dropped and the property is assessed and taxed like any other lot.

That new property tax revenue will go toward payment of the village’s debt under the TIF.

This example at the old school property is likely to echo through sales of the Braun property, which the village board preliminarily approved to divide into smaller lots. The move to divide the property came at the end of years of dormancy while the village hoped for a single developer to come in and develop the entire lot. Since discussion about dividing the property began, Jackson said his phone has been “ringing off the hook.”

“The idea was that we would still seek the large developer to come in and take on the entire development,” said Jackson. “I do not think we are going to be incredibly successful at finding a single large developer.”

Jackson said the small properties will likely sell for between $70,000 and $100,000, a price where the village can return the cost of purchasing the lot but a price in which a business can manage the cost. Despite accepting a plan to divide the lot into smaller parcels, if Jackson gets a call from a large developer tomorrow looking to purchase and develop the entire property, the village would keep that door open.

“The situation we have is we have had this parcel for eight years and we’ve got nothing for it,” said Dave Lineau, board president. “I’m not ready to say let’s go cut this up and put condo plats together, but you’re going to have to do something when you have people come and say, ‘Yes, I want that lot.’”

When developers approach about the purchase of smaller lots, the village will likely return to the concept of minimum assessed value to encourage construction instead of speculative buying. In doing so, they will look for the development of the property to increase property tax revenue to pay back the debt created by the TIF.

The burden of the debt will fall on the taxpayer in some way, but the village hopes that the economic development will spread that burden over more properties that hold greater assessed value.

“Hopefully it’s all paid back,” said Jackson. “If that time is not sufficient to handle it, we’ll go to our auditors to basically write off that debt internally to the village or to engage in some other activity with which to remedy that… The village should always attempt to maximize outcomes for current and future taxpayers. For us to sit around idly and not maximize that outcome is not doing the current residents a service, nor is it doing future taxpayers a service.”