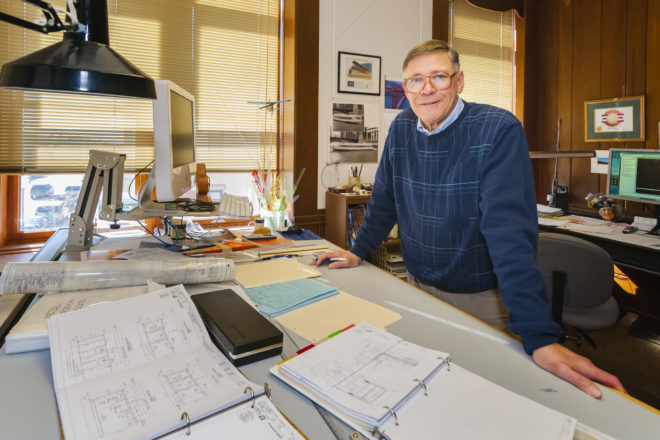 Tim Graul at his drafting table in his former Sturgeon Bay office. Photo by Len Villano.

Retired boat designer keeps his hand in as a consultant

Growing up on the banks of the mighty Mississippi River in the industrial town of Alton, Illinois, Tim Graul had boats on his brain from a young age.

“I always liked boats,” he said. “In the margins of my notebooks and school papers, I got into sketching boats. I went for my first boat ride with my dad, who was in the Coast Guard Temporary Reserve during World War II. Every Wednesday night, he and his buddies went out on a 38-foot picket boat, patrolling the Mississippi, looking for subversives. I don’t remember what the occasion was, but I remember distinctly going on that picket boat.”

His next boating memory was with one of his father’s good friends, who had a sailboat that he sailed on Lake Alton, a wide part of the Mississippi above Lock 26.

“A fair amount of small-boat sailing took place there,” Graul said. “He had a 15-footer. I went out with him on that. I remember being scared to death when it started heeling over. The sheer went under, and the gunnel went under water. I was sure we were going to capsize and sink in the muddy Mississippi. Nonetheless, I survived that.”

The idea of becoming a boat designer took hold of Graul’s mind in eighth grade.

“One of my junior high school buddies informed me there was actually a thing called naval architecture — people who designed boats,” he said. “I looked it up in the encyclopedia, and it looked way too technical for me. Nonetheless, I pursued it, and by the time I got into high school, I set my sights on getting into a school called Webb Institute, which is naval architecture only — a very specialized school. I did get accepted into that but didn’t last long. I found out I was woefully unprepared in math.”

“I got my grades up and got accepted at the University of Michigan in Ann Arbor [which has a naval-architecture and marine-engineering department] and continued my studies,” he said. “The best thing that ever happened to me there was meeting my wife, Barb. We’ve been together ever since — 54 years.”

During summer vacations, Gault returned to Alton, where he worked at a boatyard on the river.

“They were building small steel cruisers and pleasure craft up to about 40 feet. They got bigger and bigger and expanded,” he said. “I got to be very good friends with the owner. He’s just five years older than me, and we are friends to this day. He sold the company in 1969 or ’70 and had a career all over the world building boats. He’s the guy who really put me on the path. They hired me while I was going to school, and I started drawing boats for him and making designs they could build.”

Some of those projects Graul designed were small Navy vessels.

“As a result of that, I met Ellsworth Peterson at Navy conferences in Washington,” Graul said.

Peterson was a Sturgeon Bay native with a family history of shipbuilding and extensive naval connections. In 1965, he became president of Peterson Builders, Inc. (PBI), the Sturgeon Bay shipbuilding firm founded by his father.

Graul spent nine years as a designer at PBI, the high point of which was building a series of 225-foot tuna seiners for the West Coast tuna-fishing industry.

“That was the best experience of all,” he said. “We had a small office. Six or seven of us that handled all the design drawings and contract administration for those vessels. That was a real broadening building experience.”

PBI built what at the time was called the world’s largest tuna seiner: a 260-foot behemoth named Margaret L. after the wife of the seiner’s owner, Andrew Lococo.

“They sent me down to Panama, and I made a trip on that boat in January ’73,” Graul said. “Then it was five years later. The tuna business really took off, and StarKist [the largest tuna-canning company in the world, at that time owned by the H.J. Heinz Company] was bankrolling a fleet of new boats for owners in San Diego. Because Peterson had made a big impression on the tuna industry with the Margaret L. — everyone who saw it was impressed with the quality and high level of workmanship — they were successful in winning the contract for the first three, then two more and two more.”

Graul said getting to know what was required of any project was important before sitting down to do the design work.

“I got to run a lot of boats,” he said. “I always wanted to keep my hands in it — get dirty, scrape and paint and weld — either in the engine room or pilot house to see what makes it go. That’s the key element of any practice, whatever you’re in: You’ve got to be able to do the work, be able to understand the needs of a particular type of vessel.”

To that end when they were designing the fleet of tuna seiners, owners and operators from San Diego were sent to Sturgeon Bay to assist the designers in understanding what was needed.

“The chief engineer [of the Margaret L.] was the first one sent to Sturgeon Bay,” Graul said. “He didn’t speak a word of English. He was a Spaniard, but not only a Spaniard — a Basque [the Basque are an indigenous ethnic people in northern Spain and southern France with a language unrelated to other European languages and not related to any other living language]. We became very good friends, and I learned a lot from him. I got to know a lot of the fishermen from San Diego. The tuna industry was all about one-upmanship. Each one wanted their boat to be bigger and better, and with more pizzazz than his buddies had.

“The yard’s concern was to get the boats built,” Graul continued. “The owners came to us with a basic design. They defined the shape of the hull and specifications for everything that was to be in the boat. This is what goes here. These staterooms will be like this. But we had to develop all of the working drawings. There was a lot of infield engineering. We are the ones who went back and forth with the guys — how’s this going to work? At one point, we had four boats going at the same time in different stages of completion. It was a big project. It was fun, but it was time to move on. I always wanted to have my own design office.”

In 1981, PBI landed another Navy contract.

“That really left them no room at all for commercial work,” Graul said. “They had always thrived on Navy construction. That was just their stock-in-trade. When Peterson expanded to strictly Navy, I could see no future for myself. I wanted to be creative, design new stuff. So I had a very amicable parting.”

Graul’s pals at PBI chipped in to buy him a Hamilton drafting table made in Two Rivers, Wisconsin, and he rented an upstairs room at the old Bank of Sturgeon Bay at 3rd and Kentucky. He put out the word to friends that he had hung his own shingle and hired a young naval architect who had graduated from Webb Institute.

“Mark Pudlo came to work with me and stayed through thick and thin,” Graul said.

“Back in 1981, computers were just starting to come. We weren’t using email,” Graul said. “We had [industry] magazines. Telephones. State of the art was fax. Boy, we sent faxes everywhere.”

Then the work started rolling in.

“We got involved in the small-passenger-vessel business fairly early on,” Graul said. “I started out with a little boat for a builder in La Crosse. I built a couple of boats for him, and it was a mixed blessing. He knew what he wanted to do, and I wasn’t assertive enough. If there’s one thing I learned in the business, [it] is trust your instincts.”

The next couple of projects involved boats for the tourism industry.

First up was a 90-foot ferry called Madeline for the Madeline Island Ferry Line.

“That was one of the very first big jobs we had, and we had a great time building that boat,” Graul said. “The ferry line chose us to design the boat, and the ferry line built it themselves.”

“We turned out some pretty good boats. One or two of them became pretty well known,” Graul continued. “The Rosie O’Shea was a stern-wheel Mississippi River dinner boat in Naples, Florida. The same yard built a boat for Lake Tahoe, the Tahoe Queen. Turns out a lot of people rode on that boat. A welder caught that one on fire. We did another one for Lake Tahoe that was even bigger and became even more widely known.”

In a short time, Graul had jobs going from Lake Erie to La Crosse and Ashland.

“I needed to get there, so I had a chance to fulfill a lifelong dream and started taking flying lessons. Before long I had my pilot’s license,” Graul said. “Before long, I had my instrument rating, too, so if the weather is a little bad, I can still get there.”

In 2007 — after 26 years as Timothy Graul Marine Services — he decided to pull the plug and sold the business to Pudlo.

“He bought me out and moved on to his own career path,” Graul said. “I closed up the design work and signed a covenant not to compete, so I didn’t do any designing for five years.”

But Graul was nowhere near ready to retire. “I was doing marine surveys and consulting that didn’t compete with what Mark was doing,” he said.

In 2016, Graul officially closed his business and sold the drafting table.

“I’ve been retired ever since,” he said, but quickly added, “but I still keep my hand in.”

Lately, Graul has been traveling to Washington, D.C., as a Coast Guard consultant evaluating stability regulations.

“The main impetus came a couple years ago when the cargo ship El Faro was lost in a hurricane on the way to Puerto Rico,” Graul said. “Whenever there’s a shipwreck, Congress starts looking at whether the Coast Guard has strict enough rules. They wanted to get a spectrum of people involved in making the evaluations. The National Academy of Science was commissioned by the Coast Guard to come up with answers to questions about whether stability regulations need to be modernized or changed. I don’t think my end of the business, which is smaller vessels, is going to be impacted at all with new rules, but they will probably look harder at cargo ships. It’s an interesting thing for me to be part of.”