Washington Island’s community theatre, Island Players, has chosen Time Flies…A Matter of Life and Death, seven, short, inter-related one-acts by David Ives, as its winter production. Co-directors David Ranney and Carissa Mann have assembled a cast of 10 actors who weave into and out of character roles as the plays progress, making minor set changes and costume adjustments as they go. Props cross boundaries from one play to the next, poses and gestures in one context crop up in a later one. Thus a continuity, a flow of consciousness as each play circles the possibilities of time in its own way.

These Ives’ one acts are hilarious, absurd, fast moving, full of puns, off-balance rhythms, and unpredictable twists. Underlying are serious issues and questions requiring suspended belief. A lot of "What if…?" and "Consider this…." 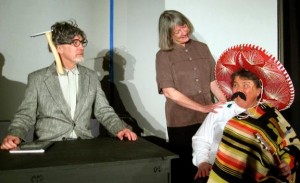 There is no intermission, no interruption of this merry confrontation with conventional concepts of time.

Island Players is taking this show to Madison, Wisconsin as well. There will be one performance on Saturday, February 23, 2008, 7:30 pm at the Oakwood Village auditorium. Contact Heidi at the Washington Hotel Coffee Room in Madison, 608.441.7599 for reservations and directions.

Time Flies… a Matter of Life and Death will be presented on Washington Island at The Washington Hotel on Friday, February 15 at 7 pm and on Saturday, February 16 at 2:30 pm and 7 pm. There is limited seating and parental discretion is advised. Tickets are $10 each and may be purchased at the Red Cup Coffee House and the Rec Center or by contacting producer, Charlotte Manning 920.847.2874, email: [email protected], beginning February 1.