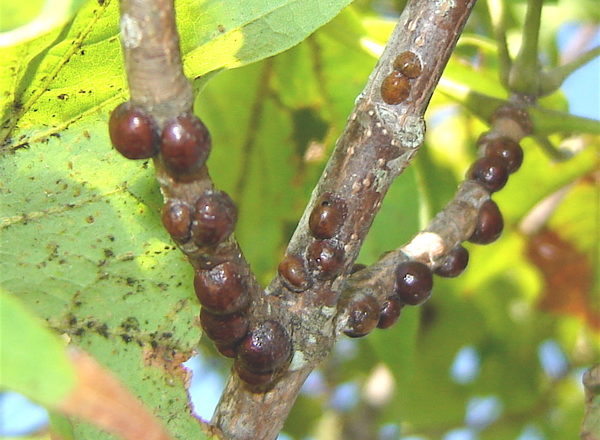 Scales on a maple tree.

The start of the 2015 summer started out like any other normal year, but when the temperatures started rising, the phone lines at Dave’s Tree Service started ringing off the hook with annoyed property owners wondering why their trees were making such a mess. They were going out every day to clean up their cars, the grills, anything under the trees.

“The question we get in a frustrated tone of voice is why are the trees dripping so much sap,” said Todd Burke, owner and certified arborist at Dave’s Tree Service (DTS). “Then that starts the conversation of what’s really going on. It’s not the trees themselves. The trees are an unwilling victim of an insect called scale. Many people have probably never heard of it, especially when insects like emerald ash borer and Japanese beetle get the bulk of the headlines nowadays. But the summer of 2015 scale was definitely the attention getter.”

Burke said scale populations can explode which is what we saw last summer.

“They are strange looking and don’t really look like an insect,” he said. “They remain in the same spot covered by a waxy protective coating as adults. They are often mistaken for buds, part of the bark, or something other than an insect.”

He said scales have narrow, tube-like mouths, which they use to suck fluids from the tree. Like aphids, scales can end up secreting sugary honeydew. This honeydew is the reason why the scale was so noticeable. In addition to being a sticky nuisance, honeydew can also lead to the growth of black, sooty mold and attract ants, wasps and other insects.

“Unfortunately, for how bad the scale was last year, it’s more than likely to be a problem again this summer,” Burke said. “In the meantime there are steps that can be done to help the problem. One is as simple as not having your yard sprayed for mosquitoes, which may kill some of the scales natural predators. The best option is to have an arborist come out evaluate your trees and come up with a maintenance plan to help with the scale. Here at DTS we have tree health care specialists with extensive knowledge of the scale problem, and what it takes to help minimize the frustration, and dealing with the mess from annoying critters.”