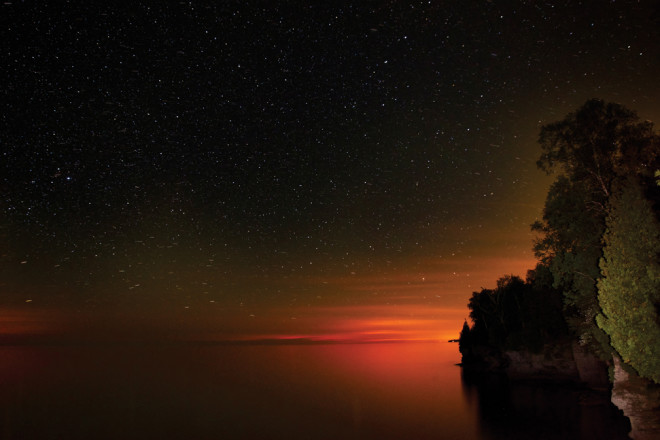 As early man attempted to understand the natural world around him, he looked up at the vast sky and wondered…

The sky was fraught with so much meaning that eventually it became the “heavens,” home of various deities. The night sky especially offered endless mystery and possibilities to our ancestors. They saw celestial occurrences as signs and searched for meaning in star groupings. 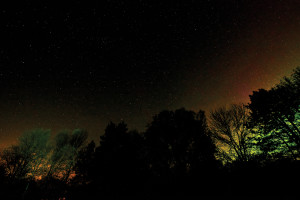 The Egyptians are credited with first naming star groupings – or constellations – but who knows where they got it. Greeks renamed the constellations to fit their own cosmology (for example, the Egyptians’ Osiris became Orion to the Greeks).

“Well there are 88 named constellations, 44 of them in the northern hemisphere. We know a dozen of them because of the signs of the zodiac. As you become familiar with a couple of things, it’s like a landmark,” said Dave Udell, president of the Door Peninsula Astronomical Society (DPAS).

But those groupings and their names are not written in stone, Udell points out.

“The way I look at it, before television and radios and internet and all these distractions, people looked at the night sky and told these stories,” he said.

He mentions a stargazer from Minnesota who spoke at a meeting of the Door Peninsula Astronomical Society and talked about creating new myths for constellations.

“The constellation Cepheus was named by ancient Greeks for a King (of Ethiopia), but now we can call it Elvis and create our own myths,” Udell said. “Now we can look at it and see different things ourselves.”

So, if you want to look and imagine at a particular star grouping this summer, Udell and fellow DPAS member and retired astronomy/physics professor Ray Stonecipher advise that you look in the same general direction that NASA’s Kepler mission is focused during a three-and-a-half year search for Earth-size planets around other stars:

“There is a summer triangle of stars in three constellations,” Stonecipher said.

The three constellations he refers to are Cygnus (swan), Lyra (harp) and Aquila. Each constellation contains a bright star – Deneb in Cygnus, Vega in Lyra and Altair in Aquila – that appear as a triangle in the summer sky.

“They are the three brightest stars,” Udell added. “They come out early in the evening. It’s easy to get that orientation. You get the summer triangle. From there, you can then make out the three constellations that are part of that triangle.”

“The other interesting thing,” Stonecipher added, “There’s a star about halfway down the body of Cygnus that’s called X1. It’s one of the first black holes ever discovered. It’s a star you see, but there’s a black hole associated with it.”

Look for the summer triangle of Altair, Deneb and Vega almost directly overhead at midnight. 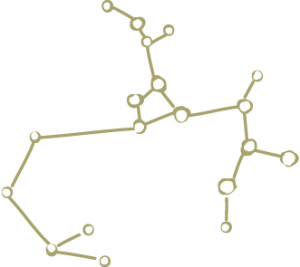 Sagittarius is a centaur – the torso of a man atop the body of a horse. Sagittarius is aiming his giant bow at his neighbor, Scorpius. While this is a large constellation, its stars are relatively faint and most people easily recognize just the central figure, which resembles a teapot.

More than a dozen objects reside in Sagittarius. Recently, astronomers discovered a small galaxy in Sagittarius that is crashing through the Milky Way.

Exactly who is Sagittarius? Greek mythology associates Sagittarius with Crotus, the son of the goat-god Pan and Eupheme, the nurse of the Muses. He grew to be a skilled hunter, as well as a man with an artistic soul. The Muses, with whom he was raised, begged Zeus to honor him with a constellation equal to his great talents. 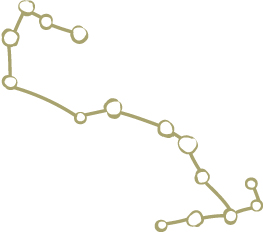 More than any other constellation, Scorpius resembles its given name. If you live in the northern hemisphere of the Earth, Scorpius crawls across the southern sky, close to the horizon. The bright star Antares marks the heart of the arachnid, and its long curving tail trails to the south.

Where stars are concerned, whatever you are looking for, you can probably find it in Scorpius. Antares is an unmistakable, brilliant red supergiant star at the heart of the scorpion. One of the largest, brightest globular clusters in the sky is in Scorpius.

To the ancient Greeks, the constellation Scorpius was the image of a scorpion. The constellation was related to the death of the hunter Orion. There are several different stories about Orion’s death. According to one story, Orion wanted to kill all the earth’s wild animals. However, the earth goddess Gaia was not pleased with Orion’s intention. So, she sent a giant scorpion to attack Orion. No matter how hard he tried, Orion could not defeat the scorpion. When he tried to escape, the scorpion stung him to death with its poisonous tail. As a reward for its service, Gaia placed the scorpion’s image in the nighttime sky. To this day, it looks as if the scorpion is always chasing after Orion in the nighttime sky. 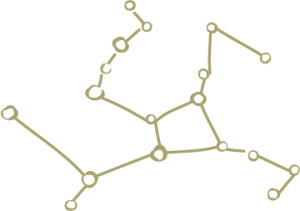 Hercules, the great Greek warrior, first becomes visible in the east in April, and works his way high across the night sky through October. Four relatively bright stars form what is commonly known as the Keystone. Hercules’ arms and legs extend from this central square.

By far the most exciting object to see in Hercules is the magnificent globular cluster M13, which is visible in dark night skies even without binoculars or a telescope. This cluster of 300,000 stars appears as a faint fuzzy spot to the naked eye. It is located between the stars that form the western side of the Keystone. 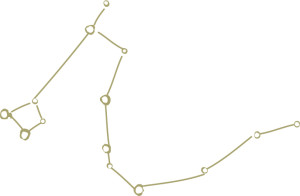 Draco the dragon is a circumpolar constellation, which means it revolves around the North Pole. It can be seen all year round in the Northern Hemisphere.

The easiest way to spot Draco is by finding his head. It consists of four stars in a trapezoid, burning brightly just north of Hercules. From there, the tail slithers through the sky, ending between the Big and Little Dippers.

Many myths revolve around this chaotic dragon. It is said in Greek myth that a serpent named Ladon guarded the golden apple tree. One of the 12 labors of Hercules was to steal apples from this well-guarded tree. 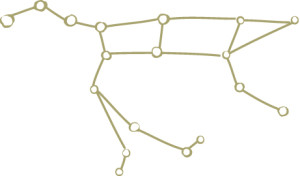 Ursa Major is probably the most famous constellation, with the exception of Orion. Also known as the Great Bear, it has a companion called Ursa Minor, or Little Bear. The body and tail of the bear make up what is known as the Big Dipper.

Ursa Major is full of unique celestial objects. Two of the stars, Dubhe and Merak, are pointer stars. If you are looking at the Big Dipper, the outer edge stars that make up the “bowl” of the dipper are the two stars, with Merak being the one on top. Connect a line between the two, and extend it north a distance about five times the distance between them. It will connect with the North Star, Polaris.

Several different cultures saw a big bear in the sky. The ancient Greeks had a few different stories to explain how the animal ended up there. In one story, Hera discovered Zeus was having an affair with Callisto and turned her into a bear. Zeus put her in the sky along with her son, Arcas, who became the Little Bear. 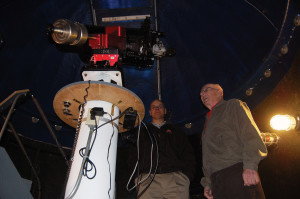 The Mission:  Promoting the science and public education of astronomy, encouraging observational participation in astronomy, and providing outreach for the Leif Everson Observatory.

DPAS meets monthly on the first Tuesday of the month at the Ray and Ruthie Stonecipher Astronomy Center. DPAS operates and maintains the Leif Everson Observatory, which is equipped with a 14-inch Schmidt-Cassegrain Telescope on a state-of-the-art robotic mount, a weather station and a budding project in radio astronomy. On a portable mount is a 102mm refractor with a hydrogen alpha filter for studying details of activity on the sun.

The Star Garden at the observatory is used for viewing the sky with unaided vision, binoculars and members’ telescopes. Binocular mounts are also set in concrete, which allow people of various heights to share the same view.

Between the observatory and Crossroads at Big Creek (just down the hill), there is a scale system of the solar system, with plaques representing the planets. Each plaque has details of that particular celestial body.

In 2012 DPAS teamed with Leadership Door County, which was looking for a community project, to create an analemmatic sundial, which uses a person’s shadow to tell the time.

In October the DPAS holds an astronomy day for kids, which includes hands-on activities and a viewing night at the observatory. 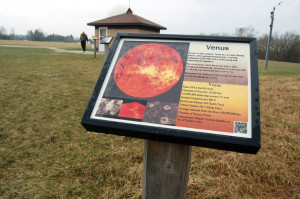 For more information or to join, visit the society’s website at doorastronomy.org.

When the sun goes down, the lights go on, and sometimes the night sky disappears.

“One of the things we struggle with here in Sturgeon Bay, between the shipyard and other things, we call it the Sturgeon Bay Nebula. It creates so much light, it makes it difficult to see at night,” said Dave Udell, president of the Door Peninsula Astronomical Society, an organization that has learned to accept and/or adapt to many distractions in viewing the night sky from Door County, not the least of which is the weather that happens when you view from a finger of land jutting into a Great Lake.

But light pollution is the bane of all night sky observers.

Sitting at the bank of computers in the Leif Everson Observatory in Sturgeon Bay, Udell and fellow DPAS member Ray Stonecipher call up a satellite’s view of Door County at night.

“The bayside is getting bad. You can see that,” Stonecipher said as he points out the bursts of light that pop up all along the more populated side of the peninsula.

“So many kids today growing up, especially in metropolitan areas, if they see a couple of stars, they’ve had a good night,” Udell said. “Here, we have a wonderful view of the night sky. It would be a shame to lose that just to keep the boogieman away.”

Stonecipher worked with then-village president Nancy Fisher to draw up a dark-sky ordinance for the Village of Egg Harbor, which went into effect in 2008. The ordinance was prompted, says Village Administrator Josh Van Lieshout, by “one or two houses that were lit up like prison camps.”

“Everyone was unanimous that it was a good idea to see the night sky,” he said.

The village modeled its ordinance on one used in Martha’s Vineyard, but with modifications to make it easier for homeowners to comply. For example, instead of requiring home and business owners to become experts in lumens and foot candles, the Egg Harbor ordinance limits wattage. The code calls for “The total exterior wattage of all exterior fixtures may not exceed three hundred (300) watts per parcel.”

Van Lieshout said the ordinance has been an effective tool, especially with public parking lots and the 2010 renovation of the village marina.

While that is a promising development, both Udell and Stonecipher say a good deal more light pollution education is needed.

“One of the things we talked about at our last board meeting is getting involved with the builders,” Udell said. “Do a home show, set up a booth and inform people. Think about this as you’re making your plans.”

Stonecipher recommends the International Dark-Sky Association for anyone who wants to know more about legislating light pollution.

“They have a model ordinance that they put together,” he said. “It’s very carefully done to really take care of the little problems.”

Visit the Dark-Sky Association at darksky.org