Mariah Goode, then acting as a consultant to the Town of Baileys Harbor on their Comprehensive Plan, instructs the town that it still needs to set the boundaries of the core area.

A joint town board and plan commission meeting includes discussion of expanding the core area from County E to County Q, including two 40-acre parcels owned by the McArdle Trust between County E and Summit Road. Discussion suggests a larger setback at the entrances to town. No official action is taken to adopt the boundaries of the core.

The town board is reminded that it never officially adopted the boundaries discussed in December of 2005. An official motion is made to extend the boundaries of the core area from County E to County Q, as per discussion of December 2005. Town Chairman James Parent abstains from the vote because his father’s recently purchased property is included in the extension. Motion passes, but the town never records the change with the Door County Planning Department for inclusion in its official zoning maps.

Citizens raise questions about the expansion of the core district in advance of open house sessions for the Door County Planning Department to gather public input on its 2030 County Comprehensive Plan in August and September.

At a meeting of the Door County Board of Supervisors’ Resource Planning Committee (RPC), the RPC denies the town’s request to expand the town core, telling the town that it should have gone through the statutory procedures for amending the town’s comprehensive plan before voting on the extension in March.

Baileys Harbor reviews the core extension again. James Parent recuses himself from the board during discussion.

James Parent recuses himself from a joint meeting of the town board and plan commission during which Joe Parent presents an initial plan for an assisted living center on the property he owns between County E and Summit Road. Meeting ends with decision to bring consultant Jeffrey Sanders back to the town to discuss the parameters for an image corridor that would buffer the view along an expanded town core. Town Clerk Doug Smith says that meeting will take place after Thanksgiving. 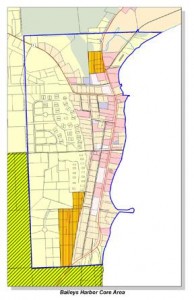 The Baileys Harbor Town Core as it is drawn today.

Town posts a notice for a November 23 joint meeting of the town board and plan commission to “End testimony and make final decisions on Town Core extension and Future Land Use Map.” Meeting is canceled the next day after it’s confirmed that citizens were told no meeting would take place until after Thanksgiving.

Signs are placed by unidentified persons on properties throughout Baileys Harbor labeling the boundaries of the town core and labeling certain businesses as “new growth.” A sign on the property owned by Joseph Parent Enterprises asks “What is smart growth?”

A meeting scheduled to end testimony and make a final decision on the town core, as well as outline details of an image corridor, takes a different turn. James Parent recommends the issue be taken to an advisory referendum in April. No discussion on the topic occurs. 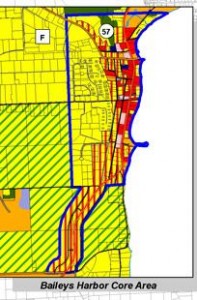 This map from consultant Jeffrey Sanders presented Nov. 9 proposes that the core be extended south along Hwy 57 out of Baileys Harbor to Cty E.

Plan commission votes to recommend to the town board that it place a referendum question about the core extension on the April 5 ballot.