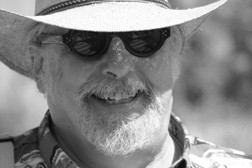 Timm has written in many poetic forms though he has probably been most influenced by his experience reading and acting Shakespeare and Ibsen. As a result, these days he writes plays, narratives, meditations, character sketches, as well as soliloquies and other rhymed poems.

Timm has had a life-long fascination with the written word. He wrote drama criticism and edited a college literary magazine. Playwriting earned him a fellowship to Brandeis University.

He stayed on in Boston where he became a founding producer of the New England Playwright’s Guild. Upon returning to Wisconsin he founded the Midwest Institute for Theater Arts. Through the N. E. Playwright’s Guild, Dancing Moon Theater, Teatro Caravaggio and other producing organizations, his plays have seen production in New England, New York City, the Midwest and elsewhere.

Most recently, he, Nancy Rafal and Garrett Cohn joined forces to publish N.E.W. Voices, a literary magazine providing a platform for regional writers.

The Dickinson Poetry Series presents the works of a recognized local or regional poet on the second Wednesday of each month. Following the featured poet, others in the audience are invited to read their works. The series is free, open to the public and provides a welcoming format for poets of all levels.