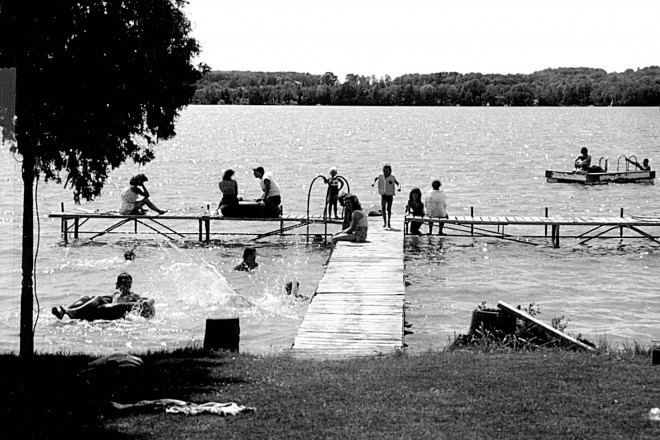 The children and grandchildren of Wilmer and Mary Ellen Anschutz enjoy the dock Wil built.

I couldn’t have imagined, when we found an old cottage we loved on Kangaroo Lake 16 years ago, that the history of this place and its people would lay claim to my life for nearly a decade. When our neighbor, Wil Anschutz, learned that I am a writer, he suggested that I research a history of the lake. At that point in 1994, we had spent only a few weeks, spread over three summers, at the lake. I had recently retired from a full-time job, was busy with a variety of free-lance writing assignments, and wasn’t eager to tackle another major project. But Wil, a lifelong resident of the area, was persistent. By the next summer, he’d prepared a detailed list of “old-timers” to interview and things to ask them about.

Mostly because I didn’t want to disappoint Wil, I agreed to talk with his father-in-law, Jim Finley, then 90 years old. By the end of that first interview, I was hooked. During the summers of 1995 and 1996, as I continued to tape the memories of Jim and his twin sisters, Mary and Catherine Collins, the lake as it was at the beginning of the 20th century came to life for me, and its oral history began to take written form…

Even today, the woods around Kangaroo Lake are home to deer, coyotes, foxes, a rumored wolf. It must have been a wonderful hunting ground centuries ago, when the two largest Native American villages in the state were at the mouths of nearby Heins and Hibbard creeks. It would be interesting to know what the Native Americans called the 1,200-acre lake, separated from Lake Michigan 5,000 years ago, when the glaciers receded. On the U.S. Surveyor General’s 1836 map of Baileys Harbor, it was identified as Cangaroo. (It does, indeed, resemble that animal!) The correct spelling became permanent about 1900.

Allen G. Powers, unemployed after early stone and lumber businesses in Baileys Harbor failed in 1852, made the first clearing on Kangaroo Lake and lived there as a hermit for many years. By the 1880s, others arrived – mostly Irish and German farmers – and their children needed a school. For $15, Ann T. Griffin sold one-half acre of her land on the northeast corner of Highway E and Logerquist Road to School District No. 2 in Baileys Harbor. Among the names on the roll were Petersons, Gerdmans, Krishkas, Krauses, Bergers, Collins, Stephans, Krowases, Mannys and Copiskeys.

To get to market in the early days, farmers drove from a point near Highway E and Maple Road, through ankle-deep water over a gravel bar that could support a horse and wagon, connecting with Summit Road in Baileys Harbor. The original one-way causeway across the lake was a “corduroy road,” built in the 1880s by piling cedar logs up from the lake bottom and covering the top with gravel. A rustic log fence lined the sides. Those wishing to cross hollered to the other end to make sure no one was headed toward them. At night, someone had to walk ahead with a lantern.

The Faust/Candioto family has one of the longest and best-documented histories on Kangaroo Lake. They’ve owned their property on the north end since 1882, when the original section of their farmhouse was built. Six generations have occupied the home in the past 126 years. When Carol Schmidt, the current resident, remodeled it, she found newspaper “insulation” dated from 1882 to 1888 – and she stripped 25 pounds of paint from the walls of one bedroom. The family has a wonderful story about the horse that “raced for dear life” to carry family members in their buggy to safety across the railroad bridge in Sturgeon Bay when they were surprised by an oncoming train. Before the construction of the dam at the south end of the lake in the 1930s, Kangaroo Lake drained into Heins Creek, then a sizable, sometimes-navigable waterway. Not everyone was happy when the dam raised the level of Kangaroo Lake. The Candiotos’ cranberry marsh was inundated.

The late Jim Finley remembered his first trip to Kangaroo Lake in 1915, when he was 11 years old. He and his father came by train from Chicago, and were met in Sturgeon Bay in a 1914 Ford touring car. They stayed at Evergreen Camp, the first resort on the lake, owned by Mag Wilson, whose husband was the captain of one of the Goodrich Line’s steamships.

Jim recalled with glee the time some male guests from Chicago, after a night in a Baileys Harbor tavern – now the Harbor Fish Market and Grille – thought it would be fun to borrow the tavern’s stuffed bear and set it up near the women’s outhouse at Evergreen Camp. When a group of schoolteachers went out after dark, the light from their lantern shone off the glass eyes of the bear, and the terrified ladies tore back up the path screaming, “Jesus, Mary and Joseph, just let me make it to the door! There’s a bear by the outhouse!”

In 1919, the grandfather of our neighbor, Tom Goss, sold Finley’s dad five 100-foot lots on the east side of the lake. The price – $2.50 a lakefront foot! Land away from the water cost more, because it wasn’t so cold in the winter!

Finley’s twin sisters, the late Mary and Catherine Collins, remembered being rowed across the lake as teenagers to pick cherries at the Messer Orchards. They earned 25 cents a pail and worked until they’d earned enough to buy new fall hats. Nearly all the kids on the lake picked cherries, along with many Native Americans, seasonal workers who slept in farmers’ barns.

Echo Island in the middle of the lake was uninhabited until 1923, when the three Stromberg brothers from Sweden, who owned a car dealership in Chicago, purchased it from the Gerdmans for $1,500. The vacation home they built remained in the family for 71 years.

In 1925 George Messer sold property on the east side of the lake to the Miller family, from Chicago, to build East Shorewood Cottages. In the early years, the furnished cottages, including blankets, rowboats and firewood, rented for $17.50 to $47.50 per week.

Dodie Miller Doyle, who was a young girl then, recalls rides in “Tin Lizzies,” kerosene cooking stoves, and amateur productions at Schram’s Hall in Baileys Harbor. She remembers riding her bicycle to the Baileys Harbor Post Office during the gas shortage in 1933 – a chore she welcomed, as it gave her a chance to check out the caddies at Maxwelton Braes. She remembers lots of good times at Baileys Harbor teen hangouts – Wasserback’s, a dance hall and ice cream parlor, and Panter’s, a hotel with a dance floor. She also recalls places she didn’t frequent – Baileys Harbor, with a population of 600, had seven saloons!

Wil Anschutz, who grew up to marry Jim Finley’s daughter, lived on a dairy farm on the corner of highways E and A, now the site of Stone’s Throw Winery. He recalled that his dad’s hired men used to walk to Kangaroo Lake with yokes on their shoulders holding buckets to bring back water for the cattle. Farmers who lived closer to the lake brought their cows and horses to the lake to drink, and Wil remembers swimming in the lake beside the livestock.

Krueger’s on Kangaroo, now the Coyote Roadhouse, was the first gathering place on the lake. Mary Ellen Krueger Krejci remembers that the main building was moved from Peninsula State Park, where it had been a bar. The favorite item on the menu was a “kangaroo burger.”

The early residents of Eggers Point, across from Krueger’s, were mostly doctors’ families from St. Louis. They gathered on Sunday evenings to share their leftovers from the week in an outdoor dinner, with each family bringing its hired girl to help serve the meal. Attire was formal – white aprons and caps for the hired girls, long white dresses for the women and, for the men, the three-piece suits they also wore fishing.

Ice cutting used to be a big business on the lake. It could be no more than 20 inches thick so the machine built by Oswald Kalms could cut through it. Workers were paid $2 a day. The ice cakes were sold for four cents each to Otto Voeks’ grocery, to Miss Emma Toft’s resort on Toft’s Point and to Washichek’s Store, now the site of PC Junction restaurant at highways E and A.

The original homes were built by hand because there was no electricity on some parts of the lake until the late 1960s. The Schoof family’s first cottage was put up in a weekend in the early 1920s and christened “The Shack.” It’s still used today by Marian Schoof Bezold, whose late husband referred to it as “that wooden tent.”

The early years of Kangaroo Lake families were filled with simple pleasures – playing charades, listening to the gramophone. Paul Mahlberg remembers the concrete box his family sank in the ground to keep food cool. Bob and Walter Schoof recall climbing a fence and walking through an alfalfa field to fetch buckets of drinking water for their family. Dorothy Merriman did all the cooking for her family on a griddle in the fireplace. It would hold 12 eggs or a pound of bacon, and a pitchfork was perfect for making three pieces of toast. Many of the husbands worked in Chicago or Milwaukee and came to the lake only on weekends. If a family ran out of groceries, they sent a penny postcard to Voeks’ Grocery, and the food was delivered the next day. Laundry was rinsed in the lake, which also served as a bathtub.

Most of the memories of early residents are happy, but some are heart wrenching. Jim Finley, interviewed when he was past 90, remembered waiting years until he could afford to marry his sweetheart, Adelaide Collins, and losing her just under a year later, within days of the birth of their daughter, Mary Ellen, who grew up to marry Wil Anschutz. Decades after Addie’s death, Jim whispered, “I’ve never gotten over it.”

We’re the 17th owners of our little corner of Kangaroo Lake. In the past 16 years, five generations of our family from two weeks old to late 80s have enjoyed it. My only regret is that we missed all the fun in the early 1900s. And that’s why the sign on my office, a former boathouse and bait shop, says, “I wasn’t born in Door County, but I got here as quick as I could.”

Patty Williamson is the author of A History of Kangaroo Lake, a book with memories of 112 lake families. It’s now in its third printing.