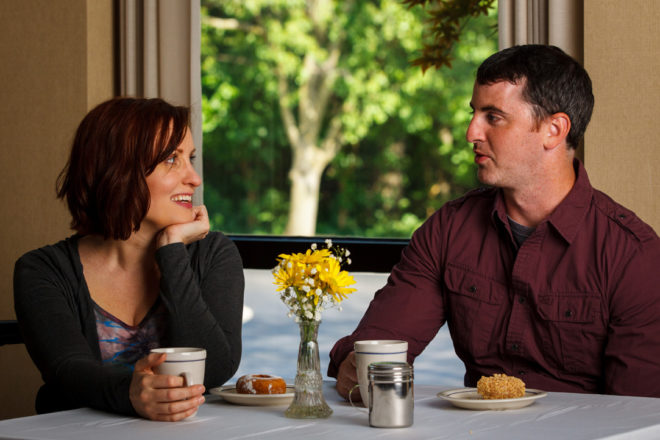 Erin Noel Grennan as Joy and Doogin Brown as Jack in “The Tin Woman.” Photo by Guy Rhodes.

On July 16, Theatre at the Center (TATC) in Munster, Indiana presented the Chicagoland premiere of Sean Grennan’s play The Tin Woman, starring Erin Noel Grennan in the lead role. Inspired by a true story, it’s a heartwarming comedy that’s a beautiful blend of family, humor and hope. Joy has had a heart transplant and is questioning her second chance in life. When she connects with the family of her donor, together they learn what it means to truly give one’s heart.

Erin Noel Grennan originated the role of Joy in the world premiere of The Tin Woman in 2014 at Peninsula Players in Fish Creek.

The idea for The Tin Woman was born when Sean’s sister, actress Erin Grennan, brought him a newspaper clipping she’d saved for years. It was a story about a woman who had received a heart transplant and her eventual meeting with the donor’s family. The Tin Woman uses humor and pathos to explore loss, family and what it means to be given new life.

The Tin Woman was first produced in 2014 by Peninsula Players Theatre in Fish Creek with his actress sister Erin Noel Grennan cast in the lead role as heart transplant recipient Joy.