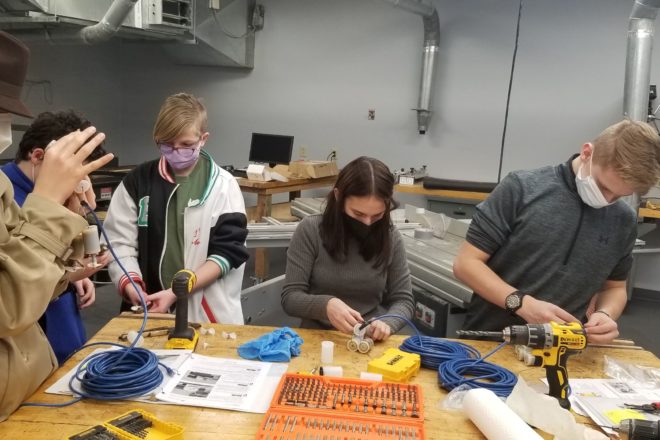 Four students from one of Wisconsin’s tiniest schools can forever say that their underwater robot finished 14th in a world competition.

After finishing first in the state in a challenge to engineer, build and operate the best remotely operated vehicle (ROV), a Washington Island middle school squad this month finished among the top 6% of all teams at the world SeaPerch competition at the University of Maryland.

“A small, small school on an island in Wisconsin held their own against teams from around the world,” Principal Michelle Kanipes said.

Members of Team Dory – Magnus Purinton, Julia Pratt, Collin Verboomen and Allison Bennett – spent much of the year designing, building, testing, recalculating and making corrections and additions to their ROV.

“It’s not just build it, play with it and compete with it,” said Miranda Dahlke, Washington Island SeaPerch coach and STEM (science, technology, engineering and math) program leader. “They have to be able to speak about it to judges. They have to talk about the engineering and design process, the struggles they had and how they solved problems.”

Washington Island had five teams this year, and at local and regional competitions, they had to give presentations in addition to driving their ROV through courses. At the world competition, they also had to submit a thorough, written engineering report on their designs and changes, times and performance in testing and competition.

It was Pratt’s third year in local and regional competitions. The previous year, she was on a team that built a small unit that was not quite ideal.

“It could go fast, but it couldn’t pick up anything,” she said.

This year, she and her teammates built a slightly larger, stronger ROV that moved a bit more slowly than the 2021 model, but they were able to steer it accurately through underwater hoops and obstacles.

They also added an appendage with a hook on it so that it could handle tasks for this competition that are similar to what NASA’s remote-controlled robots must perform in space. The robot had to achieve underwater tasks such as unhooking latches, pulling wires, picking things up and placing them onto platforms, and removing and replacing batteries.

Dahlke said she expects team members to make their own decisions, and Pratt said she was surprised by how well she and her teammates worked together. Members of Team Dory eventually came to a consensus that Pratt would drive the ROV through the obstacle course and Purinton would navigate the mission course. Dahlke described Purinton as an avid gamer who could handle the controllers with ease and skill.

Pratt said she’s looking forward to competing as an eighth-grader, and perhaps after that.

“I love doing this, and I hope maybe there might be a high school program for us,” she said.

In addition to meeting people and competing, Pratt said she’s gained many skills: learning how to measure and cut PVC pipe, for example, and how to assemble an ROV using fittings and elbows. She’s gained electrical knowledge, too.

“My first year, I learned to solder, and before then, I didn’t even know soldering was a thing,” Pratt said.

The Door County Maritime Museum sponsors the SeaPerch ROV program and local competitions, and staff members provide support and acquire materials for any schools that participate.

Sevastopol participated this year, and many more area schools had teams in 2019, prior to the pandemic. The U.S. Coast Guard station has provided assistance, and Dahlke said local electrician Steve Hopkins provided lessons and guidance to the Washington Island students.

Districts worldwide work to integrate science, technology, engineering and math (STEM) lessons across the curriculum, and many incorporate the arts for STEAM programming. Kanipes found out about the SeaPerch program four years ago and said it’s good for the kids.

“They create, they design, they build,” she said.

They must also rebuild, test and rework until they have as perfect of a device as possible. All the while, they’re gaining technical, electrical, engineering, physics and mechanical skills; applying mathematical skills by measuring and making calculations and estimates; and learning about buoyancy, Dahlke said.

They also gained life experiences, such as spending part of a day at the National Archives and at monuments in Washington, D.C. Although students from China competed remotely, the Washington Island students met peers from the mainland United States, Hawaii, Puerto Rico, India and some others who traveled from halfway around the world.

Pratt said she and her teammates spent quite a bit of time with the kids from New Zealand, and those students even gave them gifts. Her team is trying to stay in contact with that team.

“They’ve grown a lot, especially going off the island to competitions with other schools,” Dahlke said. “They were so excited to meet other teams and become friends with a team from New Zealand.”