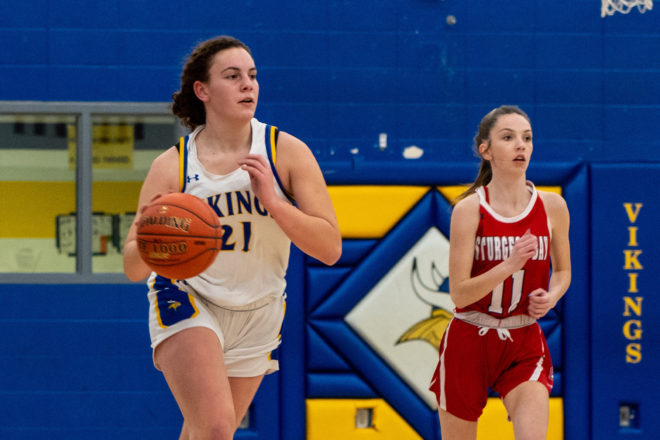 The Pioneers finished 18-8 last year, with the most wins in school history, and placed fourth in the Packerland Conference at 10-6 in conference play, where they beat league runner-up Kewaunee for the first time in 15 years.

Ben Rikkola said the team’s strengths include discipline, experience, scrappy defense and a willingness to invest in the team concept, while he rates the team’s size and physicality as weaknesses.

Ben Rikkola said he’s looking forward this season to “teaching student-athletes to be brave and go for it in life – not to sit around and wait for something good to happen, but to learn to go out and make it happen.”

The Vikings aim to bounce back from last season’s 1-24 finish, and they return all but one player from last year’s team.

“We had seven athletes earn varsity letters for the first time last year,” coach Devin Thomas said. “We gained a lot of experience last year, and we hope to build on that experience, returning every starter from last year and eight players in total from the varsity team.”

“We look to carry that through to this year as we get into rhythm offensively,” he said. “We have a very versatile group of athletes who can play multiple positions.”

Thomas said the team needs to work on “consistent scoring to start the year, the ability to handle pressure in the back court and efficiency shooting from the outside.”

He said the Vikings’ goals this season include being able to “work more as a unit offensively and defensively by communicating and hustling to everything.”

“If we can do this consistently,” Thomas said, “then we hope that it will translate to an improved record and conference standing from last year, as well as getting further in the playoffs.”

Thomas said he’s most concerned this season about the health of the team, “as well as keeping the girls positive and lifted through the grind of the season,” and he’s looking forward to the Vikings’ continued growth.

“We have great numbers out for the team this year and are excited to see them grow throughout the season and accomplish the goals that we have set for ourselves,” he said.

The Clippers are coming off a two-win season, when their only conference victory came against Gibraltar. Casey Harrington returns for his second year as head coach.

Harrington said the team’s strengths this year include speed, transition ability and competitive level, while size and shooting are weaknesses.

He said he’s most concerned this season with overall numbers and staying healthy, and he’s looking forward to the individual growth and development of the players.

“Every opponent is tough,” Harrington said. “We are more concerned about playing our game from the tip-off to the final whistle.”

Andy Bruess, who was previously a boys varsity coach for 15 years at Mosinee, takes over an Eagles team that went 6-19 overall and 5-11 in conference play last season.

Bruess said work ethic, teamwork and experience are strengths this season, while learning a new system and staying healthy are concerns.

He said the team’s goals include improving every day, limiting turnovers and being competitive every night.