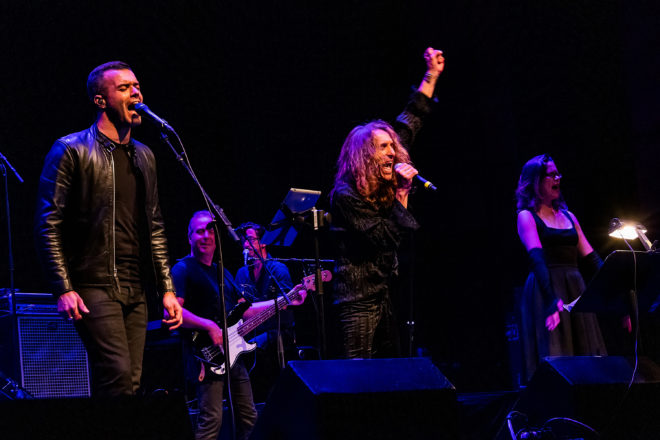 Classic Albums Live: Queen – “A Night at the Opera”, at the Door Community Auditorium in Fish Creek. Photo by Len Villano.

I never got Queen. I thought “Bohemian Rhapsody” was an interesting novelty song, but still just a notch above cowboy actor Sheb Wooley’s 1958 No. 1 Billboard pop hit, “The Purple People Eater.”

I didn’t know anyone who was a Queen fan. The only Queen I knew was what might have played on the radio. In fact, until very recently, I had never heard its iconic fourth record, A Night at the Opera.

A few years ago when I bought a barnful of vinyl records from the late 1940s through the mid 1980s, there were several Queen albums in the 28 plastic bins of music. A Night at the Opera was not among them. All later stuff, I think. I tried listening. I just didn’t get it. Too histrionic. And when Freddie Mercury sang about his woman, I wasn’t buying it.

Which all leads up to the great Queen tribute band that played at the Door Community Auditorium July 3, performing A Night at the Opera “note for note, cut for cut,” as Classic Albums Live – the organization that put the production together – says on its website.

I wondered how in the world an album that was so studio-based, recorded on 24-track tape and with dense overdubbing – which caused it to be the most expensive record ever made at the time – could be recreated live on stage.

It appears that if you have enough great musicians on stage, you can pull off anything.

As the name states, Classic Albums Live specializes in live recreations of classic recordings, from early Beatles to AC/DC’s and Amy Winehouse’s Back in Black. The only way to pull that off is with top-notch musicians.

Lead singer Phil Naro (philnaro.com) was the star of the show. He also takes the Robert Plant role in the production of Led Zeppelin II and Roger Daltrey in Who’s Next. The guy’s got some pipes! He also has a number of his own projects, including The Platinum Rock All Stars, which includes the great Vanilla Fudge drummer Carmine Appice and Gene Cornish of The Rascals.

The rest of the band members – three electric guitarists, a male singer and sometimes acoustic guitarist, two female vocalists, a bassist, a keyboardist and a drummer – sounded great. I appreciated that some of the more English-music-hall elements in several of the songs on the original record were tamped down.

After performing the promised album, the band launched into a second half that included other Queen songs, including the expected ones such as “Somebody to Love,” “We Are the Champions,” We Will Rock You,” “Fat Bottomed Girls” and “Crazy Little Thing Called Love.” One young fan at the show was disappointed that the group didn’t do “Killer Queen,” but there were several transcendent musical moments that made the second half the star of the show.