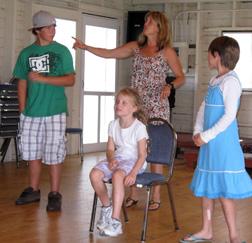 Those of us who live on Washington Island know very well that there are two major seasons in the year – the one that celebrates visitors and summer residents enjoying our beautiful island, and the other one that we have to ourselves. This is not to say that we don’t have a very active life during the quiet months, and there are events that often draw off-islanders to our island, but we still have two very distinct seasons, much more so than the Door Peninsula. By mid-winter, there are only two ferries a day to and from the island.

From Memorial Day weekend to Columbus Day weekend, we are “open for business” to our visitors and summer residents. Everyone enters into an almost euphoric time when there are more events to enjoy, more culinary delights to experience, and more classes to attend than we can possible take in. Then, at the end of the Columbus Day weekend, when the final ferry leaves, we Islanders breathe a sigh, whisper “thanks for coming, see you next year,” and take back the island to ourselves.

Island Players, our own community theatre serving the island since 1984, has taken on the challenge of bringing quality theatre experiences to our young people who live her year-round as well as those young people who are here for a brief time during the season of tourists and summer residents.

During the school year, Carissa Mann, Island Players’ Director of Dramatic Arts in Education, visits the elementary and middle school classes weekly. Mann’s goal, as she explains it, is to help the children become “comfortable with their surroundings and peers, comfortable and self-confident as speakers.” During the time she is with them, she lets them know that in drama class “it’s ok to let loose, to not care what other people think, to let their imagination take over.” Using “theatre games,” improvisation, and original writing, Mann has seen shy children become leaders of their class because of this freedom to explore creatively. 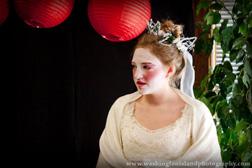 Lillie McDonald in the Island Player’s Drama Club production of “The Amazing Adventures of the Marvelous Monkey King.”

Mann also directs the after school Drama Club for the junior and senior high school students, giving them many opportunities to perform during the school year. “Center Stage,” Island Players’ winter program of monthly informal afternoons of plays readings, provides a stage for young people to perform in scenes with adults. One of the monthly “Center Stage” programs is dedicated entirely to performances by the students.

Last year, the Drama Club presented The Amazing Adventures of the Marvelous Monkey King by Elizabeth Wong. Their show had the distinction of being the first one performed by children. Previous, it had always been performed by adults for children.

Mann also takes the Drama Club to a live theater production each year. In 2009 they attended a production of Wicked in Appleton, and in the spring of 2010, they participated in a performers’ workshop of You’re a Good Man, Charlie Brown at St. Norbert College.

During the summer, Island Players provides a one-week Acting Camp, open to students from age 7 to 14. Directed by Jamie Ringsmuth, with assistance from Rylee Johnson, a graduate of our Drama program, the students participate in games and exercises that give them confidence and a better understanding of what is means to be an actor. Listening and speaking skills, teamwork and creativity help students become more comfortable on the stage. The week’s activity culminates in a public performance showcasing the work the students have done throughout the week.

Over the past few years, the camp has appealed more and more to children who are visiting the island during the summer. It has become a way to serve the summer youth in our community as well as those who live here year-round. 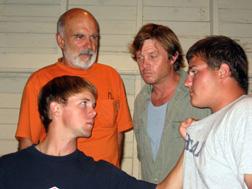 An additional way that Island Players has provided opportunities for young people to have quality theatrical experiences is through our major productions. Every year, we choose at least one show that offers the chance for our island youth to perform with adults or join the production crew.

This coming Labor Day Weekend, Island Players will present John Steinbeck’s Of Mice & Men. Three members of the cast are young people, two from our Washington Island School – one a senior boy, the other a girl recently graduated – and a young college boy living with his grandparents for the summer. Two boys from the island will be part of the “running crew” as well.

Island Players’ mission focuses on bringing to our community “quality theater experiences for both adults and youth.” We can add to that the goal of serving those who live on the island year-round and those who join us during the summer and fall, making our year’s mission complete.

For more information about Island Players, call 920.847.2215 or visit http://www.islandplayers.org.