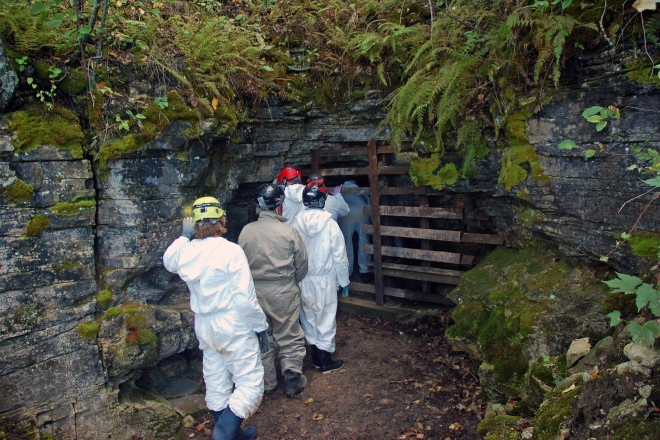 Millions of years of evolution took place between cave-dwelling Troglodytes and the 21st century human being, but some modern humans just can’t wait to get back into a cave.

When the Door County Parks Department announced it was giving tours of county-owned Horseshoe Bay Cave on Sept. 19 in one-hour slots from 9 am to 3 pm, with 10 people in each group, the allotted 70 slots filled up in a week and a half.

“So we added two more tours, at 4 and 5,” said Door County Parks Director Erik Aleson. “Those filled up and we still had about a 65-person waiting list going into the weekend.” 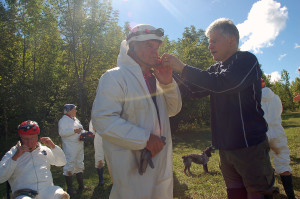 And several more who showed up for the tours without reservations on the day were also turned away, but not before being soundly and congenially informed about the cave by either Aleson or Door County Corporation Counsel Grant Thomas, who has taken a particular interest in the cave. Thomas and Bill Schuster, head of the county’s Soil and Water Conservation Dept., famously explored the cave for the county to take stock and assess potential as an addition to the Door County Parks system.

“I’m surprised at the interest. I hate turning them away,” Thomas said, adding what he had been telling people who showed up without a reservation, “You can go up and take a look [at the cave entrance], I’ll tell you what I know about it and we’ll put you on a waiting list.”

And when those politely rebuffed people left, they did so with good humor and better information about the cave than when they arrived. They also promised to return, and most signed up for future cave tours.

Thomas made it a family affair, with his wife, Heidi, helping to lead tours into the cave, and his son, Tyler, helping wherever needed.

Photos of the legendary Thomas-Schuster expedition were on display with other photos of the cave, and a map of the cave, showing its entire length and the names that have been given to its various parts – intriguing names such as Onyx Room, Elephant Room and Waterfall Room. However, Mud Tube and Mud Bank Room are not so intriguing.

What is the big attraction for modern man and woman to go back into caves?

“A lot of people are just curious about what it looks like in there. We’ve gotten a lot of good feedback,” Aleson said. But he makes a point to tell cave visitors in a pre-visit session that this is no Carlsbad Caverns. In fact, visitors were limited to the first 250 feet of the 3,000-foot cave because beyond that they would have had to don wetsuits.

Still, a 250-foot trip inside was a 45-minute experience. Aleson explained that to traverse the entire length of Wisconsin’s longest wild cave could be a 13-hour journey.

The previously mentioned cave map highlights another feature that may be an attraction for many – a chance to see bats in their native habitat.

“It’s the largest natural cave hibernaculum in the state,” Aleson said. “There are anywhere from 1,000 to 1,500 bats that hibernate there.”

That is why there will be no more public tours this year. The cave is 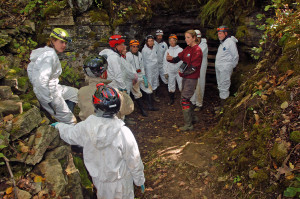 Jennifer Redell talks about the bats who inhabit Horseshoe Bay Cave before the group enters. Photo by Jim Lundstrom.

closed from Oct. 1 through May 15 to allow bats to hibernate undisturbed. In order to minimize the possibility of tour groups spreading the bat-fatal White-nose Syndrome, the first thing cave visitors must do is get outfitted in a county-provided jumpsuit, rubber boots, gloves and lighted helmets.

Bat ecologist Jennifer Redell, a cave and mine specialist with the Wisconsin Department of Natural Resources, was on hand for the tours. She has been an integral part of the process of making the cave a county park and opening it to the public. After a briefing by Parks Director Aleson on the history of the county cave and how the project to open to the public was done in conjunction with Horseshoe Bay Golf Club, and talking about the cave specifics and plans for the cave touring program, the groups were turned over to Redell for the actual cave tour (Aleson took over the tours after the noon group).

Redell brought each group up the rather steep path into a mossy, forested area, where, with the help of an electronic tablet, she talked about the geology of the cave, the bats and other critters that call the cave home and other salient cave details that only a cave specialist would know. She also pointed out that the visitors would see bats on the tour.

“Engaging” was a word heard several times in reference to her performance as a tour leader.

On the day before the public tours, Aleson, Redell and Thomas gave tours to more than 100 Door County students of all ages from Southern Door, Sturgeon Bay and St. Peter’s Lutheran.

What was the reaction?

“A lot of smiles and excitement, just like we’ve seen today,” Aleson said.

“Third and fourth graders were so interested,” Thomas said. “Jennifer was able to capture a bat and put it in her pocket and brought it out. The reaction of the high school kids was fear and repulsion, but the third and fourth graders, we had to hold them back because they wanted to go up and touch it.”

The subject of children was on the county’s mind in opening the cave to tours, and as one tour comes down the incline from the cave entrance, they are led by a young girl in a very big jumpsuit that she has to carry all bunched up as she walks. 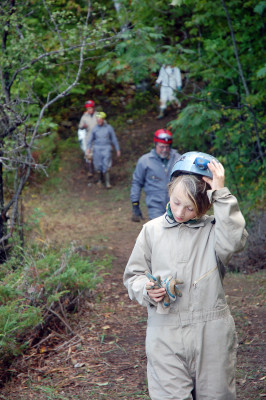 A tired caver after a tour. Photo by Jim Lundstrom.

“We didn’t know where the age cutoff was,” Thomas said. We put an age limit at 5, and she showed up at 3,” Thomas said, referring to the young girl in the expansive jumpsuit.

“We don’t know,” he continued. “I haven’t had a 3-year-old around my house in 19 years. Her parents said she could stick it out and she did. It all depends on the kid.”

He adds as an afterthought: “We’ll have to get some age-appropriate equipment.”

Aleson asks you to stay tuned for the 2016 tour schedule.

“We’re hoping starting next summer we can do June, July, August tours, and then focus the school tours during the fall and spring,” he said. “At some point as the program grows, we might be able to offer them more regularly. It all depends on staffing, volunteering and budgets. But I do think there’s enough interest.”