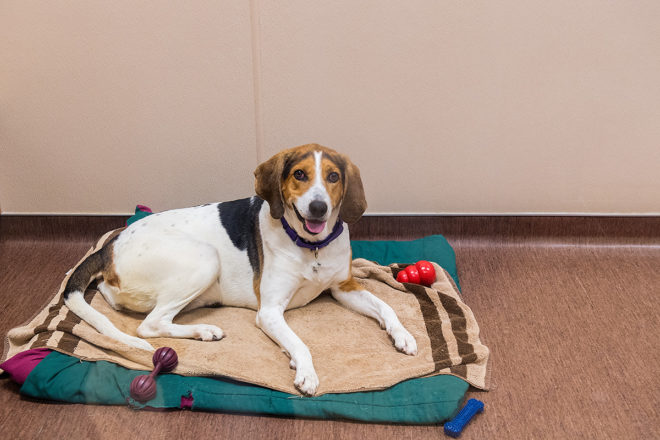 The late-winter rescue of a group of dogs from a South Korean dog-meat farm has suddenly boosted the dog population at the Wisconsin Humane Society Door County Campus to the highest it has ever been.

When two of the Korean rescues tested positive for canine brucellosis, a bacterial infection that is highly contagious among dogs, the shelters with the Korean rescues had to find temporary shelter for their local intake of found or surrendered dogs.

“It was clear to us that our Door County Campus – with its ample space, proper licensing and fantastic staff – was the best facility available to quickly address the need to safely monitor and care for dozens of dogs from multiple shelters,” said Anne Reed, president and CEO of the Wisconsin Humane Society. “We’re proud to be able to help our colleagues in this effort.”

“We’re currently caring for 25 dogs from the Humane Society of Sheboygan County and HAWS (Humane Animal Welfare Society) in Waukesha,” said Angela Speed, the Wisconsin Humane Society’s vice president of communications. “We do have a few other dogs that have come in as stray intakes or surrender intakes that are housed completely separately from the dogs under isolation. So it’s a big undertaking for our staff, who normally have four or five dogs in the building.”

The dogs arrived from the two other shelters last Friday and must remain in isolation for up to eight weeks, pending test results from the original group of dogs from Korea.

“None of the dogs that came to us have canine brucellosis that we are aware of. They were pretty much just animals caught in the crossfire in the shelter at the same time as other dogs that did,” Speed said. “And it’s not a Korean disease. Brucellosis is found in breeding operations in the U.S. that are substandard. It’s a rare disease, typically most common in substandard breeding operations. It’s passed through birthing fluids and tissue. It’s very hard for a dog to get it from another dog unless they’re breeding, and it’s very hard for a human to contract it, although it is possible.”

She said in the U.S. there have been only about 50 cases of dog-human infection since the 1960s, and those were limited to veterinarians and lab technicians.

“We’re really proud that we’re able to step up and help, and the Door County community should be proud that this facility exists to help animals outside the Door County lines,” Speed said. “It’s making a big impact. The gratitude we have received from our partner organizations has been overwhelming. They are able to resume normal operations sooner. This was the way we could help the most animals.”

But, of course, it put a strain on campus staff and volunteers.

“One of the challenges of all of a sudden having 25 dogs to care for – for six to eight weeks – is staffing,” Speed said. “We have been recruiting additional staff and volunteers from our other campuses. HAWS and Sheboygan have also sent out calls to their volunteers to take some shifts here in Door County. What’s really wonderful [is that] travel and hotel expenses are included from our partner organizations.”

It has also meant the shelter has had to put adoptions on hold for an undetermined time.

“We will be closed for adoptions the next few days to help the new arrivals settle in and to make sure our staff is comfortable with the daily cleaning and walking and new protocols, but we hope to resume [adoptions] soon,” Speed said. “We are open for intake of any surrendered animals. We can keep them safely isolated from the other group.”

The one exception to the adoption closure is several barn cats.

“We have a few barn cats looking for homes. Barn cats are not at all socialized with people. They cannot comfortably live indoors,” Speed said. “They’ve been spayed, neutered, tested. They are working cats and are looking for a job. If you know anybody who’s got a rodent problem in their barn, warehouse or outbuildings, we do have a few barn cats here who are awaiting placement.”

New protocols and procedures had to be adopted to care for the dogs that will be in isolation for up to two months.

“They’re getting three walks a day and enrichment,” Speed said. “There are dogs with behavior issues that we’re working through. Some who are food guarders or resources guarders who won’t share their toys. Some are not good with other dogs. So we’re still learning about each dog’s individual needs. We do have a few on behavior-modification programs, meaning they get extra training or time spent with them to make sure they don’t deteriorate in the shelter environment. As nice as the Door County campus is, a shelter environment is always more stressful than a home environment. Fortunately, we have a tremendous behavior staff and behavior resources to come up with programs for the animals. There are also two puppies who are eight or nine weeks old. You don’t want a puppy raised in a shelter, so there is a special puppy program they are going through to make sure they receive the proper socialization to grow into healthier dogs.”

And at the end of the isolation period?

“The goal of any animal shelter is to find a home for the animals,” Speed said. “They are still owned by the two other shelters, so most likely they will be returned for placement, but I wouldn’t be surprised if a few people here fell in love with the dogs. We’ll work on that issue when it comes up.”

Watch the WHS website for adoptions to resume at the Door County campus.

Putting an End to Dog-Meat Farms

Despite a growing effort to put an end to dog-meat farms in South Korea, as many as 1 million dogs are consumed annually in that country. Although a South Korean court ruled last June that killing dogs for meat is illegal, it did not make it illegal to eat dog meat.

“The practices going on there are pretty horrific,” said Angela Speed, the Wisconsin Humane Society vice president of communications. “Dogs overseas are farmed for meat, and these are companion animals. There’s a strong movement in Korea to have these farms shut down and have these farmers pursue other businesses. But there are not enough homes willing to adopt the animals in Korea, so the Humane Society International (HSI) is flying them to the Netherlands, Canada and the U.S.”

The HSI has been leading the charge in ending the dog-meat farms practice in South Korea and has shut down 14 such farms, most recently a puppy mill that was raising dogs both for food and as friends.

“Although HSI has found all sizes and breeds of dogs at its previous 13 dog-meat farm closures, this is the first time the charity has discovered a facility where puppies being born for the pet trade were being bred alongside others destined to be electrocuted and butchered for meat to supply local restaurants. Any pups unable to be sold as pets could also end up at the slaughterhouse,” HSI wrote in a statement about the February discovery.

“There has been some healthy debate in the community about helping dogs overseas versus helping dogs nationally, but you can do both,” Speed said. “But it’s really opened up an interesting conversation about helping animals outside our borders. A lot of animals have been saved.”

How You Can Help

With the largest population of dogs ever under its roof, the Wisconsin Humane Society Door County Campus could use a hand, or, more specifically, peanut butter.

“We expect these dogs to be in our care for about two months,” said Angela Speed, the Wisconsin Humane Society’s vice president of communications. “We are in dire need of dog toys because they love plush toys; dog treats; kongs, which are more durable toys; and also peanut butter. We go through a ton of peanut butter. A frozen peanut butter kong can keep them occupied for several hours and keeps them happier and healthier while they are with us.”