A blue-sky day with a gentle breeze, temperature in the upper 60s, Sulphur Butterflies and Wood Wasps constantly on the move – these are sure hints of fall. Goldenrods and Purple Asters add a delightful compliment of colors to this crisp day.

Our walk after an early breakfast, into the still-wet woods revealed what we had hoped to find, dozens of mushrooms. This is indeed the season when mycophagists, those who eat mushrooms, are getting psyched for the big hunts. They wait with great anticipation for their mushroom hikes to begin. 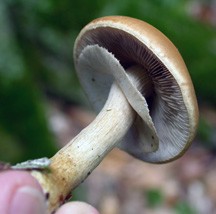 One of the parts of a mushroom is called a partial veil which initially covers the underside of the cap. When the cap expands the membrane breaks loose and may remain as a ring or “skirt” on the stalk.

Eastern Wisconsinites can expect a good autumn for houby (pronounced HOE-be; Bohemian for mushrooms). Rainfall has been plentiful, perfectly interspersed with short periods of dryness. Even though late July was relatively dry, resulting in a poor crop of one of our favorite fleshy fungi, the Chanterelles, August so far has had good rainfall. We could have eaten another savory mushroom, Leccinum insigne (lek-SY-num in-SIG-nee) until they came out of our ears, so plentiful were they. These large colorful mushrooms are found growing in Quaking Aspen groves.

Some people consider fungi as the Third Kingdom, animals and plant being the other two. Fungi have no chlorophyll, roots, true stems, flowers, seeds or leaves. In a sense they don’t even resemble plants. And bear in mind that all fungi are not what we call mushrooms.

Macro-fungi are the woody or fleshy fungi easily seen, enjoyed or eaten by people. This group includes the mushrooms. Micro-fungi are microscopic and include yeasts, various ferments, parasites which harm crops, molds which damage food, numerous agents of disease and valuable antibiotics.

When we look at a mushroom, we are viewing the fruiting body, much like an apple is to an apple tree. The vegetative part of the mushroom, the mycelium, is generally hidden from view either in the soil, a tree, or within a pile of rotting wood. The cobweb-like mycelium branches out within the various materials from which it derives nutrients.

Mushrooms in a way are like people in that they are entirely dependent upon other organisms for their sustenance. And like humans, the study of mushrooms is an endless subject.

Many people wouldn’t dream of eating a wild mushroom, preferring to limit their association with this mysterious and wonderful group of plants to their pure esthetic value. 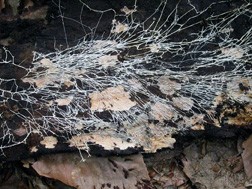 The vegetative part of the mushroom is called mycelium and often is hidden in the soil, under humus, in rotting trees or under loose bark.

It is wise to purchase a very good, recently published, mushroom field guide that covers species found in your area. Read it from the beginning to learn important details of observation and proper ways of noting all the parts of the mushroom. Does it have a cap and stalk? Are there gills under the cap, or are there tubes or spines?

One of the most poisonous species, the deadly white Amanita, has been found in several Door County parks and can be confused with an edible type with a few similar characteristics. Go out on a hike with an experienced mushroom hunter and learn how to do field identification of species.

At the other end of the scale are those folks who are so eager to eat wild mushrooms that they would be perfectly willing to trust our determination of edibility from their description over the telephone. These same people will pay hundreds of dollars to a doctor or lawyer for medical or legal advice, yet they expect free advice from us regarding wild mushrooms, a food that could mean life or death!

Inspectorates were established in France in 1925 to identify wild mushrooms sold at the markets, to ensure the buyers that the mushrooms they were getting were safe to eat. One of the mushroom inspectors himself died at Fougères in 1930 as a result of eating poisonous mushrooms.

The delicious and completely inoffensive mushroom can become very dangerous with deterioration. In the case that you do collect and eat wild fungi, eat only those that are totally free of insects and are in perfectly fresh condition. Unless you are absolutely positive of identification, beware of the so-called “button” stage of mushrooms. It is too easy to make your last mistake. 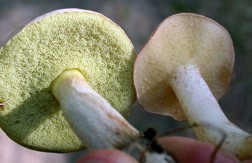 Some mushrooms have tubes under the cap rather than gills. Here are two very different species of tubed mushrooms. Note the size, color and form of each.

Should you have proudly reached the stage of finally accurately identifying one or two species of edible mushrooms and are now ready to eat them, don’t make a pig of yourself. Go easy at first. Just as some people are allergic to milk or chocolate, so too are some individuals sensitive to various mushrooms.

Eating mushrooms may amount to only a tiny fraction of the total enjoyment obtained from the exhilarating hike, discovery, and identification of the prized specimens.

The “Little Birch Shell,” Lenzites betulina, I have photographed in the past proved to be more and more interesting the more closely I examined it. Mycology, that branch of botany dealing with fungi, certainly is a fascinating study with dozens of good catch-hold points, such as photography, microscopy, painting, ceramics and other crafts, dying fabrics, reading folklore, and the challenge of accurate identification.

As Charlotte often tells her students of mushrooms, “Crawl around the woods on your hands and knees. Get down to the level of the mushrooms!”

The mushroom season has arrived. To the woods, to the woods!