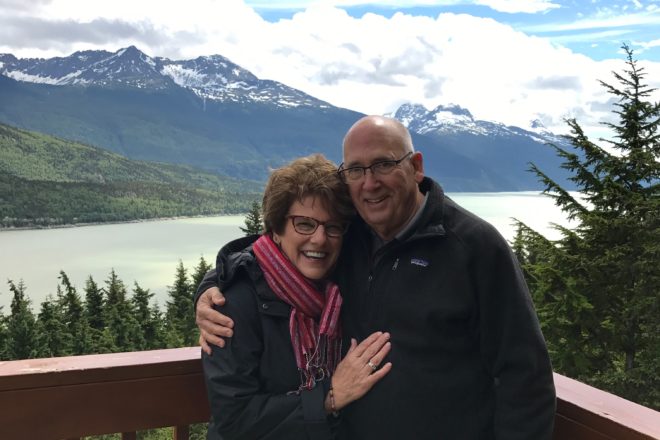 Anything that turns a country’s economy topsy-turvy – a recession, depression or seemingly endless pandemic – can be counted on to disrupt giving to charitable organizations.

But Bret Bicoy, who has headed the Door County Community Foundation since 2008, said 2021 was its best year ever, with more than $15 million in giving, including between $1.2 million and $1.3 million to the Emergency Response Fund.

“In per capita terms,” Bicoy said, “that amount of giving is just staggering. And we wouldn’t have had a penny of it if it weren’t for Tom Herlache’s role in leading a small group of people to create this organization in 1999.”

That, plus dozens of other reasons, is why the Door County Community Foundation is proud to honor Herlache and his wife, Jill, as the 2022 Philanthropists of the Year.

Tom was familiar with the success the Marinette/Menominee Foundation was having in helping nonprofit agencies keep philanthropic donations at work in their community. And he knew that the Greater Green Bay Community Foundation had helped that newer foundation get started.

The “founding fathers” who signed the Articles of Incorporation on Aug. 16, 1999, were Tom Herlache; his younger (by 19 minutes) brother, Dr. John Herlache; Mike Felhofer; and John Gilman. Felhofer had lost his first wife, Nancy, a year earlier and had turned to the community foundation in Green Bay to establish a memorial for her. Gilman, a member of the Greater Green Bay Community Foundation, helped Tom to organize his thoughts about how to approach starting a similar organization here.

Decades earlier, Tom Herlache had earned business and law degrees at the University of Wisconsin-Madison, but he hadn’t yet found a law firm he wanted to join. His father, then president of Baylake Bank, suggested that he join the bank temporarily to expand and oversee the trust department – a job that enabled him to connect with the community on many levels of business and philanthropy. He was never tempted to leave the “temporary” position and became CEO of the bank during the early 1980s.

Felhofer said that one of the first things the fledgling organization did was to establish a three-part mission.

“We wanted to be a vehicle to accept and disburse philanthropic gifts wisely in the community,” he said, “to provide a way for people of moderate wealth to establish and build a philanthropic account over time, and to help smaller nonprofits that often struggle with managing their financial resources do so more effectively. We also wanted people in the community to understand that you don’t have to be super wealthy to be a philanthropist.

“Tom deserves tremendous credit for pulling the initial group together,” Felhofer said. “The Community Foundation brings a level of professional management to a nonprofit that allows it to concentrate on its mission.”

“We serve as a matchmaker, a facilitator of relationships,” Bicoy said. “We go out and find agencies that are doing good things, that are working in the community, and connect them with donors who might be interested in supporting their work.”

All of this is possible because Tom Herlache recognized a need 23 years ago and envisioned a way to meet it. But it wasn’t his first community effort. A list of his service to Door County encompasses more than 25 organizations, including years on the Sturgeon Bay Common Council and Door County Board of Supervisors, plus service as the past president of Sturgeon Bay Utilities and the local Rotary Club, as well as former Rotary district governor; as chair of countywide fund drives for United Way and the Cancer Society, plus the Sunshine House Building Fund Drive; on the board of directors for both Door County Medical Center and the Medical Center Foundation and chair of the latter; and through longtime work with the Sturgeon Bay Planning Organization, Waterfront Associates Board, Waterfront Redevelopment Authority and Harbor Commission.

But not every group Herlache works with has a high public profile.

“He put a lot of effort into the weed-control committee and has served in almost every volunteer position at Hope United Church of Christ,” John said. “He has a big heart. He’s always loved Sturgeon Bay and Door County and has a huge interest in making life better for everyone.”

Jill Herlache has more than earned her Philanthropist of the Year honor as well, not only co-chairing the Door County YMCA’s capital fund drive with Tom, but also serving as chair of the boards of both the Y and Peninsula Players Theatre. She has also been an active member of the Door Community Auditorium board, PEO, the Moravian Church and the Rotary Club of Sturgeon Bay.

Cari Lewis, executive director of Door Community Auditorium (DCA) since 2010, worked with Jill Herlache while she was on the board there.

“She’s the kind of woman who remembers every detail,” Lewis said. “She’s a wonderful person to have involved in an organization like the DCA because she knows everyone and is great at making connections work. She’s very generous and encouraging to others – a lovely individual.”

And, as everyone who was interviewed pointed out, it’s not possible to divide the couple’s contributions into “his” and “hers.”

“What an incredible partnership Tom and Jill are, supporting one another in so many philanthropic activities,” Bicoy said. “They have been essential in making project after project go. If one of them is taking the lead on something, you know the other one is also involved behind the scenes. It’s an inspiration to see how they have worked together to make Door County a better place for all of us.”