If Tom Harrer were greeted with a checkered flag when he finished his bus route for Gibraltar Schools, it wouldn’t be his first encounter with one. Before driving the big yellow, he was a professional racecar driver and knew the excitement of winning.

But parents should not worry that Harrer’s bus will be rounding corners on two wheels or spinning donuts on Highway 42 as their children stare wide-eyed out the windows. Harrer has no interest in being the fastest school bus driver in the county. However, he feels that his experience as a racecar driver and the focus and concentration that it has given him, might make him one of the safest bus drivers. 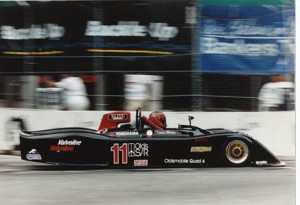 Tom Harrer’s path to driving school buses started in his hometown, Madison. He began a career in investments, but later decided to invest more of his time in his hobby, racing.

“I had always been fascinated with racing cars,” Harrer said. “In my early thirties I spent time with a friend who raced and helped him work on his car. After a couple of years, I decided to race myself.”

Harrer bought a Triumph TR-4 that had been stored in a barn. “That was my technical learning experience,” he said, “building it from the ground up. But I realized that what I wanted to do was not fix a fragile old car that should never be raced, but get into a real race car and focus on the racing, not the repairing.”

However, the experience with the TR-4 was valuable. “Having driven the Triumph,” he said, “made me literate so that I could talk with mechanics about what was going on when I started racing real racecars.”

In 1984 he began racing professionally along with continuing to drive in amateur competitions. His “real” racecar was a sports racer, a purpose-built racecar with an Oldsmobile Quad 4 engine.

“I hired a mechanic to prepare my car,” Harrer said, “and he turned out to be more than a mechanic. He was an artist in metal. We became partners and formed a racing business, using my business acumen and his mechanical genius.”

In the hierarchy of professional racing, drivers may begin with the SCCA (Sports Car Club of America) sanctioned amateur races such as the Formula Ford events, and then move on to the pro races, the Oldsmobile Sports race car competitions, the Formula Atlantic, the “Indy” Lites, and ultimately, the “Indy” (Indianapolis 500 style). 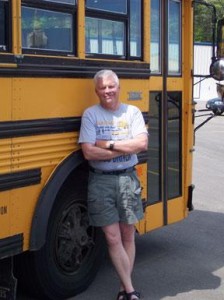 However big purses are not the payback for racing. “Tin cups and points,” he said, are the reward in amateur races, and in the pros, “Prize money won’t pay the cost of a weekend of racing. The money, if you’re making any, is in sponsorships.”

But from the perspective of his son Max, Harrer’s biggest accomplishment was beating Walter Payton who drove race cars for a couple of years after he retired from the Chicago Bears.

Payton became friends with Harrer’s daughter Ellen who was about four at the time. “He used to kneel down to talk to her,” Harrer said, smiling as he remembered the size different between the giant football player and his tiny daughter.

“I might have been really good,” he said, “if I’d started younger.” Many racecar drivers begin in their teens rather than their thirties.

Even with his late start Harrer found success racing his Oldsmobile Sports Race Car, marked with number 11 and his name. He consistently placed in the top ten each year.

And there was his brush with fame. “I was written up,” he said, “and the fans were neat, particularly the kids. They’d ask for autographs.

“I liked the camaraderie, inter- and intra-team [of the sport],” Harrer said. “It’s a very small community; people became closer and were quick to support one another.”

He also enjoyed the intensity of the focus, “especially on those rare occasions when you pulled off the whole lap, were pleased with it, and it became almost a meditative experience.”

Racing can give a Zen-like feeling when the driver is able to live in the moment, when he has the ability to not let the adrenalin overwhelm him, but can focus it. “Time slows down,” Harrer said, “and you have forever!

“When the race is going well,” he continued, “I can almost see a car doing something before it does. Living absolutely in the moment, I don’t care about the past or anticipate anything but the next moment.”

Harrer is philosophical about crashes on race tracks. “There are very few accidents,” he says. “There are crashes.”

He has not had many. “I had the ability to find the limit without going beyond it,” he said. “I kept pushing until the car would squirm, and then not push more.”

While seatbelts and gear help protect a driver, so do the cars. “They are designed to turn to junk,” Harrer said, “absorbing the energy of the crash.”

His worst crash totaled the car. The incident occurred during a test, though, rather than a race. But he walked away from it with relatively minor injuries, in part because of the fitness regime that included running, lifting weights, and even an aerobic dance class for balance.

However, fitness was not only important for dealing with the possibility of injuries, but for the endurance of the driver in the vehicle. “I had fireproof underwear, a fireproof hood, a driving suit with two or three layers of fireproof material,” Harrer said. “Heat-wise, it was like wearing a snowsuit!”

But the helmet and driving suit fulfill another function. “Race car drivers tend to be shy,” he said, “as do a number of actors, like Paul Newman who was both an actor and racecar driver. When you put on your gear, you become a different person:  now you are a racecar driver!”

In 1993 he retired from racing. “I was competing against drivers much younger than me,” Harrer said. “The last year I tried to race just for fun, but I couldn’t not care if I didn’t win. And my hands and eyes were not what they were; I knew better than to take the chances that I once did.”

“My family has been a part of Door County since the late 1800s,” he said. “There has always been a family cottage.”

Bud Kalms, who was bus supervisor for Gibraltar Schools at the time as well as Ellen’s bus driver, learned that Harrer had a commercial license. Kalms asked Harrer if he was interested in becoming a substitute bus driver and sent a test study guide home with Ellen.

“I was semi-retired at the time,” Harrer said, “and it intrigued me, a contribution I could make to the community.”

When Kalms stopped driving bus, Harrer took over his route, and the racecar driver became a bus driver. “A similar kind of stress!” he joked.

But on a serious note he added, “The same things that made me a pretty good race driver make me an extremely safe bus driver.”  Good drivers are not racing for the risk, he explained, but have “an ability to respond to the world around them without thought interfering.” They know what to do without thinking about it.

“I know how quickly things can go wrong with a vehicle,” he continued, “which keeps me focused, in the moment.”

And Harrer, according to his wife Ann Lynaugh, has in interest in anything with a motor.

“I have a ticket to ride!” he jokes. “Looking back, I find myself licensed to operate almost anything that rolls, floats, or flies. I didn’t start out with that as a goal, but I was a flight instructor and a charter pilot, and I have a Coast Guard captain’s license and a commercial license.”

He takes satisfaction in being competent with a vehicle whether it’s a racecar or a school bus. And if you happened to see Tom Harrer driving his Gibraltar bus route next Halloween, you might catch him in his race car outfit, in costume for the kids.