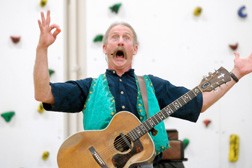 Kids of all ages, get ready to sing along with Tom Pease at the Baileys Harbor Town Hall on Sept. 15 from 3 – 5 pm. Pease will appear in concert as part of Baileys Harbor’s Autumn Fest activities, courtesy of The Ridges Sanctuary.

The Ridges received a Green Fund grant earlier this year from the Door County Community Foundation to support the concert as well as a series of in-school presentations by the popular musician. The school programs will provide students with an opportunity to learn about the environment in a fun and interactive way.

Pease has performed full-time (200 shows yearly) since 1982. With movement, sign language and humor, he leaves audiences laughing and singing. Highly animated and interactive, his concerts celebrate themes such as reading, self-esteem, the environment, cultural diversity, and the joy of laughter. Pease connects and inspires with every performance.

Pease was born and raised in Burlington, Iowa along the Mississippi river. Its surrounding bluffs gave him the foundation for his love of the natural world. Eventually, this led him to teaching environmental education in California, where he first began singing with kids.

Admission to Tom Pease in Concert is free.