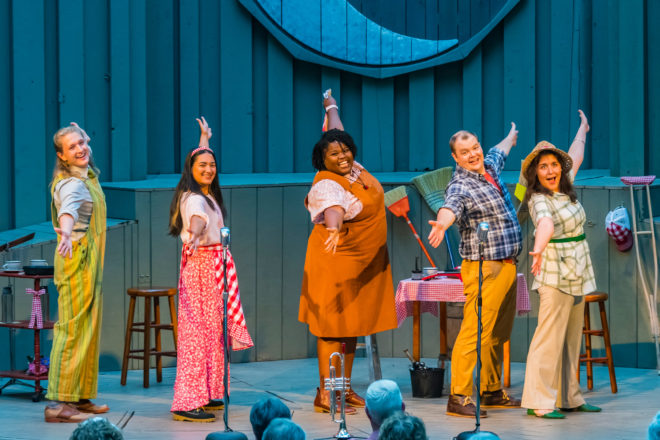 I spent most of my high school years – and a handful of my early-adult years – involved with a local community theater, both on the stage and behind the scenes. So my initial reaction to seeing and writing about Northern Sky Theater’s production of Tongue ’n Cheek was an enthusiastic “yes!” But, after doing some quick math, I realized that nearly a decade had passed since my “theater days,” and – confession time – I’d seen only one other show at Northern Sky Theater during the six years I’ve lived here. Gulp. Maybe someone more well versed in the theater should take my ticket?

But as I waited for the show to begin – with my husband, who had seen one fewer show than I had in the seat to my left – I glanced around at the nearly filled benches in the Peninsula State Park amphitheater to see a mix of people of all ages – and even a couple of dogs in the back row – who were all there to take in a professional theater performance. Perhaps some had seen earlier versions of the show when it premiered in 1991 and was reprised in 1997. Others, like us, were seeing it for the first time.

I was jolted from my observations when the narrator, played by Anna Cline, and the production’s “one-man band,” Andrew Crowe, burst onto the stage, welcoming the crowd not only to that evening’s performance but to the return of live theater in the park after a year’s hiatus.

With the dust from a year like none other still being swept from the corners of the stage, there were some noticeable post-COVID-19 modifications, such as the printed playbill being replaced with a digital version. And, at the top of the show, the actors came on stage, one by one, to tell the audience which character they would be playing.

When Fred Alley, who co-founded American Folklore Theatre – the predecessor to Northern Sky Theater – wrote Tongue ’n Cheek, he did so as a tribute to old-time radio dramas. And although this version weaves in more elements of a stage performance, the overall show is reminiscent of an extended skit à la A Prairie Home Companion. It’s infused with that same style of hokey quirkiness and sappy warmth that makes a person smile, as well as songs and dialogue with just the right balance of puns and humor to make you roll your eyes while genuinely laughing.

With help from the narrator, the audience is invited into the lives of the show’s four characters: tired and overworked Naomi Sutter (Lachrisa Grandberry); her work-averse husband, George Sutter (Dan Klarer); love-struck Doc Johnson (Isaiah Spetz); and the object of his affection, his neighbor Lorna (Jamie Mercado). When the audience first meets the foursome, Naomi and George are at a crossroads in their marriage while the unorthodox, yet playful Doc Johnson decides to shift his focus from peddling his cure-all elixir to the pursuit of the seemingly uninterested Lorna.

Despite the cast’s small size, the characters they portray are larger than life and undeniably likable. The dialogue is playful and quick, which causes the audience to lean in a little closer so as to not miss the next line, the next pun, the next quip. The cast members – along with the multitasking musician, Andrew Crowe – deliver a wallop of a performance, often playing an instrument or a few, and send out jaw-dropping harmonies normally reserved for much larger ensembles.

Throughout the performance, the recurring act of inviting the audience into the story, of breaking that fourth wall, seems to have a larger impact here. Perhaps because following a year of physical separation from the world and the people around us, a show that intentionally connects the actors with the audience seems to be the perfect choice – or, as Doc Johnson might say, “the cure” for the need we’ve all felt to connect with others again.

The only downside to the lighthearted, music-filled theatrical romp is its shorter-than-usual running time at just 68 minutes. During the final song, “Waltz until the Last Cows Come Home,” I noticed several audience members singing along, likely reminiscing about the first time they saw this show decades earlier, and probably not wanting the fun to end.

As the cast took its final bow, I realized that part of what makes a Northern Sky Theater experience what it is, is its ability to create these connections: between the actors and the audience, between the story and the audience, and among the audience members themselves. It’s live theater that’s professional but accessible, and polished but never pretentious. And whether you’ve seen one or 101 shows, you want to return for more of that connection season after season.