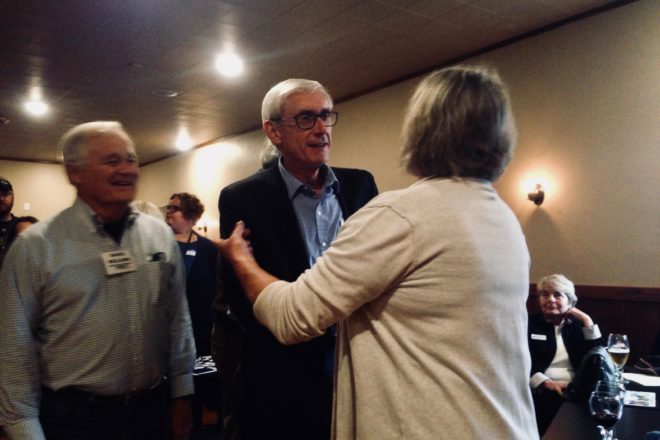 An energized crowd greeted state school superintendent and Democratic gubernatorial candidate Tony Evers for a rally at the Union Supper Pub in Sturgeon Bay on Oct. 27. He brought with him Gov. Jay Inslee of Washington state, who also serves as chair of the Democratic Governors Association and has emerged as a major critic of President Donald Trump’s policies. Inslee’s name has been floated as a 2020 presidential candidate.

Evers began on a high note by avoiding the trio of Republican agitators stationed outside the pub, one weirdly dressed in a cat suit as the “Democat” and another standing at ready with a video camera, but Evers foiled them by entering the place from another door.

After words from Will Gregory, chair of the Democratic Party of Door County, and Sen. Caleb Frostman, who is hoping to retain the seat he earned in June through a special election that Gov. Scott Walker was forced to call, Evers took the stage with these words:  “I’m Tony Evers and I’m going to be the next governor of the State of Wisconsin.”

That statement drew cheers and applause, but there were oohs and aahs when he said he grew up in Plymouth, Wis., cheese capital of the world, where he met his future wife in kindergarten. They went on their first date for junior prom. Had three children. Graduated from the University of Wisconsin with degrees in biology and chemistry. Went into teaching. Taught biology at schools all over the state before moving into administration and eventually being elected three times as state superintendent, the last time with 70 percent of the vote.

Evers was introduced as the education governor, a name that Walker, much to Evers’ amusement, has assumed despite the strategy of divide and conquer that he espoused during Act 10 in his first year in office, a move that Evers described as “Let’s make the people who do the work at our schools and the public employees in the state our enemy.”

Evers pared his campaign down to a four-pronged approach:

“I can’t wait to win this race,” Evers said.